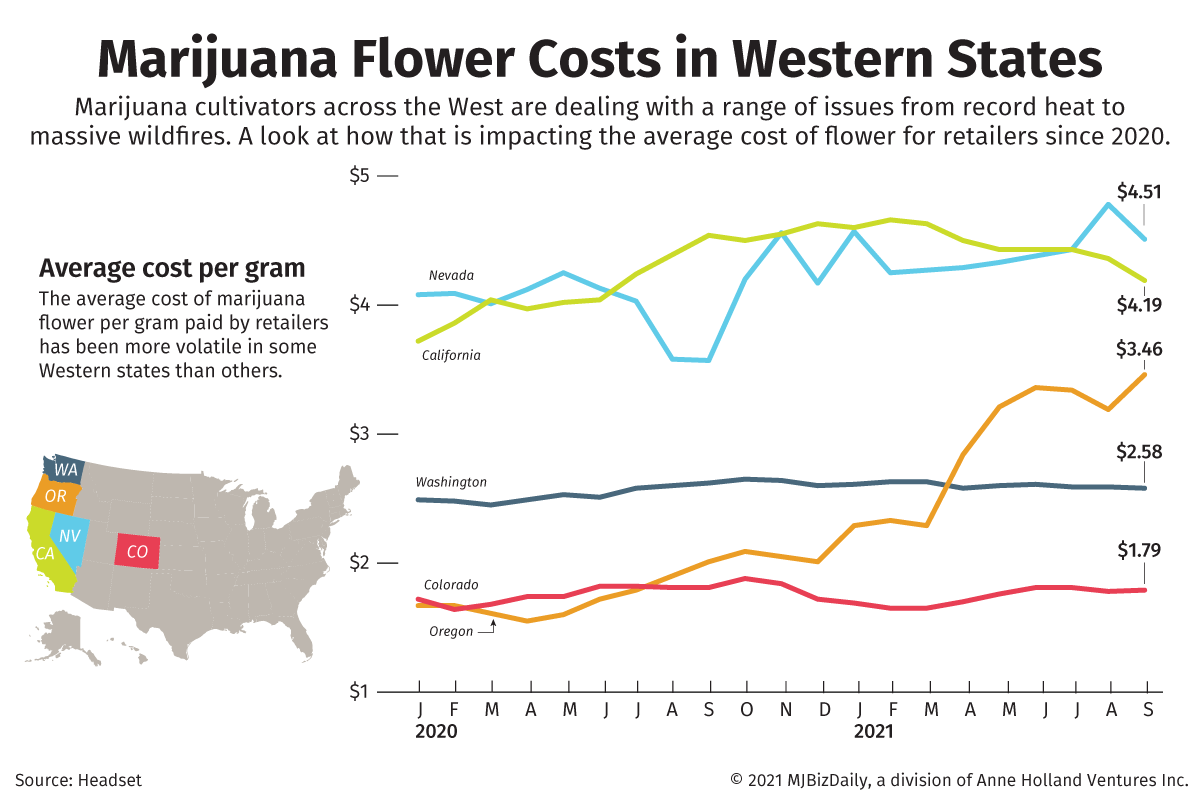 From wildfires to record heat to prolonged drought, outdoor marijuana cultivators across the American West had more than a few obstacles to contend with this year.

On top of that, market prices are falling in some Western states – including California and Nevada – as marijuana production capacity continues to expand (see chart above.)

Data from Seattle-based analytics firm Headset shows that, from September 2020 to September 2021, market share for cannabis flower shrunk in each of the following states:

So how tough is the outlook for this year’s harvest? Depends on whom you ask.

MJBizDaily caught up with growers across the American West to see how harvest is shaping up this year.

Here are their thoughts in their own words (comments have been edited for length and clarity):

The weather has been colder than previous seasons.

And there was wildfire smoke, which blocks light and causes an elongated bud structure and leads to depressed growth of the plants in general. That’s led to lower yields.

Because prices were so good in 2020, people upped production in 2021. In 2020, we all got the Ferrari and drove it around the block. There was a lot of money to be made last year.

But 2021 is a pretty dismal season for the California market. There is still full-season cannabis on the market from 2020.

Last year, the market was more than $200 a pound for bucked biomass.

This year, we’re looking at $100-$150 a pound for machine-trimmed biomass, which means a lower price and a lower weight. Cannabis is 25%-50% heavier when it’s just bucked. Plus we have the labor and time costs involved with trimming.

The cost of compliance and taxes haven’t changed. It’s more than I’m selling the pound for.

The goal this year is not to make money but just break even.

This has hands-down been our best year ever. We’ve worked out a lot of agricultural efficiencies. It’s looking more beautiful than it ever has before.

It was hot. We essentially had August heat in July. But we didn’t have any issues with smoke near us. We’ve had mostly blue skies where we are in Lake County.

Wholesale prices are pinching us, but we’re lucky because we’re vertically integrated, both a cultivator and a brand.

When the market is selling for $1,000 a pound, that’s one thing. But when it tanks, that cultivation tax is really hard to swallow. After taxes, it squeezes the margin out.

Until this year, the wholesale market hasn’t had a correction. This is going to be the new norm so people have to get used to it.

We’re in an extreme drought situation here. A lot of farms are not allowed (to use) delivered water, and many farms were dependent on this.

We have a pond, but we had no rain after April, and it usually goes all the way into June.

The plants are a good size. It’s not so much the plants but the market.

It’s $500 for a pound of top-grade cannabis wholesale. Last year, it was about $1,200 a pound. That’s really put a sledgehammer to the farmers.

There’s just not enough places to sell the weed. So it’s a race to the bottom between the farmers just to sell anything.

People are just giving up right and left.

But we are looking forward to our crop coming and bringing it to people. There was a very good feeling at Hall of Flowers among those of us still surviving.

With the in-field sensors scattered throughout the grow we use to gauge how the plants are performing, all signs are pointing to a good year.

We don’t anticipate the early spring moisture will impact yields. Moisture in the last two weeks of May and early June delayed planting but didn’t stunt the plants.

We’re not worried about wildfire smoke tainting the flower. The lower light levels may have been a positive for us. When the skies cleared, it was almost a natural gradual increase in light that may have had a hidden benefit.

The prices on the market have been staying pretty high.

I don’t see a change in the pricing of the Nevada market. Demand is going to keep going up.

Las Vegas is the best cannabis market in the world.

I like the concentrate market because it’s unique. People are embracing it a lot more than just flower.

I’ve never seen a market not take good product. If you can grow good product, you can keep going.

This is going to be our single-best grow.

The smoke didn’t bother the outdoor plants. We got a nice douse of rain the other day. No mold so far.

We’re harvesting in the next two weeks. Manufactured products are going crazy.

Wholesale prices fell because the media said Oregon and Portland were on fire, and tourism dropped.

Harvest is going well, but it’s been a challenging year for everybody.

Farmers struggled to keep their plants from flowering too soon because of heat and overall dry weather.

Growers are struggling to sell product because isolate is being sold into the regulated market.

Some farmers and wholesalers are saying the isolate is absolutely depressing the market.

Other, third-party marketplaces are saying it’s because of autoflower. I think it’s both.

Overall we’re hopeful to be pleased with the outcome. It was not a tremendous year from an environmental standpoint.

We had a historic heatwave and record-breaking heat.

During that heatwave, there was a heat dome over the Okanagan Valley and Oroville for a couple of weeks hotter than Las Vegas. Temperatures were 116 during the day and 95 at night.

Our beneficial bugs started to die in the heat, and the bad bugs were reproducing on steroids.

Our cost of production went up because we had to buy 60%-70% more good bugs.

Water consumption went up. That all overlapped in a manner that we haven’t seen in the past.

Wholesale prices for flower are about 10-20% lower than last year.