Attendees check out the show floor at the 2021 Hall of Flowers conference this week in Santa Rosa, California. (Photo by John Schroyer)

Cannabis retailers, growers and businesspeople of varying stripes reported an upbeat outlook at this week’s Hall of Flowers conference in California, saying they’re bullish on prospects for expansion and increased sales coming off a year of pandemic shutdown that tilted many consumers toward legal marijuana.

“Business has been good. The pandemic has really hit the wellness category pretty significantly, but we managed to survive,” said Allie Greenstone, a sales rep in the San Francisco Bay Area for BellRock Brands, which owns Dixie, Mary’s Medicinals, Rebel Coast and other brands.

Most show attendees were delighted to mark the return of in-person conferences since the COVID-19 pandemic halted such events. The Hall of Flowers at MJBizCon Experience is set for Oct. 20-22 at the Las Vegas Convention Center.

But there was also an acknowledgment that the coming months and years will not be easy for many in the California marijuana industry.

The illicit market, for example, remains a concern for many legal cultivators and retailers, underscored by this week’s disclosure of a lawsuit filed against California regulators. The suit alleges cannabis regulators “turn a blind eye” to the diversion of millions of pounds of legal marijuana to the illicit market.

One Hall of Flowers panel featured Catalyst Cannabis CEO Elliot Lewis, whose company filed the lawsuit against the Department of Cannabis Control (DCC). Catalyst’s parent company, HNHPC, is the plaintiff in the suit.

The case reflects an ongoing frustration among many legal cannabis businesses over the ongoing competition from the untaxed underground market.

“That’s exactly what we’re competing with, is the black market still,” said Alexis Mora, the head of marketing for Oakland-based Harborside, a vertically integrated operator.

Catalyst’s Lewis said the failure of the California regulatory system spurred the suit.

He added that his company is focused on opening more cities and counties to legal cannabis retail shops, since a vast majority of the state remains off-limits to legal operators because of local bans.

“We’re writing initiatives up and down the state,” Lewis said. “We go out there, city by city, and we fight” to win more retail licenses both for Catalyst and for the industry at large.

After his panel appearance, Lewis told MJBizDaily there will likely be local ballot measures in 2022 to approve more marijuana markets in El Segundo, Manhattan Beach and Redondo Beach and, potentially, 10-12 more.

A new market entrant, Joseph Brock – whose Los Angeles-based brand Mad Weed for Cheap has had trouble finding retail shelf space – asked Lewis and his co-panelist, an executive from San Jose-based Airfield Supply Co., how he could get meetings with each of them to try to persuade them to start carrying his products.

Brock said his product line even includes 10-packs of infused pre-rolls that he can sell for as little as $10 a pack, which retailers typically mark up to $20-$23 a pack.

Despite that low price, he’s had trouble getting into stores.

“Getting on the shelves, the difficulty is nepotism,” Brock told MJBizDaily after the panel.

He said he attended Hall of Flowers in hopes of networking and developing his Rolodex.

“You have a lot of these people from the gray market who have a black book with all their contacts,” Brock said.

“Someone like me, who has a sales and distro team … they don’t have those same connections.”

Mora said the retail atmosphere in the California marijuana market is getting “ultra-, ultra-competitive” because more businesses are coming online, including delivery operators. That situation makes it tougher for brick-and-mortar shops such as Harborside.

“You have to kind of reinvent yourself and also keep in touch with the trends,” Mora said.

“As an example, flower, which has really been the bread and butter of the industry as a category, is starting to get outpaced by more convenient methods like edibles.

So, it’s really making sure … we have the right products on our shelves.”

Several Hall of Flowers attendees also noted the recent wholesale flower market price crash in California, saying many small outdoor farmers will likely be exiting the industry this year and next.

“A lot of the conversations I’ve had today have been with participants on the wholesale side of the market, and some of them are really getting hurt,” Canndescent’s Fisher said.

“Your outdoor farms that are looking at $300 pounds are just struggling to see how it makes sense, and we know people who are looking at this harvest as their last harvest, this year.”

Tina Gordon, the owner of Humboldt County-based cultivator Moon Made Farms, was one of the few brands representing the Emerald Triangle at Hall of Flowers, and she echoed that many outdoor farmers will not survive this year.

“A lot of small farmers will be dropping out, this year,” Gordon said.

Still, plenty of companies reported ambitious expansion plans for the coming months based on their success the past few years.

Imelda Walavalkar, the co-founder and CEO of L.A.-based flower and pre-roll brand Pure Beauty, said her product line business has grown so much since its inception two years ago that she’s mulling expansion into Michigan in 2022 by partnering with Gage Growth and into New York as soon as adult-use sales launch there.

“From a revenue perspective, we’re growing really well, even though there’s all the talk of flower price compression,” Walavalkar said.

“I think this is our strongest month ever, and we keep going up, sales-wise.”

Like several others, BellRock’s Greenstone said she’s optimistic about the future, although the industry remains “volatile.”

“The way our industry is forced to structure, with insanely high taxes, with (Section) 280E, with our inability to bank, it breeds this culture where we have to consolidate,” Greenstone said. ”

“Personally … I have no interest in working for this industry beyond federal legalization. Because I don’t want to work for a Big Pharma company or a Big Tobacco company, and I feel like that’s ultimately what it’s going to come down to.” 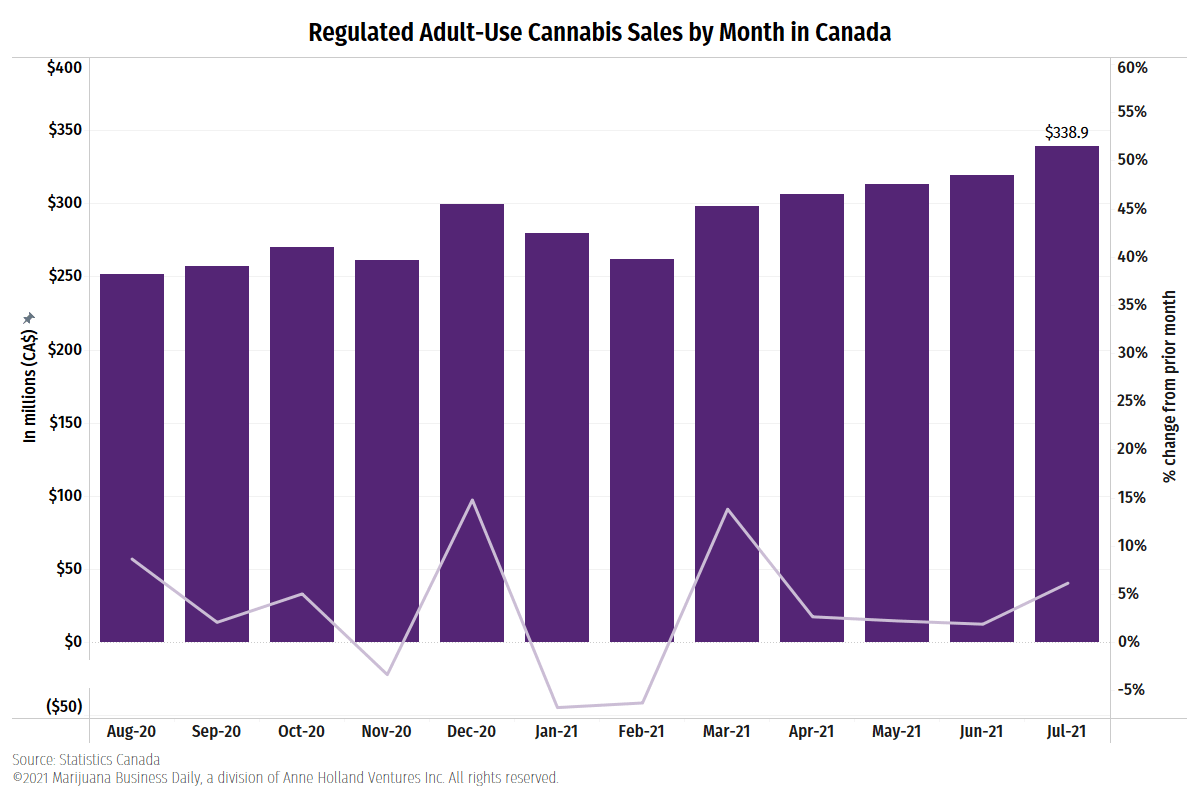