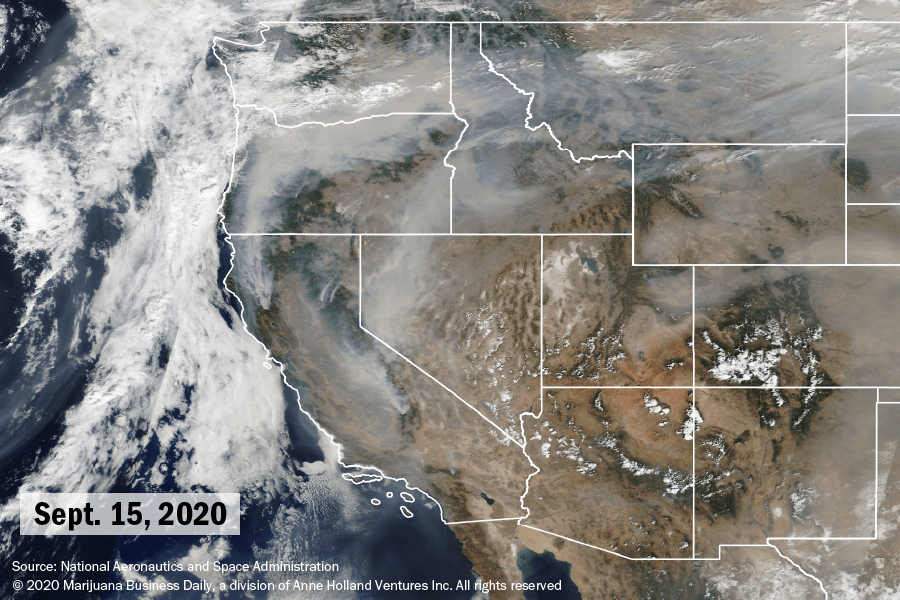 Wildfire smoke swirled over Washington state, Oregon and California for several days in September, dampening sunlight essential for outdoor-grown cannabis plants. The smoke clouds blotted out the sun during a critical phase of a cannabis plant’s growth cycle - when the plant is finishing its production of flower.

The record wildfires that have blanketed the West Coast in smoke and ash also have blocked out essential sunlight and set back the growth of outdoor marijuana plants by weeks, leaving growers with less-than-ideal options for when to harvest their plants.

Cannabis growers in California, Oregon and Washington state are contemplating two choices in the face of wildfires that have burned more than 5 million acres:

All of this further underscores the threat that climate change poses to cannabis and, more broadly, agriculture.

The smoke and ash could diminish both the size and quality of the West Coast crop at a time when cannabis demand has been strong amid the COVID-19 pandemic.

ADVERTISEMENT
Jeremy Moberg, founder and CEO of CannaSol Farms in Riverside, Washington, said the wildfire smoke blocked out the sun in mid-September and put his outdoor-only plants about two weeks behind their usual cycle.

“The crop is definitely small,” he said.

The supply of quality, outdoor-grown flower was already down, according to Moberg, and sales increased during the pandemic. So this setback should only further decrease the supply and cause prices to rise.

Some of Moberg’s plants aren’t as heavy as they should be this time of year, about 70% of normal size, so he plans to wait to harvest for a few more days.

“If the weather holds, there’s no reason not to let things keep growing,” Moberg said.

He typically likes to start taking down his plants by Oct. 5. Waiting to harvest after Oct. 10 means “all bets are off,” Moberg added, and going past Oct. 15, “you’re taking a risk” of running into cold weather.

As for smoke damage to the flower, he said it’s too early to tell.

Moberg also pointed out that the bulk of his plants are grown with light-deprivation techniques where he can control the timing of the harvest, so he already had cut down most of his crop.

Crystal Oliver, executive director of the Washington Sungrowers Industry Association, agreed, saying many growers in Okanogan County, where Moberg’s farm is located, are using light-deprivation techniques and had started to harvest when the smoke hit.

“Growers have advanced their techniques so they’re harvesting before October,” she said. “They don’t want to mess around with the instability of the weather at this point.”

More growers in Washington are also using autoflower, or ruderalis, strains to keep their grow times down, which doesn’t lead to the highest yields, Oliver noted, but bolsters the supply for extraction-grade material.

Wildfires had a similar result in Oregon, where loss of light slowed plant development and might have caused flower to take on smoke taint, said Jesse Peters, a Portland-based grower and CEO of Mantis Growth Investment.

By Sept. 22, Oregon wildfires had destroyed at least seven marijuana companies and damaged at least a dozen more.

Peters is also a structural firefighter in the Portland metro area and was working in a region with cannabis farms nearby.

A “ton” of farms had to evacuate, he said, even farms on the northern side of the state near Portland.

“They had to leave it and hope they didn’t run out of water,” Peters said.

He said the market will have to wait to better understand the impact of the smoke on the supply chain, but he predicts a lot of outdoor-grown material will be turned to extract.

Because the indoor-grown cannabis will keep the market supplied, the shortage of outdoor-grown supply won’t have an impact on the market until March-May of next year.

Peters also expects to see a lot of “Campfire” strains on the store shelves where the flower might taste and smell slightly smoky.

“Nobody’s throwing away their cannabis,” he said. “Some of it will still be good.”

At Aster Farms in Upper Lake, California, CEO Julia Jacobson said that while the closest fire was 40-60 miles away, the smoky skies blotted out the sun.

Jacobson was concerned about possible stunting in her company’s plants, but the skies opened up toward the end of September.

The other concern is that the change in sunlight could signal to the plant that it’s later in the year than it actually is, and the plant will start to finish its cycle early, meaning the flower begins to harden rather than continuing to grow.

Jacobson is also concerned about what the smoke contains, including heavy metals or other toxins.

“Fortunately, the smoke has been superficial and we have not had ash on our plants,” she said.

Jill Ellsworth, founder and CEO of Denver-based Willow Industries, which provides cannabis and hemp decontamination technology with a processing center in Oakland, California, concurred with Jacobson.

She’s hearing of premature flowering of plants because of California’s wildfires.

“Plants are not getting the sunlight they anticipate and are used to this time of year,” Ellsworth said.

When cannabis is stressed out by environmental conditions, it can be more susceptible to microbials.

If the plants aren’t getting the right nutrients to stay healthy and fight off the toxins in the air, that will also affect yields.

“We are hearing that autoflower is the way to go,” Ellsworth said. “If you can have some consistency, then by all means.”