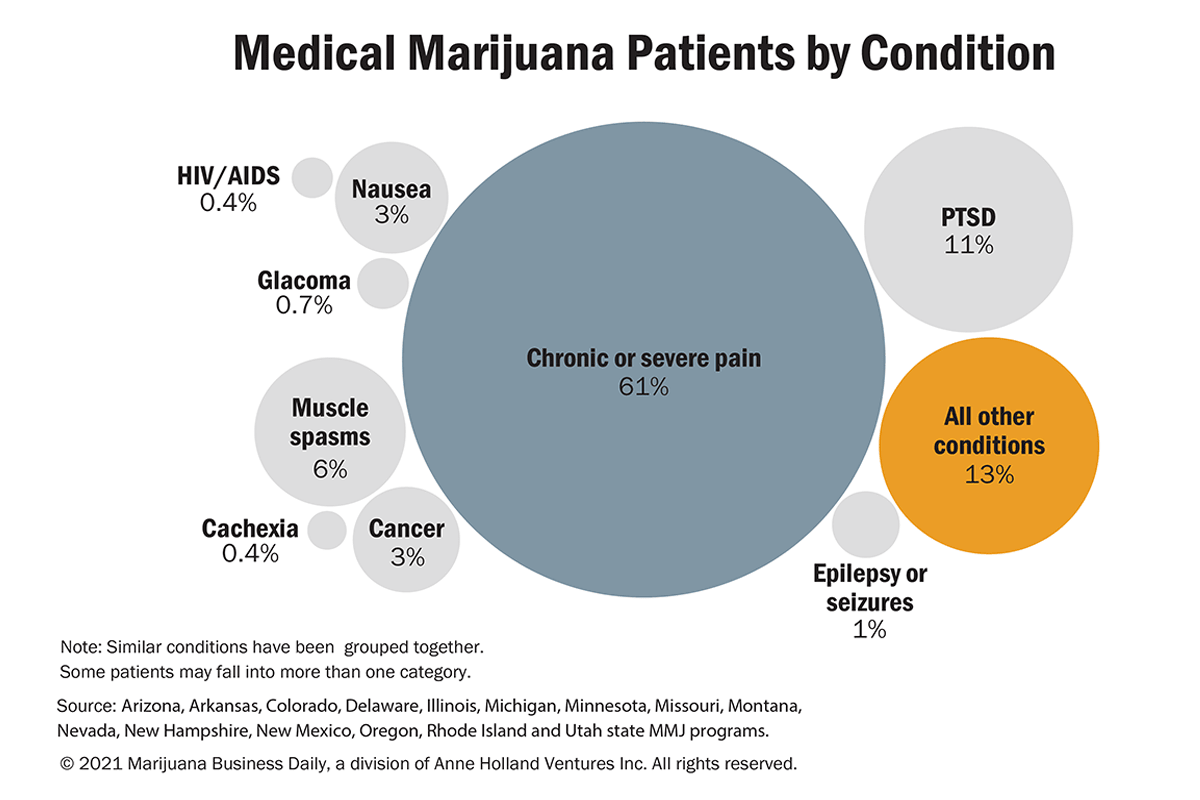 A growing number of physicians see medical cannabis as legitimate medicine, but many remain skeptical if not reluctant to recommend it. That’s left some state medical marijuana programs with a dearth of MMJ-recommending physicians, undermining patient numbers and slowing industry growth.

For example, through the end of March, only 286 physicians were certified to recommend medical cannabis in Texas, a state with roughly 30 million people.

“Texas is 1,000 miles from east to west and north to south. You get out into West Texas, and there can be hundreds of miles between you and the nearest doctor. And who knows if that doctor is registered” in the Compassionate Use Program, said Morris Denton, CEO of Texas Original Compassionate Cultivation, which opened its doors in 2018.

Over the years, numerous other state medical marijuana programs have gotten off to slow starts, in part because not enough doctors were registering to become MMJ recommenders.

That reluctance is a product of multiple factors, including a lack of serious study into the benefits of medical marijuana, a lack of education about MMJ, fear of losing one’s license to practice medicine and stigma surrounding the plant.

“AMA does not support legalization of cannabis for adult use until additional scientific research has been completed to fully document the public health, medical and economic consequences of its use,” AMA President Dr. Susan Bailey wrote in an April 9 letter outlining the group’s cannabis positions.

She added that the AMA does not yet believe medical marijuana’s benefits have been scientifically proven. “Approval and use of any drug must be based on sound, evidence-based scientific research. Our AMA believes that in the case of cannabis, that burden has not yet been met.”

Despite institutional opposition, many doctors who support medical cannabis legalization assert that more physicians support MMJ than the numbers suggest.

“The physicians that I know who treat a lot of these chronic conditions (listed under Mississippi’s new MMJ law) are ready to get into this and prescribe it, as needed, for the people who need it,” said Dr. Matt Wesson, an ophthalmologist from Tupelo, Mississippi, who sparred with the AMA’s Mississippi chapter over the state’s recently passed medical marijuana statute. “I think that there’s a good percentage (of physicians in Mississippi ready to recommend MMJ) because they realize that there’s a need for it.”

Some physicians come around to supporting medical cannabis after watching MMJ programs thrive in their states without the negative consequences that legalization opponents predicted, observers said.

“Physicians are more understanding because they understand a little more about the science,” said Dr. Michelle Weiner, a pain and rehabilitation physician in Hollywood, Florida.

Weiner said when patients tell doctors that their symptoms are improving with medical marijuana, it helps improve the medical community’s impression of the plant. “Physicians are seeing firsthand from patients how well they’re doing with the addition of cannabis into their regimen—and how many pharmaceuticals they’re no longer taking. There’s a substitution effect that speaks for itself.”

Very few recent studies have surveyed physician attitudes toward cannabis, but there are some that suggest majority physician support for medical marijuana.

A 2018 survey by Mayo Clinic researchers of 62 health-care providers in Minnesota (76% of them physicians) found that 58% of respondents strongly or somewhat agreed medical cannabis was a legitimate therapy, while a majority “believed that medical cannabis was helpful for treating the qualifying medical conditions of cancer, terminal illness and intractable pain.”

A survey of 334 pain doctors published in the Journal of Regional Anesthesia and Pain Medicine last year found that a majority believed medical cannabis was a legitimate treatment for pain.

While many national physician groups remain steadfastly opposed, state associations have been more progressive on medical cannabis. For example, after years of opposition to medical cannabis, the 25,000-physician-strong Massachusetts Medical Society changed course in December 2020 with a new policy recognizing cannabis as a legitimate therapy option.

“I would like to see cannabis treated … as something that is part of a person’s health and well-being,” said Jay Broadhurst, chair of the society’s committee on public health and an assistant professor of family medicine and community health at the University of Massachusetts Medical School.

While the progress being made might spare future medical marijuana markets the lack of doctors that has plagued their predecessors, more can be done, physicians said.

Weiner would like to see more medical schools teach students about the endocannabinoid system and have the federal government expand research into cannabis to compile the kind of evidence that doctors depend on in their decision-making.

Wesson believes the best way to change physician attitudes is through education—and, to that end, the cannabis industry should pass its experience to physicians, he said.

“They can let physicians know more about it: what conditions apply, what conditions it helps and the many ways in which it can be given. Also, things like where people can get it and what the approximate cost is going to be,” Wesson said. “The more that we can educate physicians, the more accepted it is going to be. It’s only a matter of time—a few years—until it is an absolutely accepted medication.”