(This is the second article of a four-part series examining how Canadian cannabis companies are expanding globally. Part I ran Aug. 9, and Parts III and IV will be published on Aug. 15-16.)

Canadian cannabis companies eyeing U.S. medical and recreational marijuana markets can encounter a host of legal and regulatory pitfalls, prompting most of the big licensed producers to shun America altogether – at least for now.

“The rule right now is ‘no.’ You cannot do business in the United States,” said Aaron Keay, CEO of Ottawa-based ABcann Global, a licensed producer (LP) that trades on the TSX Venture Exchange under the ticker symbol ABCN.

ADVERTISEMENT
In particular, the company doesn’t want to jeopardize its listing on the TSX Venture Exchange, given the stipulations laid out by the exchange’s parent company.

On its face, the United States is an attractive market:

Canadian licensed producers seem poised to invade the U.S. industry, as many are spreading their wings to gain a first-mover advantage in newly legalized marijuana markets globally.

Most of these companies ultimately want a slice of the U.S. market, which could generate up to $9 billion in retail sales next year, according to the Marijuana Business Factbook 2017.

But several issues have made the United States off limits for some Canadian companies – notably the biggest players.

Catch No. 1: MMJ exports to the United States are a nonstarter. Health Canada won’t issue an export license without an import certificate from a foreign counterpart – which can’t happen in the United States, because marijuana is illegal in the eyes of the U.S. government.

To get around the need for an export permit, some Canadian cannabis companies are investing directly in licensed producers based in the United States.

Catch No. 2: You’ll have a hard time listing on either of Canada’s two largest stock markets. TMX Group – the parent of the Toronto Stock Exchange (TSE) and the TSX Venture Exchange (TSXV) – mandates that its listed companies comply with relevant laws and regulations where they do business.

And because MMJ is illegal in the eyes of Uncle Sam, listed cannabis companies on Canada’s two biggest exchanges are technically not supposed to do business in the United States.

In fact, only one of the five cannabis companies on the TSE has cannabis-related assets in the United States, while around a dozen of the 47 cannabis stocks on the smaller Canadian Securities Exchange (CSE) have U.S. holdings.

Catch No. 3: You might have a limited ability to raise capital. While the CSE is a respected exchange, it doesn’t have nearly the clout, exposure to institutional investors, or access to capital that firms listed on the TSE and TSXV enjoy.

Ironically, U.S. prohibitions blocking the development of the cannabis industry on a national scale are shielding the country’s state-sanctioned cultivators from competing against well-capitalized and more experienced Canadian peers.

Most of the biggest licensed marijuana growers in Canada, behemoths compared to their under-capitalized American counterparts, are holding off on any U.S. expansion plans to avoid breaking laws in either country – and to stay in good standing with TMX Group regulations.

A case in point: The United States is a no-go zone for Alberta-based Aurora Cannabis (TSE: ACB).

“It has to be federally legal. We’ve got to make sure that everything we do is kosher with the exchange,” said Cam Battley, executive vice president of Aurora. “We will not touch anything in the U.S. while it’s federally illegal.”

Two years ago Aurora had a “growth strategy south of the Canadian border” – it agreed to build a production facility in Washington state – but the plan was superseded by the 2015 Canadian election. That plan is no longer in the cards.

“I’m very interested in the U.S. market, but I’m not going there until it’s federally legal, and we are not going to jeopardize our relationship with the TSE,” Battley said.

Saskatoon-based CanniMed Therapeutics (TSE: CMED) says it has a facility in the United States, but it’s not producing cannabis to avoid running afoul of regulators. But “when regulations change it’s something we can and will ramp up extremely quickly,” a company spokesperson said.

According to the company’s website, CanniMed’s wholly-owned subsidiary, SubTerra LLC of White Pine, Michigan, “is a key strategic asset in the Company’s longer-term strategy to service a potential medical cannabis market in the United States.”

MedReleaf’s vice president of strategy, Darren Karasiuk, acknowledged the “substantial” potential of the U.S. market, but said “the company is not currently considering making any investments in the cannabis industry there, and would only consider doing so in the future after consideration of the impact on the company of all laws affecting any such investment and in compliance with all applicable guidance and requirements of the TSE.”

For Smiths Falls-based Canopy Growth Corp. (TSE: WEED), the United States is not currently on its radar.

“International expansion for CGC is only going to be done in jurisdictions where it’s federally legal to do so,” said a spokesperson.

Keay, the CEO of ABcann Global, said he’s keeping an eye on opportunities south of the border and communicates on a regular basis with executives in the country.

But “right now we cannot go down that path because we’re listed on the TSX,” he said. “You can’t right now. But I have my eye on it. It’s the land of some of the biggest consumer products in the world.”

Still, some analysts and Canadian executives are bullish on the U.S. cannabis sector’s potential – and a few licensed cannabis producers have entered the American market.

“We are big believers in the U.S. opportunity,” he said.

Among the five cannabis companies trading on the TSE, only one is actively involved in the U.S. marijuana market.

Leamington, Ontario-based Aphria (TSE: APH), which boasts a “U.S. expansion strategy,” has business interests in Arizona and Florida, and belongs to a partnership vying for a license to grow medicinal cannabis in Ohio.

In Florida, Aphria’s stake in Liberty Health Sciences gives it a financial interest in an MMJ company operating in a state poised to become a major market for medical cannabis.

Scorsis’ strategy involves going into markets that are “completely medical. That’s one premise we will never deviate from. Second, we look at states that do not have canopy restrictions, because that permits us to grow at a scale of greenhouse that allows us to be the lowest cost producer. We also like states that have high barriers to entry.”

With a market cap of CA$100 million ($79 million), Ottawa-based CannaRoyalty (CSE: CRZ) is one of the larger companies on the CSE with investments in the United States.

Marc Lustig – CEO of the marijuana-focused investment company – told Marijuana Business Daily that, regardless of the federal policies, the United States “is the largest opportunity and will be for some time.”

It’s also indirectly involved in Florida, where one of its investee companies, AltMed, agreed to combine its Florida operations with Plants of Ruskin. It’s also looking at Nevada, Massachusetts and Maryland.

“Our whole strategy is surrounding producers with the whole toolbox that they need,” Lustig said. “We’re building a diversified company across different product segments, and across multiple geographies.” 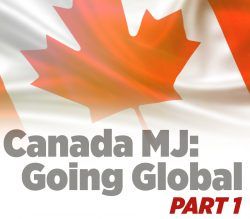