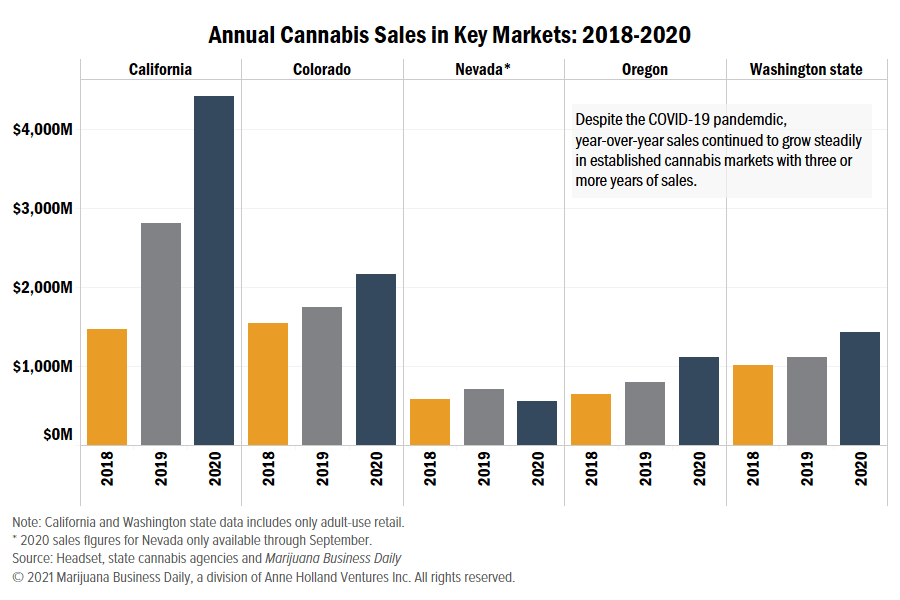 The COVID-19 outbreak that began about a year ago has proved devastating for many mainstream industries – including airlines and restaurants, for starters – but for those in the cannabis business, 2020 turned out to be a record-setter.

Sales of medical and recreational marijuana products smashed former records set in mature markets such as Colorado and Oregon. In emerging markets, including Illinois and Ohio, sales set new, high bars for performance.

ADVERTISEMENT
Looking ahead, industry insiders don’t expect 2021 to be much different.

If anything, analysts said, sales will continue to climb. It’s only a question of how big the numbers will get.

The industry was bolstered after more than two dozen states with functional marijuana markets – as well as the District of Columbia and Puerto Rico – declared their cannabis industries “essential,” allowing businesses to continue operations throughout the  pandemic.

One exception was Massachusetts, where the governor ordered adult-use marijuana businesses to close for two months, while medical marijuana companies were dubbed “essential.”

“A lot of that was probably driven by COVID,” Liz Connors, director of analytics at Seattle-based Headset, said of the record-setting sales levels.

At least some retailers expect the nationwide uptick in sales to only presage a bright future for the industry, given that the pandemic has helped reshape consumer habits, including replacing products such as alcohol and opioids and even sleep aids with marijuana.

“There was a tidal wave of demand” throughout 2020, said Linda Marsicano, spokeswoman for Illinois-based Green Thumb Industries, which has a marijuana industry footprint in 12 states across the U.S.

“And we expect the demand to continue.” 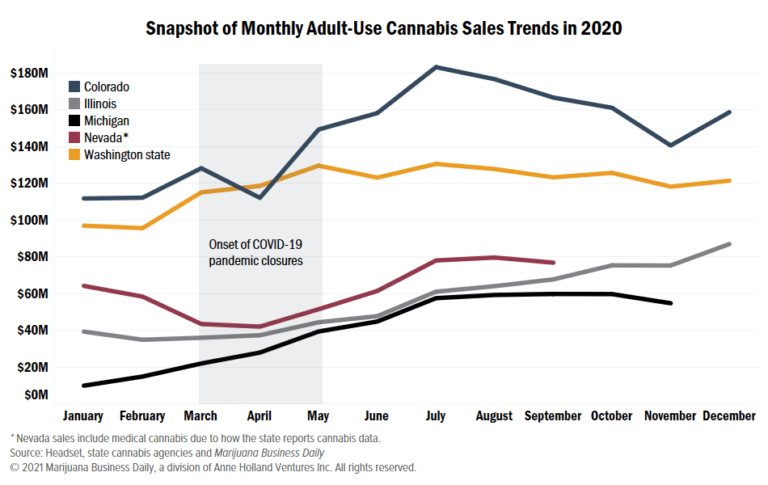 A snapshot of a few marijuana markets across the U.S. revealed that even states that took a hit at points during 2020 – such as Nevada, where tourism dried up for several months starting in March – either rebounded or grew steadily throughout the year.

That was true for both Nevada – where cannabis retailers were restricted to delivery-only sales for months – as well as Massachusetts, where recreational sales were halted altogether from March 24 until May 25.

Even states without final tallies for all of 2020 reported record sales figures, including California, Colorado, Massachusetts, Nevada, Oregon and Washington, according to data from Headset and state agencies.

The most obvious factor that set 2020 apart from previous years was the coronavirus pandemic – which accounted for much of the sales boost, experts agreed.

Andrew Livingston, director of economics and research at Denver-based VS Strategies, agreed and pointed out that most consumers in 2020 were finding other ways to spend money because traditional ways to relax – such as going to concerts and the like – were all canceled because of COVID-19.

So, many consumers pivoted to trying cannabis.

“You can’t be spending $500 on festival tickets, because your festivals are closed. So people have a little bit more money on their hands … that they’re utilizing to relax,” Livingston noted.

But several experts also said 2020 would have been a solid year even without the virus since the legal cannabis industry has been growing steadily for years.

Beau Whitney, an Oregon-based independent economist who tracks the marijuana industry, argues that chalking up much of the sales figures to the coronavirus is a mistake.

“What I’m seeing is that the narrative out there is that you’re seeing 38% growth, 41% growth. You see publications … saying, ‘From January to December, there was this amount of growth,’ and they’re attributing it to COVID. That, to me, is a mistake,” Whitney said.

Whitney points to the growing mainstream acceptance of marijuana.

And while he agreed the coronavirus helped accelerate that acceptance, he believes much of the sales growth stems from organic market maturation and how businesses have continued expanding their footprints across the nation.

“Is that growth going to be sustained in 2021? Yes, absolutely, but it’s not just due to COVID. It’s due to the natural growth of the market, greater participation, greater acceptance and less stigma,” he said.

Some of the data backs up Whitney’s assertion, such as Nevada sales resurging despite a lack of tourism. That suggests local consumption went up, which indicates broader acceptance by residents instead of canna-curious tourists.

Will sales levels continue to rise? Signs point to yes

Experts agreed that while 2020 might have set a new bar for industry performance, it’ll likely be an easy one to meet as the legal marijuana sector continues to grow.

But, DeCourcey cautioned, company owners shouldn’t expect the same astronomical rate of sales growth as the industry experienced in 2020, for various reasons.

“But it’ll be pretty strong growth, nonetheless,” he predicted, citing the opening of more new markets, further maturation of existing ones and various state legislatures that will likely approve adult-use legalization, such as New York.

“The big thing this year is you’ll probably see a lot of states passing rec laws,” DeCourcey said. “2021 is definitely going to be a year of more growth and consistent, strong demand.”

Nic Easley, the CEO and founder of 3C Consulting in Colorado, agreed with that assessment and said the 2020 sales data was “exciting” because of what it portends for the industry’s future.

“This is only the start of positive stories, for years and years to come,” Easley said. “I’m not worried it’s going to slow down, ever.

“It’s only going to get better. It’s going to slow down for certain sectors, or smaller operators, but consumption has become normalized.” 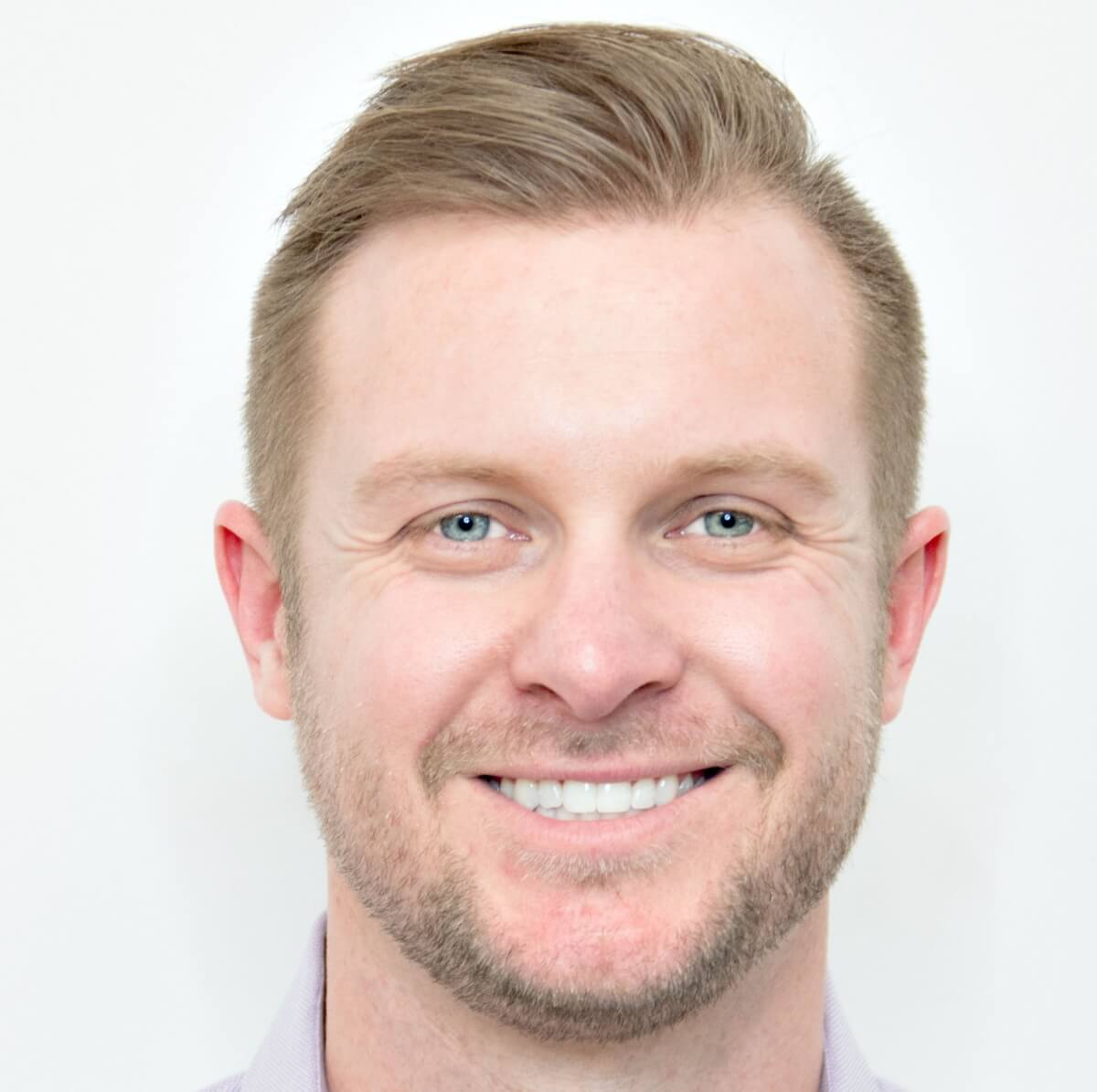 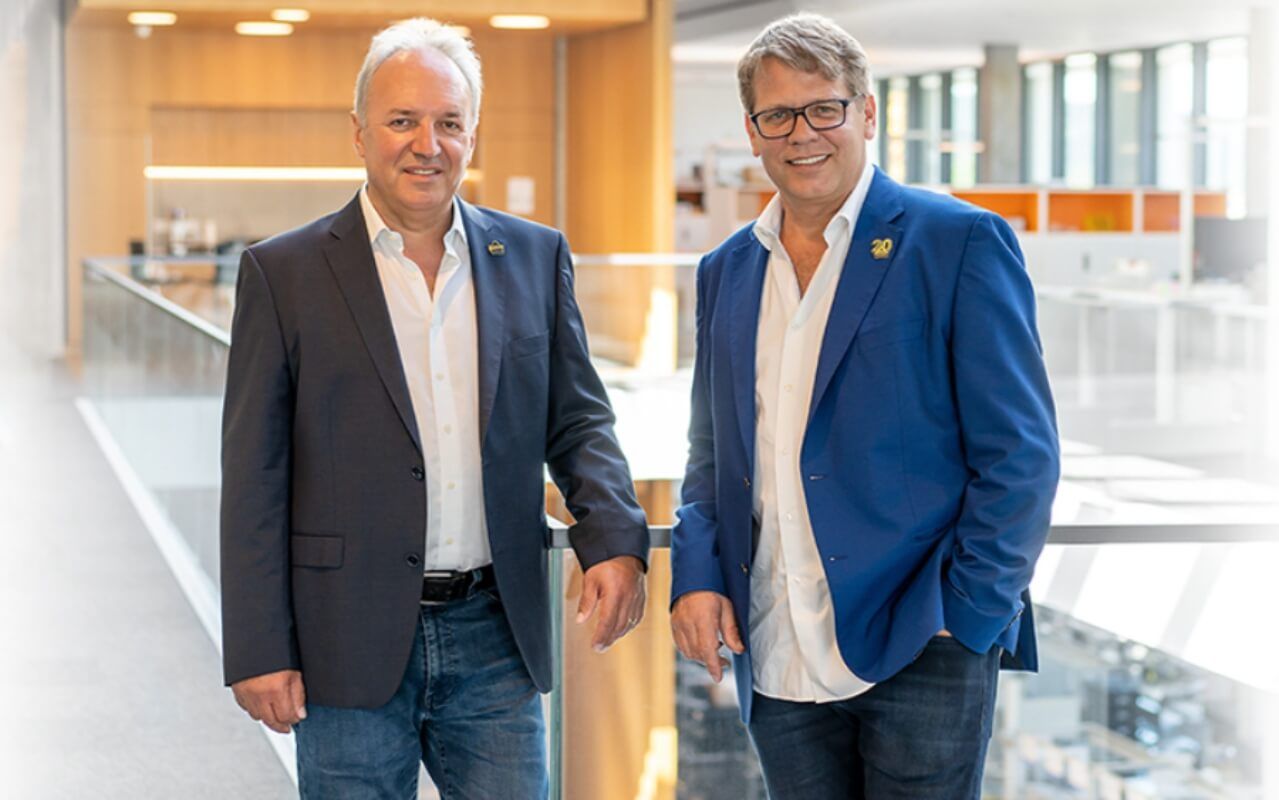