As long as cannabis is federally illegal in the U.S., there will be little in the way of formal protections for financial institutions that choose to work with operators in the industry.

But that doesn’t appear to be stopping every institution.

According to statistics from the Financial Crimes Enforcement Network (FinCEN), 684 financial institutions were actively involved with cannabis-related businesses (CRBs) as of Dec. 31, 2020.

Those estimates are based on suspicious activity report (SAR) filings, which banks are required to file for a variety of reasons, including suspected involvement in federally illegal activity.

As a result, some of these SARs might have been generated on genuine suspicious activity rather than on a transaction with a known cannabis customer.

While more banking institutions are offering services to CRBs than ever before, CRBs often still struggle to:

The gap between the need for banking and the financial service providers’ sparse and expensive offerings to the sector have created an opportunity for third-party firms to intervene and provide a compliance structure that will satisfy the needs of the financial institutions.

After the completion of due diligence, they connect the CRBs with financial institutions that are willing to do business with CRBs and provide checking/savings accounts, check-writing capability and merchant processor accounts.

One such firm, Safe Harbor Private Banking, started as a project implemented by the CEO of Partners Credit Union in Denver, who set out to design a cannabis banking program.

The program has since expanded into other states that have legalized cannabis. Other operators include Dama Financial and Naturepay.

While these services offer hope for many CRBs, the downside is that the costs of compliance are still high, pricing some small operators out of the market.

Is digital currency an answer?

Another option might be digital currency, or cryptocurrency, a medium of exchange that utilizes a decentralized ledger to record transactions, otherwise known as a blockchain.

Blockchain technology offers CRBs a transparent and immutable audit trail for business and financial transactions. Several cannabis-specific cryptocurrencies have sprung up in the past several years, including PotCoin, CannabisCoin and DopeCoin.

The tokens are redeemable for U.S. dollars at a stable rate of 1:1, and CRBs do not need a bank account to participate in the Alta program.

Nevada Assembly Bill 466 requires the state create a pilot program to design a “closed loop” system such as Venmo in an effort to reduce cash transactions in the cannabis sector.

Like Alta, Nevada’s proposed system will convert cash to tokens that can then be transacted between system participants.

While both proposals are promising for Arizona and Nevada CRBs, the timeline as to when, or if, these offerings will come online is unknown.

Action on cannabis reform at the federal level might render these options moot.

Hexo closes successful capital raise, so why is its stock falling?

Each unit included one common share and one-half share of warrants with a $3.45 exercise price (17% premium) and five-year life.

Viridian Capital Advisors values the warrants at approximately 31 cents per unit, producing a net share price of $2.64, a 23.25% discount to the preannouncement price.

Then, on Aug. 30, Hexo shareholders overwhelmingly approved the Redecan acquisition in which Hexo will pay $400 million in cash and issue 69.7 million shares for the cannabis producer.

The cash payment will be funded by combining last week’s equity issue and the proceeds of a previously sold $360 million senior convertible notes issue.

Since the announcement of the equity transaction, Hexo’s stock has fallen about 30%.

As shown in the graph below, Hexo is down more than 60% since the Redecan deal was announced May 28, significantly worse than the 20% decline of the index of large Canadian licensed producers (which includes Aurora Cannabis, Canopy Growth, Cronos Group, Organigram, Sundial, Tilray and Village Farms International). 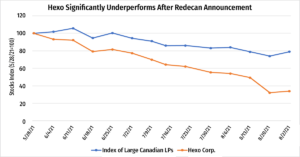 Why is Hexo down so much?

The converts from the $360 million note mature in two years, and those will either convert at a relatively low price of $3.75 per share or need to be refinanced with a more dilutive equity issuance – if the market will buy Hexo stock at that point.

Hexo has an unbroken 15-quarter streak of negative cash flow from operations, and, unlike other cannabis firms, Hexo has no sugar daddy to keep it afloat.

The Viridian Credit Tracker model uses 11 financial and market variables to measure liquidity, leverage, profitability and size. The model synthesizes these factors to arrive at an overall credit ranking within a peer group.

Viridian now ranks Hexo as having the worst credit quality of all Canadian licensed producers with more than a $200 million market cap, narrowly edging out Aurora for the bottom position.