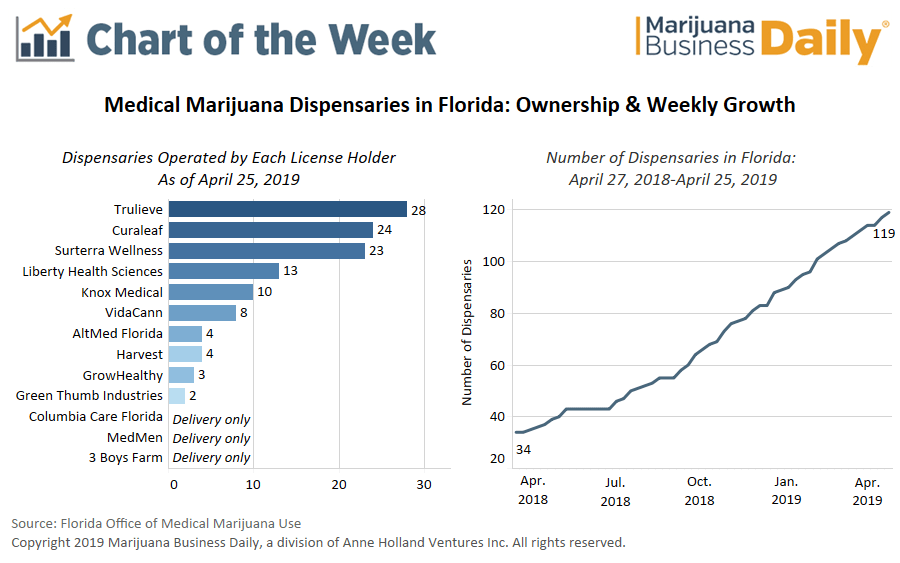 Florida’s medical marijuana market is booming, with an average of nearly two dispensaries opening each week across the state.

The number of enrolled patients recently zipped past the 200,000 mark with more than 10,000 new patients signing up each week.

ADVERTISEMENT
But despite numbers that make the Sunshine State among the fastest-growing MMJ markets in the country, Florida currently reflects an oligopoly rather than a highly competitive market: As of April 25, five licensed businesses operated 98 dispensaries, or 82% of the state’s 119 dispensaries.

The state currently has 14 license holders. The remaining nine have stuck to delivery and/or maintained modest dispensary footprints – or aren’t operational.

The landscape is poised for change, though: State regulators have approved licenses for eight more firms. The increase stems from a legal settlement regulators reached with the companies that failed to get a permit in the initial 2015 licensing round.

The torrid market also will sizzle even more from new products on the shelves later this year as a result of these developments:

For the time being, the five dominant companies have been busy leading the way by opening new dispensaries across Florida’s vast expanse.

The pace has accelerated so far in 2019, with 31 dispensaries opening in the first 16 weeks of the year alone, or practically two dispensaries a week.

The five dominant players are (current number of dispensaries, % of total dispensaries in state):

Regulators have been under fire over the state’s licensing process dating to 2015, when multiple applicants were denied licenses despite coming within one point of the score of winning licensees.

This led to years of legal disputes between applicants and state regulators, as well as lawsuits claiming the state’s dispensary cap was unconstitutional.

One question is to what extent these late-to-the-game licensees will be able to compete against the dominant five and potentially change the dynamics of the Florida market?

Sally Peebles, a cannabis attorney with Vicente Sederberg’s Florida office, told Marijuana Business Daily that while the existing license holders have enjoyed a head start on prime real-estate locations, she believes the newer licensees will have ample opportunities in the long run.

For example, despite a fast patient ramp-up, she noted that Florida’s medical marijuana market has just a quarter of the dispensaries of Colorado’s MMJ market but roughly four times the population.

“This shows that the Florida market still has a lot of growth to do, and there is plenty of room for new industry players to enter,” she wrote in an email.

There’s another competitive factor at play.

Trulieve – the market leader with 28 dispensaries – can now open up to 49 stores, thanks to winning a lawsuit earlier this year. That’s 14 above the current limit of 35, which is tied to patient counts.

Peebles, who will provide insights on the Florida market at MjBizConNEXT in June, sees that as a potentially positive development for the entire industry.

She noted that other license holders can pursue their own legal challenge to the dispensary cap – pointing to the Trulieve case as precedent.