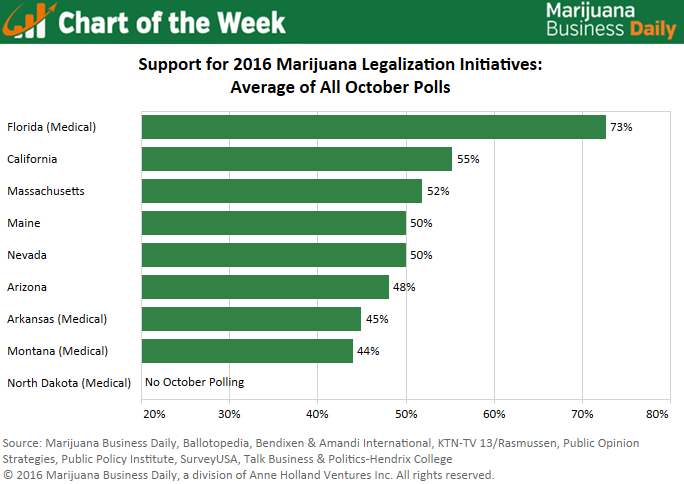 Will Election Day lead to champagne showers and celebratory toasts in the U.S. marijuana industry or widespread heartache and disappointment?

Judging by the latest round of polling data, there’s reason to be optimistic – though cannabis executives might want to keep the bubbly on ice for now.

According to an average of all October polling data in states where marijuana legalization initiatives are on the ballot, the odds of success for many measures is to a large extent essentially a coin flip. Support in most states is just above or below the threshold needed to pass and well within the margin of error, so Tuesday could be a nail-biter.

Even though a majority of Americans support the legalization of marijuana, these findings illustrate just how contentious the issue remains at the state level.

ADVERTISEMENT
Florida appears to have the best chance of success. Despite the more than $3 million raised by state ballot committees in opposition to a medical marijuana legalization measure on the ballot, support for the proposal is approaching 75% – well above the 60% needed to pass.

A 2014 medical marijuana legalization amendment fell just short of the 60% threshold, but October polling for this year’s amendment is well above where polling was during the same month two years ago.

Nearly $20 million has been raised by ballot committees supporting marijuana legalization in California – more than any other state voting on marijuana legalization this year – and support for the initiative is at 55%. But polls have shown support ranging from 51% on the low end to 60% on the high end, so the race could be closer than many had initially expected.

An average of two October polls in Massachusetts shows support for recreational legalization above the 50% mark, though one shows the initiative passing while the other shows it failing by a slim margin.

The Republican governor of Massachusetts and the Democratic mayor of Boston have both come out against legalization, and a recent $850,000 donation by the Boston Archdiocese of the Catholic Church ensures the measure will be hotly contested come election night.

Only one October poll regarding Maine’s recreational marijuana legalization ballot initiative has been released, and it indicates voters are split on the measure, despite the massive funding disparity in favor of legalization supporters.

Similar to the situation in Massachusetts, one poll puts support at 47% while the other has it at 53%.

Support for Arizona’s recreational marijuana legalization ballot initiative comes in below 50% using an average of three October polls, though two polls show the measure passing with approximately 50% of the vote while the other shows the measure failing with 44% of the vote.

One of the largest medical marijuana markets in the nation, Arizona has seen a number of business, including high-profile names like U-Haul, come out against marijuana legalization and make donations to groups fighting it.

In Arkansas – where the state Supreme Court disqualified one of two medical cannabis legalization ballot initiatives – support for legalization is underwater. While it was once thought that two competing initiatives could split support and cause both to fail, it’s now plausible the single remaining initiative may be unsuccessful on its own.

An October poll in Montana, the only one out this year in the state, shows support for an initiative to legalize MMJ dispensaries and commercial cultivation operations is at 44%.