If not Congress, what about the courts?

A not-too-distant future in which marijuana companies can ship products across state lines – if not “legally,” at least without interference from federal or state authorities – is possible if a recently filed lawsuit challenging Oregon state law is successful, legal analysts told MJBizDaily.

Such an outcome might require legal challenges in other states, however.

Also, it would likely require finding other states – and businesses there – willing to accept out-of-state marijuana.

In this way, legalizing interstate commerce via the courts, ahead of outright federal legalization, is a long shot, a sort of Rube Goldberg machine of interdependent hypotheticals that all must fall into place before a single pound is shipped.

But best of all for a marijuana industry tired of delayed federal reform and struggling with tumbling wholesale prices, neither Congress nor the president would have to do anything.

‘No differently than any other product’

The suit seeks to overturn a section of Oregon law that prohibits state-licensed operators from shipping marijuana across state lines, arguing that such a prohibition is unconstitutional.

Like some other legacy states in the West, Oregon appears amenable to the idea of supplying other states with sun-grown cannabis.

In 2019, Oregon’s governor signed into law legislation that would lift that prohibition if there are significant changes to federal law, including the legalization of interstate commerce.

But Jefferson Packing House’s lawsuit seeks to get ahead of that and eliminate the restriction on exports – even if there is no action at the federal level.

In that case, U.S. District Judge Nancy Torresen of the 1st Circuit Court of Appeals ruled that Maine’s law was a violation of the U.S. Constitution’s dormant commerce clause.

The law, she wrote, “explicitly discriminates against residents of other states and Maine cannot show a legitimate local purpose for the requirement.”

In a Nov. 14 letter to Gov. Brown and other state officials, lawyers for Jefferson Packing House argued that under the dormant commerce clause, states “are prohibited from enacting laws regulating interstate commerce, because it is the exclusive purview of Congress.”

Citing the Maine case, the Jefferson Packing House lawyers wrote in their letter that “we believe it is likely that a federal court will treat marijuana like hazelnuts and invalidate state laws prohibiting the export of marijuana notwithstanding the fact that it is illegal under federal law.”

“Federal courts are signaling that they’re not going to treat cannabis differently than any other product,” one of the attorneys, Andrew DeWeese, told MJBizDaily in an interview.

‘See what the feds do’

However, even if a judge agrees, and if the ruling isn’t appealed – or, if it is, if the U.S. 9th Circuit Court of Appeals, or, potentially, the U.S. Supreme Court, upholds the ruling – a few more hurdles would need to be cleared.

And that could take time.

For starters, regulators in both Oregon and another state would have to create a “regulatory pathway” for licensed companies to start shipping marijuana.

If they did not do so willingly, that potential Supreme Court ruling could strike down prohibitions, though it’s less clear if such a decision would compel other states to write the necessary regulations.

It’s also unclear how welcoming existing marijuana businesses in the target state would be to new competition.

At that point, “someone with real guts will need to say, ‘OK, I’m sending 100 pounds of weed to another state,’” DeWeese said. “And then we’ll have to see what the feds do.”

Both the 1st Circuit as well as lower federal courts, in response to a Michigan man’s challenge of residency requirements in equity programs, have agreed that the dormant commerce clause applies to cannabis.

As others, including Supreme Court Justice Clarence Thomas, have pointed out, interstate trade in cannabis currently exists – although it is entirely illegal – and which Congress currently “regulates” via the Controlled Substances Act.

If the Jefferson Packing House challenge were to be greeted by a similar ruling at the 9th Circuit – which oversees much of the West Coast – and then again later at the Supreme Court, where Thomas wrote in a 2021 opinion that “prohibition on intrastate use or cultivation of marijuana may no longer be necessary or proper to support the Federal Government’s piecemeal approach” toward cannabis, other states’ bans on exports could later be overturned.

Skeptics who point out that the U.S. Department of Justice might take exception to a few states testing the federal government’s appetite to crack down on marijuana point out that the existing $33 billion MJ industry also violates U.S. law.

Shipping more marijuana across state lines, only this time with state licenses, and entering the transactions into track-and-trace systems is simply another violation of another federal statute, that, until now, has been seen as an ultimately arbitrary red line.

In any event, as attorney DeWeese stated, with outdoor craft farmers known for producing high-quality product suffering through an extended period of plummeting prices, “we need this in Oregon.”

“Our industry in Oregon needs help,” he added, “and this is an incremental step that can be taken that will hopefully convince some other people to take action, too.”

DeWeese’s strategy follows an argument that prominent legal scholars have been making for years.

One of them, Vanderbilt University law professor Robert Mikos, believes “they have a very good case.”

“There’s no question about it: Oregon has said that the companies licensed in Oregon can’t ship product out of state. There’s no ambiguity there.”

“The only reason we have to doubt any of this at all, whether the dormant commerce clause applies to this market, is because it’s marijuana,” he said, noting that four federal courts have nonetheless ruled that the commerce clause does apply to cannabis.

“Once you accept that, the outcome is obvious,” he added. “The company is going to win, and this ban on the export of cannabis is going to get struck down.”

At the same time, he warned, the status quo will not change quickly.

More lawsuits, such as challenges forcing other states to open their markets to out-of-state cannabis, might follow.

And even if the markets are open to out-of-state-product, that product would need to be competitive.

That cannabis would also be subject to whatever regulations that state would impose. It could be that packaging and labeling requirements would make importing marijuana impractical.

Importantly, Mikos does not expect federal interference from the Justice Department.

“There’s no appetite in the federal government to prosecute these kinds of cases,” he said.

“It’ll be expensive and time-consuming, so things aren’t going to change overnight. Even if we got a ruling tomorrow from the district court saying Oregon’s ban is unconstitutional, it’ll take some time to work out.”

“It would clearly be a huge benefit to almost all Oregon cannabis business,” said Getlin, who is also the founder and president of the Oregon Industry Progress Association.

Getlin and his colleagues have been focused on the plight of cultivators ever since the market for outdoor flower in the state crashed under the weight of epic oversupply, as Oregon’s relatively low costs and permissive rules encouraged cultivators to grow more than they could sell.

Were barriers to shipping to fall, “I don’t think you’ll have any trouble finding someone” willing to test the waters, he said.

“Thousands of people have been shipping weed to the East Coast for 50 years.”

However, partly because of the interest, Getlin is more circumspect and injects a note of caution.

“I’m not sure that it’s necessarily the one solution that a lot of people think it might be,” he said.

And oversupply is not just an Oregon problem.

“We’re seeing a lot of the same pricing realities play out in markets across the country as they mature,” Getlin said.

“While I think it’s a critical step – and one that Oregon businesses have been hoping and preparing for for the better part of a decade now – I think it’s one more step in the right direction and not a solution for all our woes.”

And lawsuits that end up at the Supreme Court are measured in years – time that not every struggling business in the cannabis industry has to spare.

“The trouble is, there’s a lot of good people with good businesses who are going to fail while the government moves at its usual slow pace.” 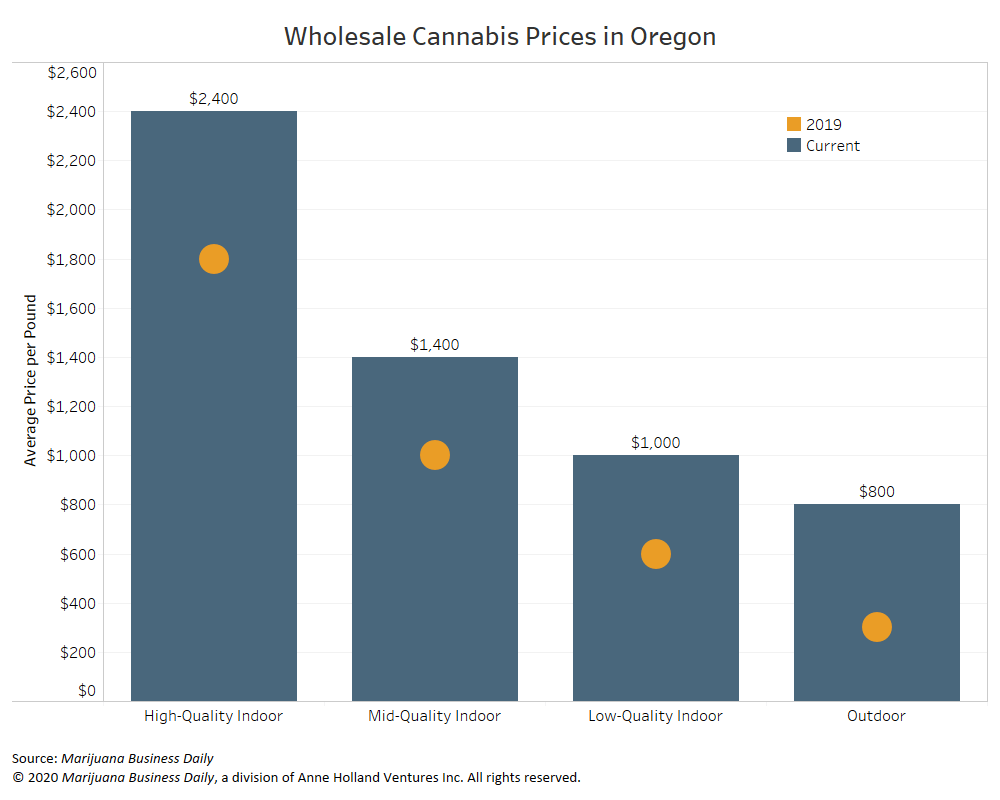