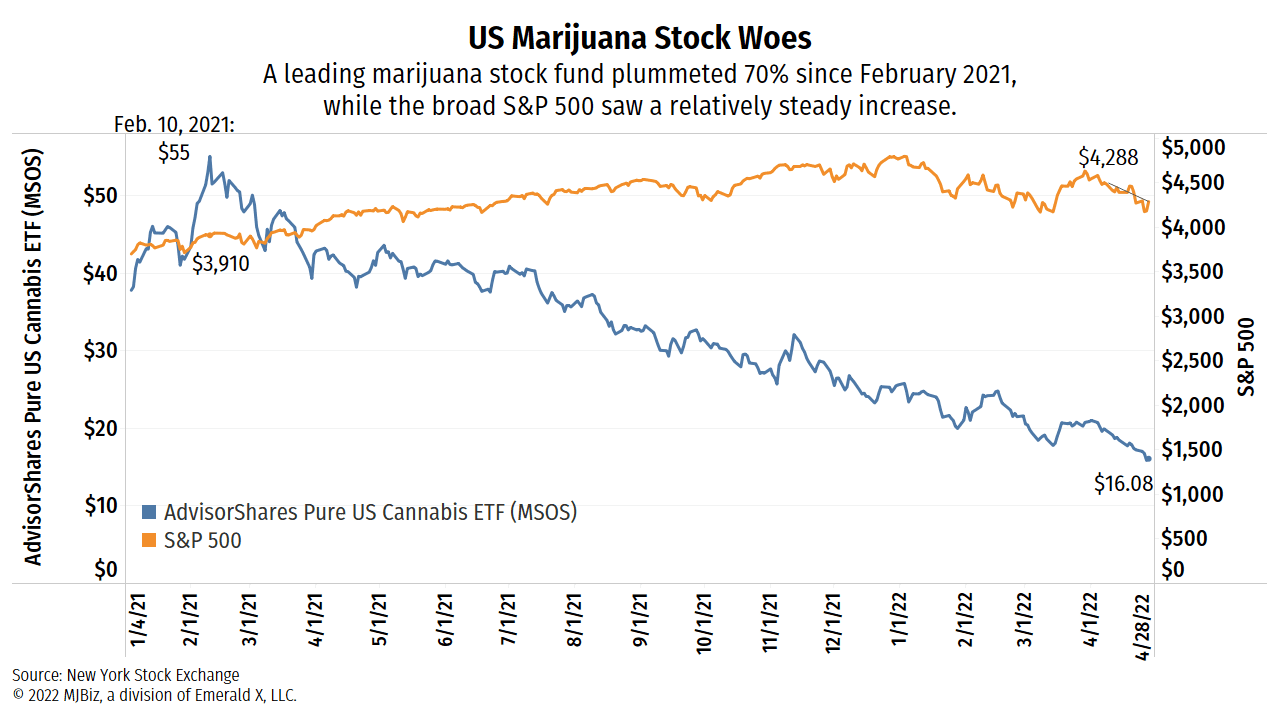 Publicly traded cannabis companies have seen their stock prices plunge by as much as 70% since early February 2021, largely reflecting the lack of progress in passing some form of legislation to reform the nation’s marijuana laws.

A variety of economic factors are exacerbating the negative investor sentiment, including:

“The backdrop of challenging macro headwinds and the lack of movement at the federal level have all given investors a reason to pause,” said Matt Karnes, founder of the cannabis financial consultancy GreenWave Advisors in New York.

“And with so much uncertainty in the world, if you’re going to point your money (in a certain direction), would it be in something illegal?” he asked, referring to the federal marijuana ban.

AdvisorShares Pure US Cannabis ETF – an exchange-traded fund that includes multistate operators and trades as MSOS on the NYSE Arca exchange – plunged from $55 a share in early 2021 amid the euphoria of a new Democratic-controlled administration and Congress, to around $16 as of last Thursday.

By contrast, the broad Standard & Poor’s 500 increased modestly during that time.

Karnes and other experts detailed a number of factors that have combined to make this a challenging time for the U.S. marijuana industry:

Jordan characterized the current situation as a “hiatus” in industry growth due to a “perfect storm” that includes a post-COVID downturn in sales, rising inflation and weaker sales given normal seasonal factors, according to Pablo Zuanic, an equity analyst with New York-based Cantor Fitzgerald.

Federal stimulus checks boosted consumers’ purchasing power in 2020 and the first half of 2021.

In terms of seasonality, first-quarter sales are historically weaker than fourth-quarter sales, which typically get a lift from holiday-related spending.

But, according to Zuanic, Jordan told the group he believes the industry is turning the corner with 4/20 promotions and the recent launch of recreational marijuana sales in New Jersey.

Karnes isn’t so sure.

“One week of sales isn’t going to do anything for anybody,” Karnes said of New Jersey, which launched on April 21.

“We’ll have to see how the quarter shakes out.”

New Jersey, Karnes said, “may be overshadowed by other markets that have revenue deceleration.”

Total marijuana sales in Colorado, for example, have been on a downward path since July 2021.

But there are potential signs of improvement: Illinois adult-use sales declined in January and February, but rebounded in March.

The economic challenges are illustrated by tighter capital.

Cannabis capital raises are down 67% year-to-date through April 22, according to New York-based Viridian Capital Advisors.

Viridian reported that the cultivation and retail sectors have been especially hard hit, with a “virtual absence” of equity raises.

U.S. debt raises for cannabis companies were at an all-time high, but the largest three deals accounted for more than 60% of the total volume, according to Viridian.

Viridian reported that the primary reason for the decline in marijuana stock prices is the “dwindling hope for any significant federal legalization in 2022.”

Another key reason is the “poor” earnings performance in the first quarter of this year.

A clearer picture of the quarter will emerge when U.S. MSOs announce their results in the coming weeks. But five of the top seven U.S. MSOs posted bottom-line losses for all of 2021.

Viridian noted that some investors “are clinging to the hope” that Democrats will be able to get cannabis banking reform passed by attaching it to a larger spending bill.

House Democrats are trying to do that now as part of a domestic spending bill known as the America COMPETES Act.  The Senate’s version didn’t include cannabis banking reform.

But Viridian is skeptical that effort will succeed given that progressive Democrats don’t want such reform without a social equity component, while Republicans would resist such a provision.

Another point, according to a recent Viridian report: “We believe (President Joe) Biden is against diverting his party’s focus to cannabis when the bulk of his domestic program still lies on the drafting table.”

Zuanic of Cantor Fitzgerald is more optimistic, noting that he believes the so-called SAFE Banking Act has increasing support as “good social policy” because of its goal to eliminate the safety risks of an industry that handles mostly cash transactions.

Zuanic puts the likelihood of passage of cannabis banking reform this year at more than 50%.

Key cannabis lawmakers point to a rash of violent robberies in Washington state in recent weeks and months.

The passage of cannabis banking reform could be enough to move the needle with marijuana stocks, Karnes said.

This much is sure, Karnes said.

“Something has to change (in terms of reform) for stocks to move.”

Jeff Smith can be reached at jeff.smith@mjbizdaily.com