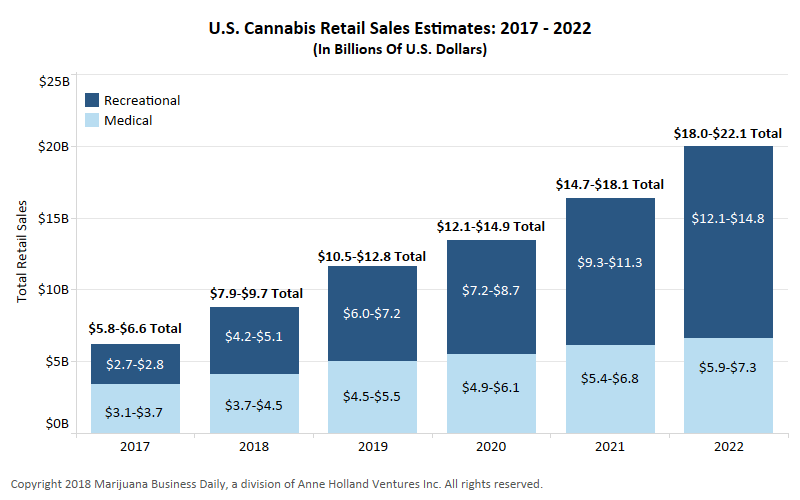 Retail sales of medical and recreational cannabis in the United States are expected to hit $8 billion-$10 billion this year – a nearly 50% increase from 2017 – and rise as high as $22 billion by 2022.

That’s according to exclusive projections from the 2018 edition of the Marijuana Business Factbook released Wednesday at the start of MJBizConNEXT in New Orleans.

ADVERTISEMENT
The anticipated explosive industry growth is a backdrop for MJBizConNEXT, which is hosted by Marijuana Business Daily. The industry conference is expected to draw 3,000 marijuana professionals and 280-plus exhibitors from around the globe.

The Factbook’s projections come as the political and legal landscape for marijuana businesses is in flux, underscoring how quickly the cannabis industry can experience dramatic change.

Politicians at the top of both the Democratic and Republican parties have spoken out in favor of federal reforms.

Marijuana sales in 2018 are expected to increase by nearly 50% over the estimated $5.8 billion-$6.6 billion the industry tallied last year, with recreational sales potentially surpassing medical sales for the first time, according to the 2018 Factbook.

Adult-use sales are projected to hit $4 billion-$5 billion this year compared with $2.7 billion in 2017.

A handful of states will have a significant impact on the industry’s overall performance in 2018:

MJBizConNEXT – which focuses on the future of the marijuana industry – will host attendees from most U.S. states and numerous international destinations. Previous conferences have drawn entrepreneurs from as far away as Australia, China and South Africa.

Speakers at the conference will address a variety of forward-looking business trends, from high-tech cultivation practices to the latest hurdles faced by California MJ companies to some of the newest and hottest markets that are getting underway, such as Pennsylvania and Ohio.

In addition, several hours of presentation will be devoted to business strategies for newly launched companies aiming to make the most of the industry.

Attendees will also get updates on potential federal reforms from a panel of experts – including one congressman – as well as which states and countries may be the next to legalize marijuana.

MJBizConNEXT had a soft opening Tuesday with Day One of the two-day Executive Summit.

The Summit is designed to give C-suite executives and senior-level leaders with a minimum of two years in the cannabis industry an opportunity to learn about and discuss mergers and acquisitions, delegation and growth strategies.

Below are some highlights from Tuesday’s Summit: