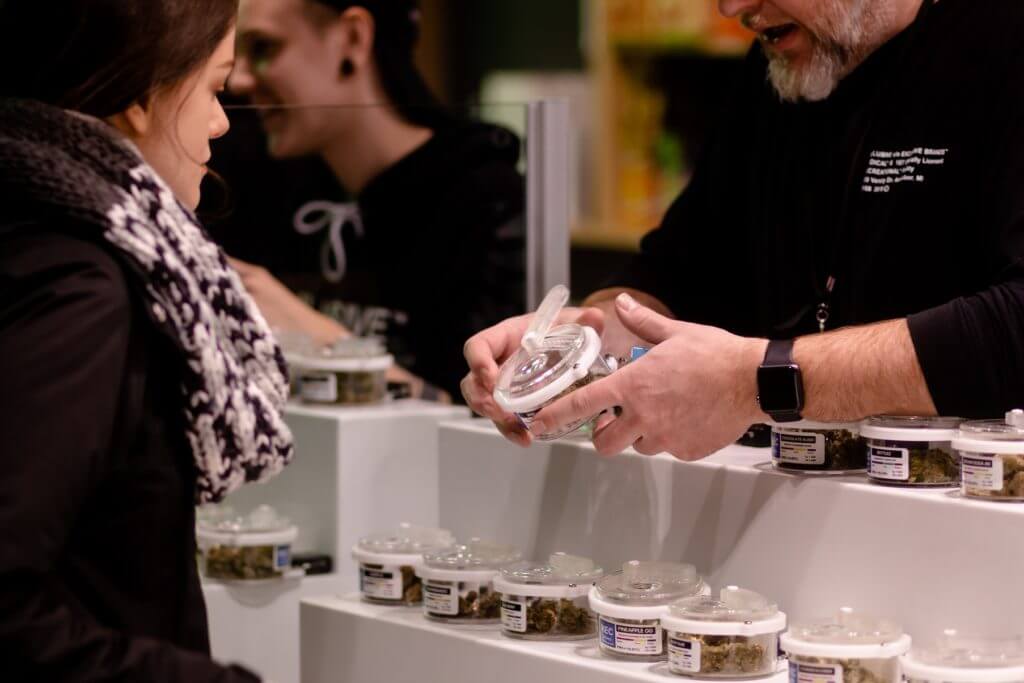 (This is the first installment of a two-part series looking at Michigan’s new recreational marijuana market. Part 2 is available here.)

Michigan’s 7-month-old recreational marijuana market is growing quickly, with sales up from nearly $7 million in the first month of sales last December to more than $39 million in May.

But Michigan’s recreational market has challenges to overcome as it grows, according to local industry officials.

Those challenges include a mismatch between supply and demand that could take years to clear up, as well as limited municipal opt-ins for adult-use marijuana businesses exacerbated by the COVID-19 pandemic.

“You might see 20 or 25 strains on the medical side, and then go over to the rec side and there might only be four strains of cannabis,” Pybus said.

“Gummies, distillate, all of it.”

The supply shortage is also reflected in prices: The average retail price for an ounce of flower in the adult-use market was nearly $410 in May, according to the latest monthly report from Michigan’s Marijuana Regulatory Agency (MRA).

In the medical market, the average price for an ounce was about $251.

“Nobody is getting the amount of product they’re looking for, because it’s just not available.”

Robin Schneider, executive director of the Michigan Cannabis Industry Association, said the state has “more than enough room” for new producers and other businesses.

“And so, as we get more production up and running and that price per pound comes down on the wholesale price, those prices will be reflected at the retail level – which will help increase consumer confidence and get those consumers to come into the retail establishment.”

The recreational product shortage was exacerbated by the sudden phase-out of caregiver supply to adult-use retailers in an April decision by the MRA.

That caused “large spikes in the wholesale pricing and, on the retail end, the retail pricing to consumers,” said Pybus of Truu Cannabis.

But the impending end of caregiver supply to the medical market could have a knock-on effect for the recreational side, said Micah Siegal, chief legal officer at PG Group, a management company that runs marijuana production and retail operations.

“That’s going to immediately take a bunch of flower out of the system,” he said.

“That could have supplied the medical side, and therefore, just by extension, that impacts the rec side, because there are processes to transfer medical over to rec.”

Pybus expects it will be years, not months, before Michigan’s recreational supply catches up to demand “because the market is growing so fast and there is such a big market here for recreational products.”

“The black market is still thriving, it’s very apparent, and the only way that we’re going to be able to put a dent in that is to get the product pricing down,” he added.

“In order to get there, we have to get the canopy space, and these facilities take a long time to build out.”

Roughly 1,400 Michigan communities opted out of allowing licensed marijuana establishments at the outset of adult-use legalization, creating an uneven business landscape across the state.

Local governments in Michigan had a November 2019 deadline to opt out of allowing cannabis businesses in their communities or be automatically opted in.

“There was a wave of cities at the end of 2019. … Cities just said, ‘OK, well, we haven’t had a chance yet to look at this, think it through, see how bringing cannabis businesses will impact our zoning and code enforcement, so we’re just going to go ahead and opt out and study it some more,'” he said.

The latest figures from Michigan’s Marijuana Regulatory Agency show 1,419 communities are currently opted out of allowing licensed recreational marijuana businesses, compared with the 60 that have opted in.

The large number of municipalities that are currently opted out of the adult-use market could be “a little bit misleading” to observers, said Andrew Brisbo, the MRA’s executive director.

“It makes it sound as though there’s almost a prohibitionist mentality in the state,” he said.

Like Siegal, Brisbo believes some municipalities delayed opting in at the outset so they could take their time assessing the state program and consider their own approaches.

“I think municipalities are starting to come on board,” he said.

Schneider of the Michigan Cannabis Industry Association said local government opt-ins have been slowed by the COVID-19 pandemic.

“But I am starting to see that uptick again,” Schneider said, pointing to a recent opt-in decision by Kalamazoo.

The elephant in the room remains Detroit, the state’s biggest city, which has delayed opting in to recreational sales while the City Council studies social equity options.

“The medical market in Detroit is huge,” Siegal added. “Some of the inner-ring suburbs have gone rec, and those shops are seeing incredible numbers.”

Although new municipal opt-ins will undoubtedly expand Michigan’s adult-use cannabis market, Exclusive Brands’ Hishmeh said he has some reservations because of the supply situation.

“I am looking forward to other municipalities opting in,” he said.

“However, right now they would be opting in and it would be a disaster because there’s no product.”