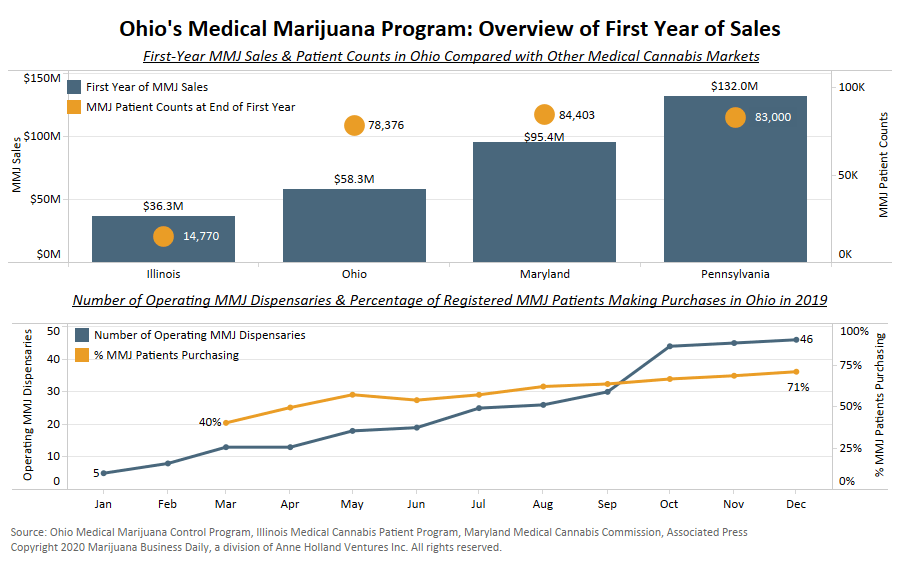 Ohio’s medical marijuana industry pulled in nearly $60 million in its first year of sales, with increased access to dispensaries and falling prices making up for the market’s sluggish start.

Roughly 50% of the state’s total medical marijuana sales came in the last quarter of 2019, but it wasn’t enough to drive sales to the heights of other, similar medical cannabis markets that launched in the past couple of years such as Maryland and Pennsylvania.

While access to medical marijuana in Ohio was extremely limited at launch – the program kicked off with just five dispensaries that sold only dried cannabis flower – dispensaries continued to open at a steady clip over the course of the year.

Currently, 46 dispensaries are operating throughout the state.

Currently, 0.7% of Ohio’s population is on the state’s medical marijuana registry, in line with Pennsylvania, which had approximately 0.6% of its population registered at the end of its first year of sales.

Limited supply, driven by a lack of licensed cultivators and processors, kept prices in Ohio high throughout much of 2019. A June 2019 survey of medical marijuana patients in Ohio identified high costs as the primary reason keeping patients from purchasing MMJ from a licensed dispensary.

Prices, however, appear to be falling. Using data from the state that details total sales, total number of infused product units sold and total pounds of flower sold, Marijuana Business Daily estimates the current average price for an ounce of medical cannabis in Ohio is $260, down from roughly $450 per ounce in April 2019.

As more MMJ processors received licenses in Ohio, sales of infused products – which include offerings such as edibles, concentrates and tinctures – began to climb.

Looking forward, access will need to continue to improve if Ohio’s medical marijuana market is to reach its full potential.

The law currently allows for a maximum of 60 dispensaries in the state. While Ohio isn’t as restrictive as some MMJ markets, such as Minnesota or Delaware, on a per capita basis it’s a relatively low number of dispensaries.

Once the state hits its cap of 60 dispensaries, many medical marijuana patients will still need to drive substantial distances to access a dispensary.

Chart: Ohio medical marijuana sales start strong, but not all patients are buying