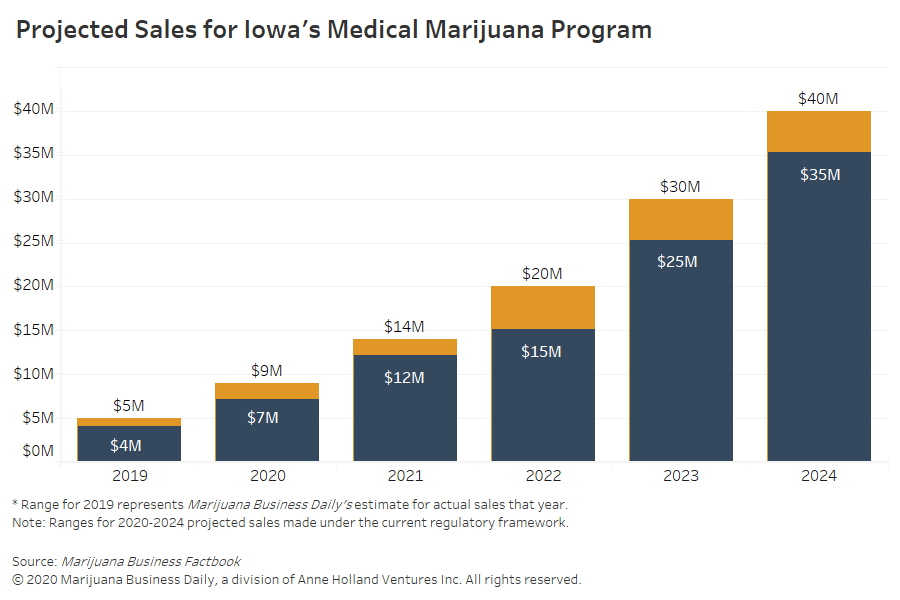 While most marijuana markets across the country have experienced robust demand during the coronavirus pandemic, Iowa’s MMJ sales have been weak.

ADVERTISEMENT
Patients have struggled to renew and register their MMJ cards because of complications related to the pandemic, and two of five dispensaries have shuttered their doors.

Sales are on pace to reach only $3.2 million this year, according to state data through July, compared with a recent Marijuana Business Factbook projection of $7 million-$9 million.

Iowa, which launched its program in November 2018, has a law that’s more business-friendly than some low-THC programs but is still an example of how not to structure an MMJ program, Karen O’Keefe, director of state policies for the Marijuana Policy Project (MPP), wrote in an email to Marijuana Business Daily.

“The overall lesson is that highly restrictive programs are less viable, and tend to result in losses,” O’Keefe wrote.

Aaron Boshart, director of operations for Iowa Cannabis, which has a dispensary in Waterloo, agreed it’s tough sledding in the market.

The Iowa market offers several lessons, according to MPP’s O’Keefe:

Boshart said he and Iowa Cannabis CEO Tate Kapple knew the market would be difficult to make a profit in, based on its regulatory structure and the conservative attitudes in the state.

But “this is our home state,” Boshart said. “We’re committed to the Iowa market long term and prepared to forgo profitability to provide access to patients of Iowa. … We feel responsible that this program succeeds at whatever the cost.”

In addition to owning Iowa Cannabis, Kapple also owns three recreational marijuana stores called Cannabis & Glass in the Spokane, Washington, area, providing him some financial cushion. He also has an adult-use store under construction in Oregon.

The state’s only other current operator is Des Moines-based MedPharm Iowa, which now is the sole cultivator/processor and also operates dispensaries in Sioux City and Windsor Heights under the MedPharm Iowa brand.

“That’s a huge problem, there’s no price competition,” Boshart said of having only one product manufacturer in the state. “We’re extremely frustrated with the pricing structures we’ve seen for our patients.”

That’s two to three times more expensive than the cost per milligram of similar products in Washington state, Boshart noted.

But after Acreage pulled out in June, MedPharm Iowa General Manager Lucas Nelson told The Gazette in Cedar Rapids that the exit was a “big blow” to the program.

“We can’t quite seem to get our footing in the program,” Nelson said.

The coronavirus pandemic dealt a blow to Iowa’s program as well.

Dispensary visits and sales dropped off between April and June, according to the health department’s July update.

But the bigger issue appeared to be a decline in active patient cardholders and the closure of two dispensaries.

Patient renewals and new patient registrations fell sharply between April and June as residents struggled to see their doctors or visit state drivers’ license stations to pick up the cards.

Registrations and renewals picked up in July, as the Iowa health department took over the card-issuing process.

In June, Gov. Kim Reynolds signed legislation into law that replaced the 3% THC cap with a 4.5-gram THC cap per 90 days.

The law also removed THC limits for terminally ill patients and provided discretion to doctors to recommend additional THC to their patients.

Still, industry officials expect only a moderate boost from the THC formula change.

“I believe it will help marginally,” Boshart said.

“It’s a more scientific way to approach things,” he said, adding Iowa Cannabis hopes to see an expansion of products as a result.

In the meantime, Iowa regulators have moved to fill the abandoned licenses.

Applications were taken for the two vacant dispensary licenses, with Sept. 7 as the scheduled date to award the permits.

For example, the company’s Davenport dispensary was near the Illinois border, so customers could easily cross over and buy a range of less expensive products, including flower, in the neighboring state – even though it’s illegal to return to Iowa with a purchase.

Boshart said Iowa Cannabis applied for licenses in the Iowa City and Cedar Rapids areas, which he characterized as the state’s two largest underserved areas.

It’s unclear how many applications Iowa received for the two dispensary vacancies, but 18 letters of intent were submitted before the application deadline.

Iowa MMJ regulators haven’t yet put out a request for applications for the vacant cultivator/processor license but say they will do so.

Boshart said Acreage edged out Iowa Cannabis for that license in the previous round. But he indicated Iowa Cannabis hasn’t decided whether it will apply because of the challenge of making a profit.

He said Iowa Cannabis welcomes additional participation in the market but noted that entrants need to be prepared for low margins and a difficult road to profitability.

If a business enters the market thinking limited competition will enable it to capitalize on or even monopolize certain areas, Boshart said, “that’s a flawed strategy at this point.”