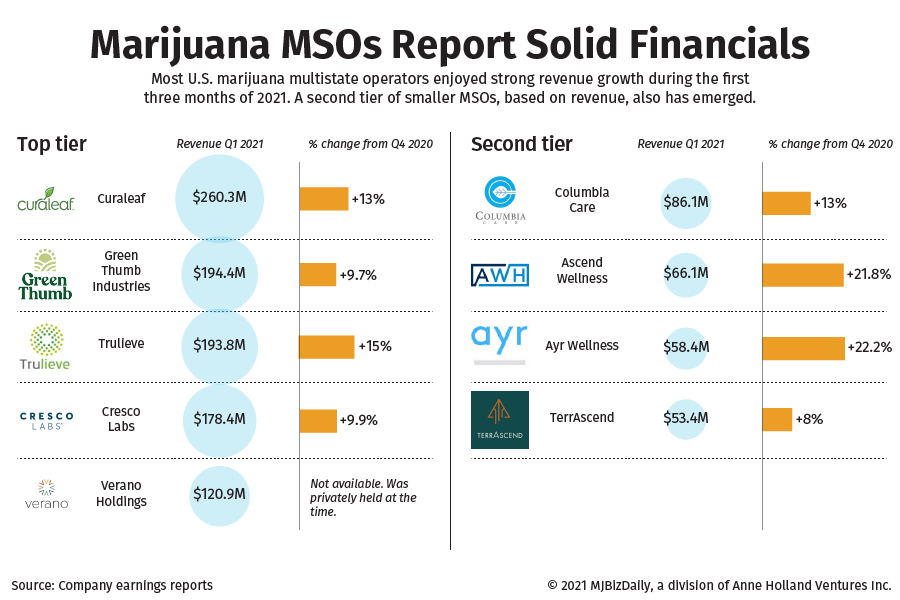 Many reported double-digit revenue growth in the first quarter of 2021 versus the fourth quarter of 2020 and, in several cases, staggering year-over-year growth.

But not all MSOs are doing well.

Some, such as Los Angeles-based MedMen Enterprises, still struggle with high debt loads and low cash flow as a result of overspending, overly ambitious expansion and/or poor execution.

A distinctive second tier of up-and-comer MSOs also seems fully established – companies that are smaller in size but are on firm financial footing and seen as potential acquirers of other marijuana businesses. That group includes Ayr Wellness and TerrAscend, both with offices in New York and Toronto.

“The biggest takeaway (from the quarter) is that U.S. cannabis is continuing to prove the thesis that it’s one of the best and fastest-growing industries in the U.S.,” said Emily Paxhia, a managing director of Poseidon Investment Management, a San Francisco-based cannabis investment firm.

At the same time, established MSOs and up-and-comers might be entering a new round of merger and acquisition activity, highlighted by Florida-based Trulieve’s recent agreement to acquire Arizona-based Harvest Health & Recreation in a $2.1 billion all-stock deal.

When completed, the deal will catapult Trulieve toward Curaleaf at the top of the MSO first tier as defined by revenue (see graphic above). Harvest, not shown in the graphic, straddled the first and second tier with $88.1 million in revenue in its first quarter of 2021.

The banking company also no longer holds those securities as a custodian on behalf of big cannabis investors.

“(When) Credit Suisse pulled custodian (services) on cannabis stocks, a number of large investors in the space lost their ability to custodian the stocks,” Abner Kurtin, CEO of Massachusetts-based Ascend Wellness Holdings, told Reuters at the time. “That led to a significant selloff.”

According to Paxhia, the marijuana industry is well into a new cycle marked by increasing prudence. This includes:

“All are steps moving toward a lasting industry,” Paxhia said. “That’s really the long view of how you build a cannabis company.”

While the pattern is typical of new industries that have experienced the ebb and flow of capital, the marijuana industry has the added challenge of a fragmented infrastructure illustrated by the patchwork of state-legal markets and regulations, Paxhia said.

In the past several months, there has been an increase in both capital raising and M&A as multistate operators seek to strengthen and expand their footprints in high-potential markets.

Most of those M&A deals have been “tuck-in acquisitions geared to bolster positions in key states and enter new states,” New York-based Viridian Capital Advisors noted in a recent report.

But a new approach emerged in April when Trulieve struck its blockbuster deal to buy Harvest.

Viridian predicted that the Trulieve-Harvest deal, “given the arms race nature of this industry,” could set off another wave of large acquisitions in the near term.

Viridian identified Ayr Wellness, Florida-based Jushi Holdings, Nevada-headquartered Planet 13 Holdings of Nevada and TerrAscend as “most likely to make significant acquisitions in the near term.”

“I’m very interested in TerrAscend,” Paxhia said. “I like the way they took a California brand (The Apothecarium) and brought it to the East Coast. To see it open in New Jersey is a total head trip.”

In a May 20 research note, analyst Andrew Partheniou cited TerrAscend’s record revenues and margins and “impressive execution” in garnering a top three retail position in Pennsylvania. He wrote that significant growth is to come in Pennsylvania and Maryland, as well as in New Jersey, which recently legalized adult-use marijuana.

Columbia Care, which leads the second tier with $86.1 million in revenue in the first quarter and is one of New York’s 10 medical cannabis operators, is another to watch, Paxhia said.

She noted the company also made bold moves to enter competitive and well-established markets such as Colorado and California.

The company also acquired California-based Project Cannabis – a deal that included four adult-use stores in Los Angeles and San Francisco and a manufacturing facility in San Diego – for $69 million in cash and stock.

Such acquisitions might seem like detractive moves, but “if you’re from the East Coast selling ice in the desert, you don’t have to be as competitive,” Paxhia said.

Massachusetts-based Curaleaf, which led all MSOs with $260.3 million in revenue in the first quarter, is another example of a company that’s expanded westward.

In its latest move, Curaleaf, which has a presence in 23 states including several western states, announced a $67 million acquisition of Colorado-based Los Sueños Farms, one of the largest cultivation operations in the U.S. with 2.9 million square feet of production.

Partheniou wrote in a research note that he viewed the company’s expansion in Colorado as strategic in several ways:

While it was a banner quarter for many MSOs, not all enjoyed record-breaking performances.

MedMen, which has been restructuring in part by shedding some operations, reported revenues of $32 million in the first three months of 2021.

That was relatively flat versus the previous quarter and down from $44.1 million during the first quarter of 2020. Its operational loss totaled $26.9 million for the quarter ended March 27.

MedMen ended the quarter with a negative shareholders equity of $222.4 million and $347.1 million in debt excluding lease liabilities.

Harvest’s first-quarter revenue of $88.8 million was up 27% from the previous quarter and double that of the same period a year ago.

Viridian noted that one hurdle to previous M&A deals involving two MSOs has been the “enormous integration task of combining different production and marketing systems across multiple states.”

Perhaps Trulieve isn’t concerned because it anticipates that under eventual federal legalization, “they can achieve a much lower cost structure of running an MSO,” according to Viridian.

“This is (Trulieve CEO) Kim Rivers’ big and bold move. Because it’s a huge merger, it will require very disciplined execution. It all comes down to execution.” 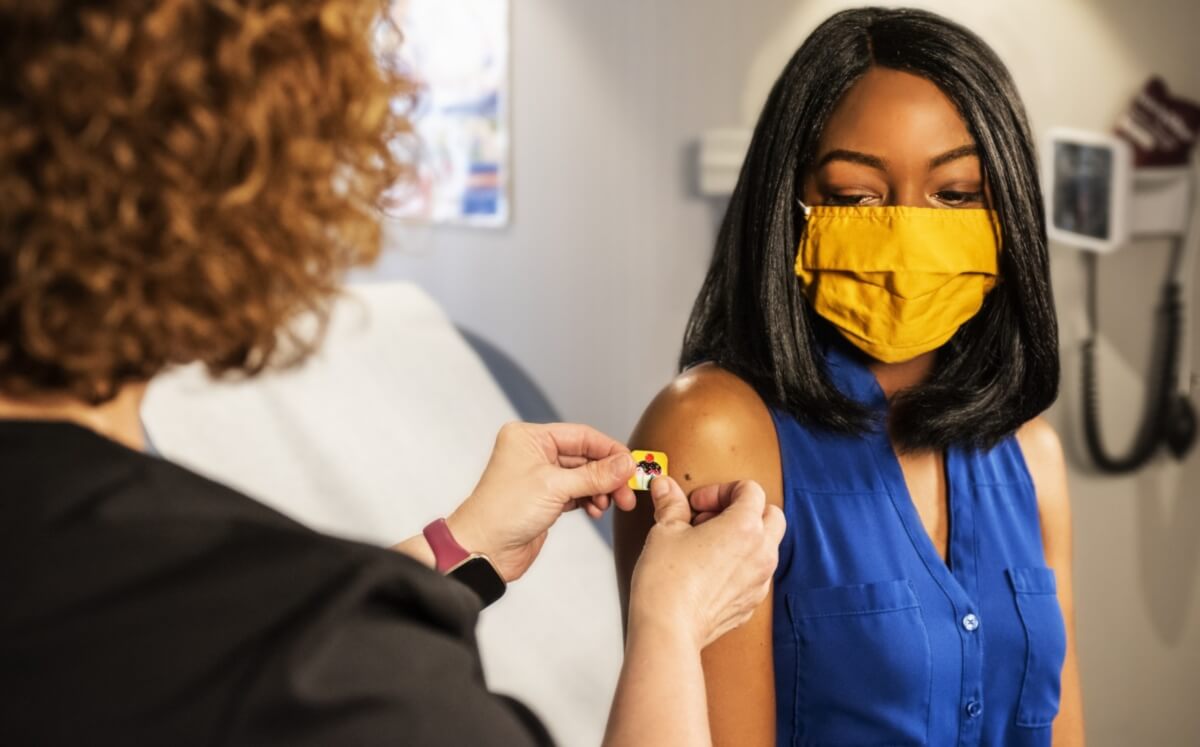 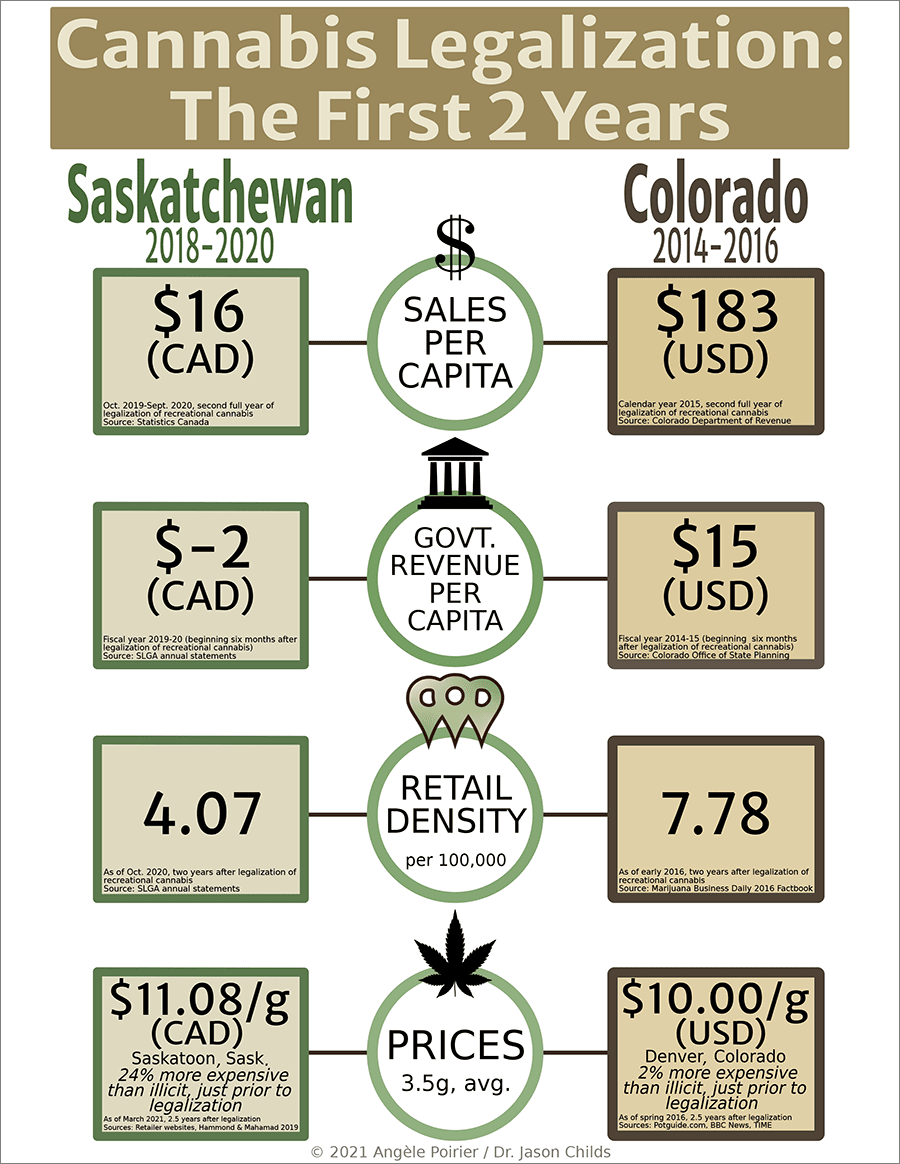