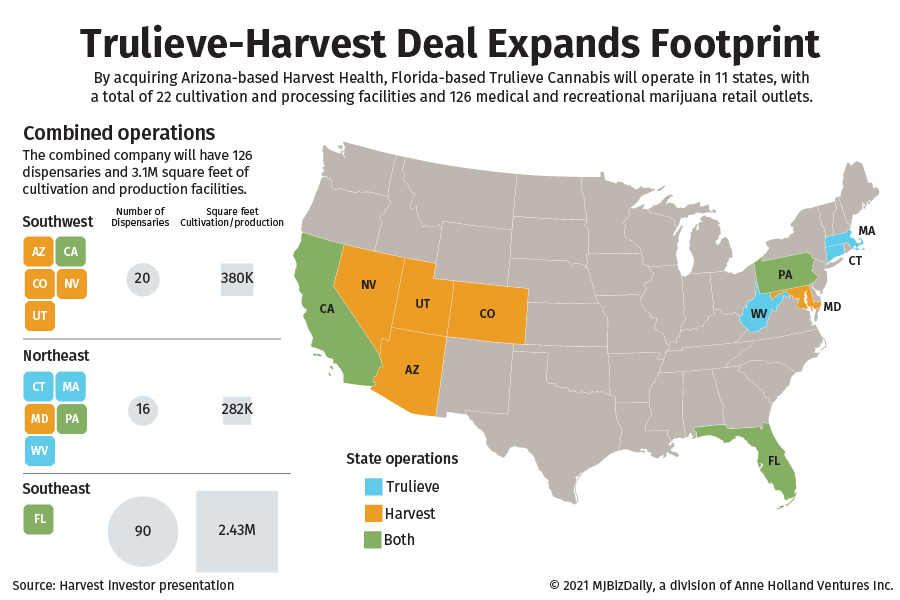 Florida-based Trulieve Cannabis announced an agreement to acquire Arizona-headquartered Harvest Health & Recreation in an all-stock deal valued at about $2.1 billion and touted as the largest U.S. marijuana transaction to date.

The combined multistate marijuana operator will operate in 11 states, with a total of 22 growing and processing facilities and 126 medical and recreational cannabis dispensaries stretching across the Southeast, Northeast and Western United States.

In a Monday morning news release, the companies said the blockbuster deal will create the nation’s largest cannabis company based on their combined retail and cultivation footprint.

According to the release, the new company will be the “most profitable” MSO in the nation, with $461 million in estimated 2021 adjusted earnings before interest, taxes, depreciation, and amortization and estimated 2021 revenue of $1.2 billion.

“Harvest provides us with an immediate and significant presence in new and established markets and accelerates our entry into the adult use space in Arizona,” she said in a statement.

The coronavirus pandemic and financial and regulatory challenges contributed to the deal collapsing, officials from both companies said at the time.

New York investment banking firm Cowen said in a research note Monday morning that a Trulieve-Harvest deal will broaden the two companies’ portfolio across all market segments, from lower-price products to premium brands.

“The key benefit of this transaction is Trulieve’s entry into the Southwest hub, especially Arizona,” Cowen wrote.

By acquiring Arizona-based Harvest Health, Florida-based Trulieve Cannabis will operate in 11 states, with a total of 22 cultivation and processing facilities and 126 medical and recreational marijuana retail outlets. Estimated figures of the combined companies:

Cowen noted that Harvest is the market leader in Arizona, operating 15 retail locations with licenses for four additional outlets.

Harvest also has 329,000 square feet of cultivation and processing facilities in Arizona across five facilities.

Trulieve has dispensaries in California, Connecticut, Massachusetts and Pennsylvania, but the company is most known for its dominance in Florida, where it has 82 dispensaries, according to state data.

In addition to Arizona, Harvest has dispensaries in California, Florida, Maryland and Pennsylvania, according to its website.

Cowen said that the Harvest acquisition will increase Trulieve’s dispensary count by 39 to 126.

Mike Regan, founder and analyst of Denver-based MJResearchCo, said the deal would address criticisms that investors have leveled at both companies.

“That Trulieve was primarily a single-state operator in medical-only Florida and that Harvest had too much debt,” Regan wrote in an email to MJBizDaily.

“By combining them, the debt becomes more manageable and Trulieve gains scale in many other states, including Arizona and Pennsylvania, so the hope is investors will apply higher valuation multiples to the combination.

“The risks are going to be in the integration of the assets and teams.”

Andrew Partheniou, an analyst with St. Louis-based investment banking firm Stifel, wrote that the combined company has some license overlap in Florida and Pennsylvania but might not have to divest assets to close the deal.

“On the (Monday morning) conference call, Trulieve (said it) expects to begin conversations with regulators this week with the goal of maximizing the number of licenses retained in the combined company,” he noted.

The transaction has been unanimously approved by Trulieve’s and Harvest’s boards of directors.

The deal is subject to approval by two-thirds of Harvest shareholders and regulators. It also must be approved by the Supreme Court of British Columbia because the transaction will be affected by a “plan of arrangement pursuant to the Business Corporations Act (British Columbia).”

Shares of Harvest, which trades on the U.S. over-the-counter markets under the ticker symbol HRVSF and on the Canadian Securities Exchange as HARV, were up around 15% in morning trading Monday.

Trulieve’s shares, traded on the OTC markets as TCNNF and on the CSE as TRUL, were down slightly.