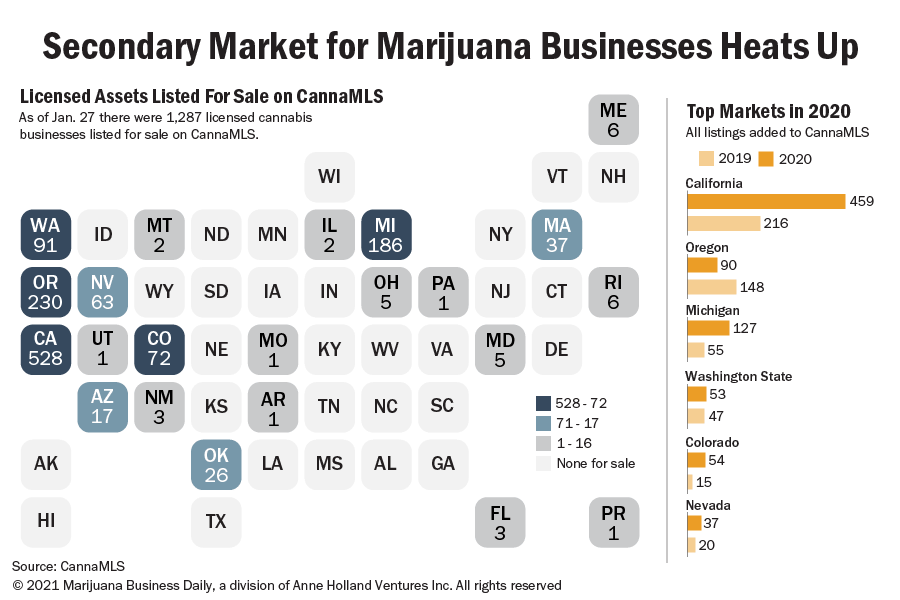 The market for buying and selling licensed cannabis businesses has perhaps never been hotter, with demand fueled by new entrants into the industry, hopes for federal marijuana reform and multistate operators keen to expand their footprint.

On the flip side, marijuana business owners selling their properties on the secondary market aim to cash in on the boom, according to industry officials.

Also included in the mix are hemp businesses, licenses for marijuana companies with no real estate attached and stand-alone cannabis stores, grows, manufacturing plants and other assets.

“The cannabis business is piping hot right now,” said Ryan George, founder of California-based 420Property.com, a website that lists marijuana businesses and properties across the country that are for sale.

“The ones that are selling are getting higher premiums, because there’s a lack of inventory.”

George said his site, which launched in 2016, has gotten unprecedented attention in the past year.

He estimated that user traffic is up 60% in 2020 over 2019. Currently, George said, his site has roughly 3,500 listings for cannabis-industry assets.

A major reason the secondary market has been growing steadily over time is because most U.S. marijuana markets have caps on the number of business licenses issued.

Those caps mean it’s easier for new market entrants to get in by purchasing an existing business instead of trying to win a competitive bidding process for oft-coveted licenses.

Other factors are at play, too. Industry officials said they’ve seen interest surge because of:

At the same time, business owners are motivated to sell, sources said, attracted by:

The number of cannabis businesses and assets for sale jumped in 2020 from 2019 in several established state markets, including Arizona, California, Colorado, Massachusetts, Nevada, Oklahoma and Washington, according to data from Seattle-based CannaMLS, another website dedicated to listings for MJ businesses and properties.

Oregon was the only state with a sizable marijuana industry where listings decreased from 2019 to 2020.

But Green indicated that decline stemmed from the state’s 2019 moratorium on new cultivation licenses, which she said led to a “buying frenzy” that year.

As of late January 2021, CannaMLS had about 5,000 listings nationally, including 1,287 for licensed marijuana companies in 21 states and Puerto Rico that were for sale.

The rest were a mixture of hemp businesses, real estate zoned for marijuana companies or related assets.

A wide variety of factors can lead to a bump in the number of assets for sale, such as a state market transitioning from medical only to recreational or another type of regulatory change, such as Oregon’s cultivation-license moratorium, Green said.

Prices can also run the gamut, from about $100,000 on the low end to $30 million or more, Green noted, depending on factors such as the number of licenses available in a given state.

In markets such as California and Oklahoma, which don’t have statewide license caps, prices will be lower than in Arizona or Florida, which have strict limits on the number of marijuana business permits.

For instance, Green said, the average asking price in Michigan for a retail shop shot up from $2.8 million in 2019 to $4.3 million in 2020, primarily because of the start of recreational marijuana sales in December 2019.

But in California – which was an exception to the average national price increases – many business valuations went down on the secondary market, from $5.7 million to $5 million for a stand-alone retailer between 2019 and 2020.

“We have heard anecdotally that many operators were not able to keep up with California’s market challenges, including high taxes and operation costs as well as increased competition from both regulated and black-market businesses, forcing many companies to sell rather than continue operations,” Green said.

The price drop is another reason many business owners there are selling – to get a solid price before the market devalues their companies even further.

Despite all the activity, it’s important to recognize that every U.S. state market is unique, with separate characteristics that add to – or detract from – business valuations.

In short, a cannabis store in one state can sell for a much different price in another.

“I’ve seen equivalent licenses sell for as much as a 50% difference. It’s really about how they value it,” said Alex Freedman, a Los Angeles-based consultant and attorney who also brokers deals.

But one of the primary trends that several market watchers noted was the entrance of entrepreneurs who were exiting another industry that had been hammered by the coronavirus.

“A lot of the buyers we’re dealing with are not even in the cannabis industry. Most of the people we sell to have, say, 15 or 20 restaurants in the Midwest. Gym owners,” said Mathews, who said he saw deals “skyrocket” after California dubbed its MJ industry “essential” last March.

“They’re leaving the industry they’re in, like the restaurant or service industry, and they’re jumping right into cannabis” because they have the impression that it’s recession-proof.

It’s also, Mathews said, an increasingly attractive time to sell for a wide variety of reasons.

For instance, he said, he’s seen a lot of existing retailers sell their shops in favor of entering indoor cultivation, because social equity programs in cities such as L.A. and San Francisco are diluting the value of retail shops, while wholesale cultivation prices have been rising in recent months.

“We are witnessing a rapid and substantial consolidation of the cannabis industry, which is driving the secondary market for these licenses to an all-time high,” Green wrote in an email to Marijuana Business Daily.

“From single-location assets to mid-cap multistate operators, we’ve seen a significant influx in M&A activity, which I believe is being fueled by new investor capital emboldened by recent political shifts in favor of the industry’s long-term success.”

For most of 2019 and 2020, Stefan said, there was little investment money to finance acquisition deals.

But investors have returned to the table after seeing publicly traded companies such as Curaleaf and Green Thumb Industries post solid performances. That has meant a renewed surge in M&A activity.

“Now that the money’s back, we’re going back to those sellers and saying, ‘Hey, now we have money, are you still selling?’” Stefan said.

“We are seeing a lot of new sellers come in because the money’s coming in. As the capital flows into the market, it’s going to increase the value of those assets.”

And, he pointed out, the possibility of being acquired by a large MSO – in part for stock that could only get more valuable over time – has become an appealing exit opportunity for mom-and-pop business owners.

That has led to an increase in the number of businesses being sold for a combination of cash, stock and debt notes, split roughly into a third each, according to Stefan.

“That stock can double,” Stefan said. “You put your company’s revenue into that company, and now it’s worth five times what it was worth, and your stock went up accordingly.

“That is a great mode of wealth creation.”

By the same token, Freedman said, existing businesses have had plenty of reasons to sell, particularly in California, despite the record sales numbers the state recorded for 2020.

“An enormous part of it is people getting into the industry, chasing the ‘green rush,’ and having no idea how to run a business,” Freedman said.

“More often than not, those people are going to find that they need to get out.”