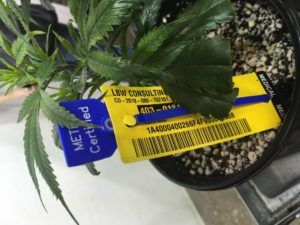 Problems with California’s seed-to-sale tracking system are causing cannabis companies to spend thousands of dollars in extra time and money to remain in compliance with state regulations.

The state pays Metrc, a Florida-based company with contracts in 15 states plus Washington DC, to handle the traceability system that tracks transactions and the movement of product through the commercial marijuana supply chain.

Industry officials in California, however, complain that over the past two months, Metrc has been down frequently, with outages lasting up to nine hours at a time.

The downtime prevents cannabis growers, distributors, retailers and other businesses from performing basic functions, such as invoicing and making product transfers to other companies.

“It’s a lot of extra hours and distraction and stress.”

License holders use Flourish to manage inventory and track purchasing, among other functions.

When the system is down, cannabis companies’ employees are forced to input traceability data manually – for example, a grower selling pounds of flower to an extractor.

That requires a dedicated worker who is specifically trained in data entry for Metrc software.

Griffin estimates the impact in the thousands of dollars per company, more or less depending on the amount of business a company does.

However, in an emailed statement, a spokesperson for the California Department of Food and Agriculture – speaking on behalf of Metrc as well as the state – confirmed that Metrc has experienced “intermittent performance issues” since Feb. 17, with the most severe issues occurring Feb. 25 and March 1.

“However, neither Metrc nor its API were ever offline,” the CDFA noted, referring to an application programming interface.

The root of the problem is third-party software used by cannabis companies for compliance can’t communicate with Metrc’s database through the API when the tracking system experiences issues.

The CDFA blames a small number of integrators for using the API in a way that affects Metrc’s overall performance.

“Specifically, the API is being impacted by the amount, method and time of the data requests being sent by these integrators, as many of the requests are redundant,” according to the CDFA.

The repeated requests consume Metrc’s technology resources and slow performance, according to the state.

And while Metrc has upped its system resources significantly to address the increase in API traffic, the issues persist.

The state has been working with Metrc since October to add tweaks to the system – such as data optimization and rate limiting – to moderate integrator traffic and alleviate any unnecessary stress on the system.

“These policies will allow integrators to continue reporting into the system while regulating their impact on other users and overall system performance,” according to the CDFA.

At Oakland-based Nabis, a licensed distributor, CEO Vince Ning said his team has been forced at times to manually input orders into the Metrc website rather than using software that works with the API because the Metrc side has slowed so much.

The labor costs can vary, depending on the size of the order and the amount of time needed to input the data by hand.

According to Ning, manually adding so-called certificates of analysis and line items and other data entry can cause each order to take up to 15 minutes.

That “can bubble up pretty quickly” when Ning’s company is working with thousands of orders.

“When things do fall back to the manual processes, it does strain our operations,” he added.

Although the slowdowns with Metrc haven’t cost Nabis any material business, Ning imagines some orders were delayed since companies across the state are dealing with this problem.

Jennifer Gallerani, chair of the Cannabis Distributors Association and vice president of logistics at Nevada-based marijuana software and services firm Blackbird, pointed out that the problem isn’t with Metrc’s servers but the API.

In early March she said the API wasn’t working for two to nine hours every day.

Although she said it’s difficult to put a dollar amount on the lost revenue associated with the Metrc issues, Gallerani cited the time spent for employees to switch from using the API to paper logs and make direct entries.

“You’re losing efficiencies because you’re not using the software,” she added.

Gallerani also mentioned the time lost when workers are trying to shore up the inevitable discrepancies caused by human error.

“There’s no undo button,” she said.

Gallerani would like to see the state require Metrc to report the status of the API in real time on a website available to all licensed California cannabis companies.

“So the impetus would not fall on the operators to know when it’s not working,” she added.

Flourish’s Griffin agreed, saying “if there’s an outage, everyone should be notified. That’s pretty typical for every other system on the planet.”

Right now, his team must be on the lookout for slowdowns.

“Simple communication would go a long way,” Griffin added. “Why would they want five thousand businesses to open a support ticket when they could just send an email out with an update?”

Gallerani would also like to see California provide more training to employees on how to manually enter data into the system.

The CDFA contends extensive training has been offered,.

“To date, Metrc has supported 750 trainings in California and continues to offer virtual training on a weekly basis,” the department said in a statement.

Each cannabis company is required to have a dedicated Metrc account manager who completes the California Cannabis Track-and-Trace Metrc system-user training within five days of receiving a license.

“We encourage these account managers to be proactive and train their staff so there is always someone available to work directly within the Metrc application,” a CDFA spokesperson said.