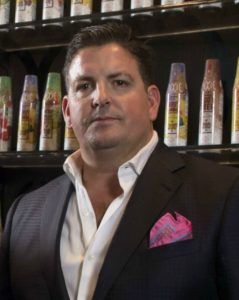 Tripp Keber took many by surprise in December when he stepped down as CEO of Denver-based Dixie Brands, one of the most successful multistate companies in the marijuana industry.

His decision to exit the edibles company seemed to come out of the blue. But, in fact, it was more than a year in the making.

A few paragraphs in, Keber started feeling nauseous. Then he asked himself a question:

Though he had been the right person to launch Dixie, was he the wrong person to manage the company as it grew?

Keber decided he was, indeed, the wrong person to lead the company he co-founded with Chuck Smith in 2010.

So he stepped down and into a position with BR Brands, an affiliate of New York private equity firm Rose Capital. The latter has made investments in several cannabis companies, including Dixie.

With BR Brands, Keber will be in a leadership role with responsibility for identifying infused-products companies for potential investments.

He spoke with Marijuana Business Daily about his decision to leave Dixie, how it reflects on where the industry is going and what the future holds for him.

Why did you leave Dixie?

Dixie was a small company for its first six-plus years, and it allowed somebody with my skill sets, a serial entrepreneur, to run the company.

My average tenure at a company (before Dixie) was three years. And typically, I would find an exit strategy or pivot to the next one.

But that wasn’t the case here because, in Colorado, your business is tied to you as an individual. Till this day, I am the sole owner of those licenses.

In late 2016, I read the Hamm article and realized I was reading about myself.

It was talking about passionate, dedicated, loyal individuals who built a strong team – whose members were fiercely loyal to each other – and who had a delusional confidence.

I don’t mean to be braggadocio, but it takes a lot of humility to admit that I needed to step back.

But fortunately, because of the trust I have in my partner (Smith), my board and investor partners, we were able to engage in a dialogue.

That dialogue took a lot of interesting turns, and it was emotional.

But 14 months later, I think it was a win-win-win. A win for the team members and my investor partners and last, but not least, for myself.

How did you end up at BR Brands?

Rose has been investing in Dixie since the middle of 2016, so we know each other very well.

This is where ego comes in, and I do have one.

I still fundamentally believe, and I’ve heard it from hundreds of parties, that I’m an industry leader – their words, not mine – that I have a lot to offer the industry.

You won’t find much about these two companies: By design, Rose Capital and BR Brands have been in the shadows.

But I will drag them out into the light and we’ll make a much more appropriate splash.

I don’t think it’ll be about Tripp Keber standing in front of a wall full of elixirs.

I think it’ll be Tripp Keber and his partners standing behind the new face of cannabis, whoever those individuals may be.

Did you have to pick up new skills for this position?

Yup. My core competencies at Dixie have been business development, investor relations, marketing and sales, and security.

I’m going to need to learn other states’ and potentially other countries’ laws because of the opportunities that are emerging internationally.

I feel like I’m a kid going to a new school, and I’m really excited about it.

But I’m also anxious – I’m not the chief anymore.

But that’s OK, that’s where that humility is going to play an important role.

What can you offer BR Brands?

There are companies out there that can leverage the experience that I have but also the skill sets that my partners in Rose Capital have, and BR Brands.

I also believe there’s going to be billions of dollars pumped into the industry over the next 24 to 36 months because of what has taken place in Canada, and specifically the public markets.

I believe that our firm’s style will be not to focus on individuals but the brands which people align with.

There are hundreds of brands that are going to win.

Are you one of those brands?

Take a good hard look at yourself as a leader, or as a key member of a management team, and ask if you have everything you need to make it.

If yes, good luck. If no, please approach us and let us help you.

What are the top qualities that an infused products company needs to have to catch the eye of a firm like Rose Capital?

The leadership, the management.

It’s imperative to have individuals that are committed.

It’s important to have a thoughtful and articulate brand, a brand that resonates with a wide array of consumers – the 38-year-old soccer mom, the 22-year-old ski lift operator, the grandmother who has cancer.

You have to be committed to compliance.

You have to show flexibility.

That’s what we look for in entrepreneurs and brands.

2 comments on “Starting up, scaling and moving on: Q&A with cannabis pioneer Tripp Keber”