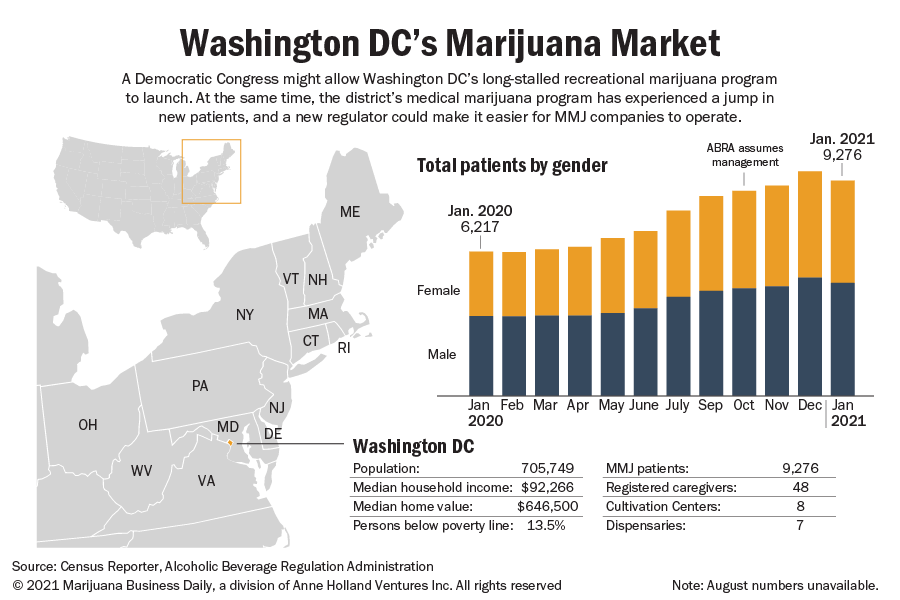 Washington DC’s long-stalled recreational cannabis market could get a new lease on life now that Democrats control both chambers of Congress, a development that could generate more than $200 million in annual sales for local marijuana retailers in a few years.

At the same time, the District’s existing medical cannabis companies have gotten a shot in the arm now that a new regulatory agency oversees the industry.

The ABRA also would likely play a key part in rolling out a new recreational program.

With Democrats now in control of Congress, recreational sales could begin in roughly one year, one local industry executive predicted.

“I think it’s very possible that we could see sales by the end of 2021,” said Adam Goers, vice president of corporate affairs at Columbia Care, a New York-based multistate operator with a cultivation site in the District, plus a dispensary that operates as Capital City Care.

“The worst case is that we’re seeing it sometime in early 2022.”

Washington DC voters passed a recreational marijuana legalization referendum in 2014, one year after the launch of the District’s medical program.

That was the same year Republicans took control of both chambers of Congress. 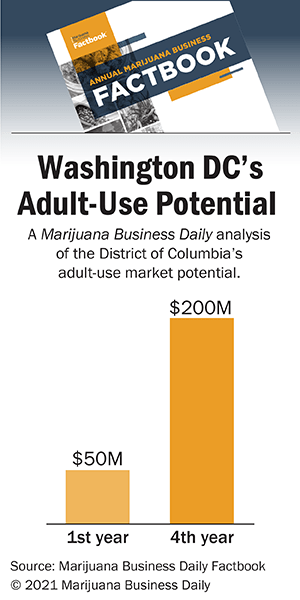 With their firm grip on Congress, Republicans used an arcane federal law to attach a rider to the federal budget bill prohibiting the District from using tax dollars to set up a recreational marketplace.

Now that Democrats control Congress, Washington DC cannabis industry executives say it’s a matter of when, not if, lawmakers will jettison the rider.

“I think our chances are much better, because the majority of the members of Congress truly support cannabis,” said Linda Mercado Greene, founder and owner of Anacostia Organics, a District dispensary.

Congress could undo the rider soon, even within a month or two, observers said.

Alternatively, Congress could let the rider lapse when the budget bill expires at the end of the year, paving the way for the launch of the recreational program.

Marijuana Business Daily projects the launch of a recreational marketplace could generate $50 million in retail sales the first year and more than $200 million the fourth year.

Business operators say it would be possible to begin the program quickly because of the existing medical marketplace.

Also, the ABRA is reported to have been working on developing recreational regulations.

“It’s not as though the mayor and the City Council haven’t been looking at this issue. DC has a pretty good framework already on how to open up sales quickly,” Goers said. “I think that 90% of the work has been done.”

“We’re preparing for it,” Greene said. “The legal licensees are working closely with ABRA.”

Calls and emails to Washington DC Mayor Muriel Bowser’s office were not returned.

A spokesperson for the ABRA said the agency could have announcements to make about the recreational program later this month.

Meanwhile, Washington DC’s medical marijuana program has experienced a surge in patient numbers over the past year.

That increase come comes amid a change in regulators, with the ABRA replacing the District’s health department last October.

The biggest factor, executives said, was a DC Health decision in February 2020 to temporarily eliminate MMJ card expirations. The extension has been periodically renewed, with the most recent one going until the beginning of May.

That eliminated the need for patients to renew cards, an inconvenience that kept many from staying in the program.

“It’s like a funnel where patients are consistently dropping out the bottom and our job is to consistently kind of push them back into the top of that funnel,” said Chanda Macias, owner and general manager of the National Holistic Healing Center.

“That bottom that they’ve been falling out of has been closed off.”

Despite these positive efforts, District MMJ operators said the health department lacked adequate staffing and its mission meant the agency was less likely to help the industry.

“I think that the mayor’s office, as well as broad stakeholders, recognize that the department of health was not well situated to oversee this,” Goers said.

Industry executives welcomed the arrival of the ABRA.

“They are responsive. They stay in touch with us. They have calls with us all the time. They’re very engaging,” Greene said.

Washington DC operators also said the agency has implemented a number of changes that should help the industry to expand. Among other steps, the ABRA:

The Marijuana Business Factbook projects that MMJ sales via dispensaries in 2021 will total $17 million to $21 million, up from an estimated $16 million to $19 million last year.

Neither of Washington DC’s two testing-lab licenses have been awarded, either.

All seven dispensary licenses allotted under the program have also been awarded.

The changes and new opportunities have local cannabis industry executives feeling optimistic about the future, including the possible rollout of an adult-use program.

“We feel like things are headed in that direction,” Macias said.