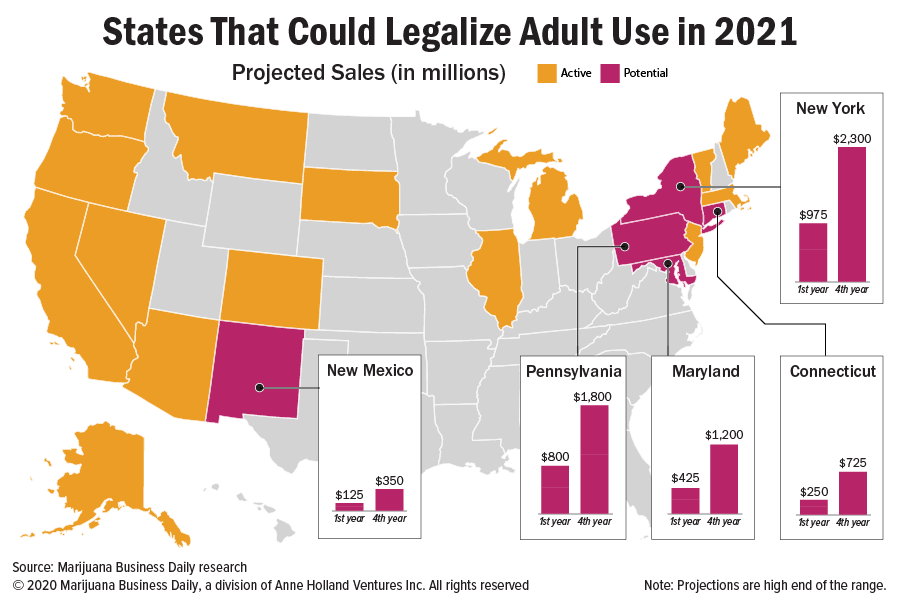 (The map above has been updated to denote that Alaska is among the “active” states.)

Recreational marijuana legalization victories at the ballot box in Arizona and New Jersey this month have set the table for adult-use legalization in a handful of nearby states in 2021 – with more than $6 billion in business opportunities possibly up for grabs within a few years.

One incentive for New York and Pennsylvania to act: New Jersey’s legalization of adult-use marijuana on Nov. 3 could result in MJ customers being siphoned from both states.

The coronavirus pandemic also has drained state tax coffers, and some are looking at recreational cannabis to help offset those losses.

Marijuana Business Daily projects that recreational marijuana markets in New York, Connecticut, Pennsylvania, Maryland and New Mexico could generate more than $2.5 billion in sales combined during the first full year of their programs and up to $6.4 billion annually within four years. (See graphic above.)

Legalization would generate new opportunities for plant-touching businesses such as growers, processors, manufacturers and retailers.

Hawkins and other industry experts believe Pennsylvania could present tougher sledding because the state Legislature remains in the hands of Republicans, and key senators have resisted legalizing recreational marijuana.

In addition to the five states listed above, other states could come into play in the next two years, either through legislative action or 2022 ballot initiatives, Hawkins and other industry insiders agreed.

States to watch for potential legalization of adult use in 2022 by legislative action:

Northam noted the process may take two years. A joint legislative audit and review commission recently published a study on key considerations for legalizing adult use in the state.

The study included various cost-benefit options for ensuring social equity and asserted that “medical marijuana businesses should not be allowed to enter the commercial market before other businesses, based on lessons learned in other states.”

“We’re at 15 (states that have legalized adult use) now, and it’s not outside the realm of possibility that we can be at 25 states” in the near future, Hawkins said.

Northeast in the spotlight

“The most near-term tailwind will come from adult-use ballot initiatives in AZ (Arizona) and NJ (New Jersey), the latter of which has the potential to result in a domino effect of legislatively driven adult-use legalization across the Northeast,” New York-based investment banking firm Cowen wrote in a report distributed just before Election Day.

Patrick Jonnson, Curaleaf’s regional president in the Northeast, wrote in a recent statement to Marijuana Business Daily that Curaleaf expects that adult-use legislation could be proposed in New York as early as January 2021.

Jonnson wrote that “a legalized and commercialized market will generate not only additional tax revenue but will create over 40,000 new jobs, attract investors and boost tourism.”

Rob DiPisa, partner and co-chair of the cannabis law group at New Jersey-based Cole Schotz, though worried at a recent Marijuana Business Daily Passholder Days Forum that New York’s limited medical cannabis program would make it difficult for the state to “flip the switch” to adult use.

DiPisa is concerned that existing medical marijuana operators wouldn’t be able to produce enough to meet the enormous demand and that the illicit market would continue to thrive.

In that regard, Pennsylvania’s nearly half-billion-dollar medical cannabis program would appear to be better positioned to transition into adult use – if Senate lawmakers can be persuaded, industry insiders said.

Maryland also seems primed to transition to adult use, experts said. Medical marijuana sales in the state are rapidly moving toward a half-billion dollars a year.

Democrats control the state Legislature there, but Gov. Larry Hogan is a Republican who has been unfriendly toward marijuana.

Social justice also could be a stumbling block to adult-use legalization in the Northeast and Mid-Atlantic.

New Jersey’s adult-use implementation bill has been getting pushback from social justice advocates for not explicitly targeting revenues to communities affected by the war on drugs.

Such issues also linger in Maryland in the wake of a 2019 licensing round that was designed to boost diversity but ended up in litigation.

Social equity issues are critical to address in every adult-use legalization effort, DiPisa and other industry officials said.

In October 2019, before the coronavirus pandemic, governors from New Jersey, New York, Pennsylvania and Connecticut met to begin developing a regional framework for adult-use legalization.

“We’re much stronger when we work on a regional basis,” Lamont said at a recent news conference, referring to efforts to control the coronavirus pandemic.

“My thinking is sort of similar when it comes to marijuana,” he added. “I think that we do something, we do it on a regional basis.”

But the effort stalled again in early 2020, a victim of a short legislative session and what some believed was an overly complicated bill favoring special interests.

“One of the issues that I’ve been very cognizant about is not losing the opportunity to move forward with recreational cannabis. And I think part of that is tied to our neighboring states, for sure,” state Senate majority leader Peter Wirth told the NM Political Report just after Arizona voters decided to legalize. 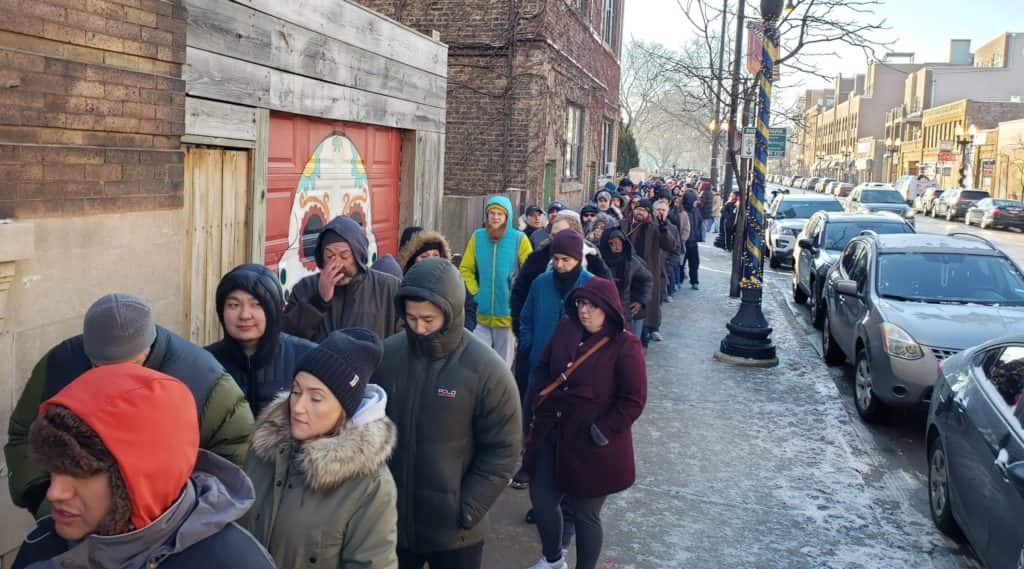