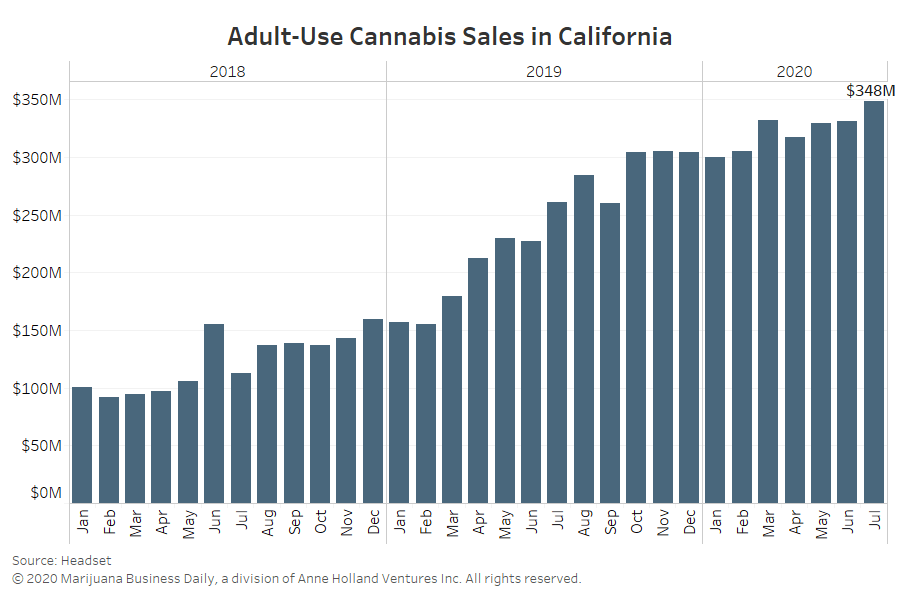 In late 2019, many in the California marijuana industry confidently predicted a rash of companies would go under this year, citing the market’s harsh business conditions and a dearth of investors.

Coming extinctions were accepted with near-universal consensus, in part because profit margins had been almost nonexistent since the legal market launched in 2018. Moreover, several indicators in early 2020 suggested a “bloodbath” was on the way.

But that hasn’t happened in the nation’s largest cannabis market. In fact, if anything, the reverse seems to have come to pass – so far.

Some reasons for that include:

According to Seattle-based Headset, a marijuana industry data analytics firm, the legal cannabis market in California is having a banner year: It posted a record sales month in July of $348 million for recreational marijuana.

Not only that, but as of Aug. 7, active marijuana business license numbers were up in nearly every category over 2019, according to California records.

The only exception is manufacturer licenses, which shrunk slightly from 976 in August 2019 to 937 active permits today.

Currently, active marijuana licenses in California total 9,174. It should be noted that companies can hold multiple licenses, so the number of active businesses is much less.

On paper, however, the legal cannabis market in California is outperforming industry watchers’ dire predictions heading into 2020.

Which begs the question, how did so many get the prediction so wrong?

The world, including the marijuana industry, was caught off-guard earlier this year by the pandemic.

But the virus had several silver linings in store for cannabis companies, as it turned out.

The first was many states designating the cannabis industry as “essential” during the pandemic.

That allowed the entire supply chain to remain in business while countless mainstream companies were forced to stop serving customers.

Pamela Epstein, a board member of the California Cannabis Industry Association, said the dire predictions “would have come to fruition overnight” had the essential designation not been granted by Gov. Gavin Newsom.

Most other states also chose to deem at least medical marijuana companies essential, too.

Add to that the $600 a week in federal jobless benefits that kicked in, along with natural boredom for out-of-work consumers.

In short, it was only natural that marijuana businesses saw a rise in sales, which began in March, the month the virus truly took hold in the United States.

“That is certainly a major part of it. There are more and more people who are consuming greater quantities because of the stimulus.”

Some boost in M&A activity

Because there’s no limit in California on how many licenses one business can hold, the number of active licenses isn’t necessarily a strong indicator of how many companies are operational.

That could mean there is more market contraction happening than meets the eye.

“It was a bit of a buyer’s market six months ago,” Manzuri said. “And right now, I wouldn’t say it’s a seller’s market.

“But people are definitely messaging me, saying, ‘If you hear of anything for sale, let me know.'”

The widespread looting of cannabis businesses in late May and early June, while Black Lives Matter protests took place, also had some ripple effects.

For one, it forced many retailers to close down temporarily, including Blum, which experienced excessive vandalism at two San Francisco Bay Area stores.

The company’s shop in San Leandro had to close for about six weeks before reopening July 15. Its store in Oakland is still closed for repairs and won’t reopen for at least another month.

That – and the already-harsh business conditions – forced operators to double down on their business models, said Derek Peterson, the CEO of Terra Tech Corp., Blum’s parent company.

“I think that’s why we haven’t seen a tremendous amount of failures around the midsize and large-cap companies,” he said.

“A lot of that has happened because a lot of people are materially invested, so they continue to support, hoping the market’s going to come out of it at some point.”

That, however, is going to contribute to further obstacles, because the estimated millions of dollars of legal MJ product that were stolen from dozens of businesses during the robberies is being sold on the illicit market, Peterson noted.

On top of that, there’s likely a more direct connection between the legal and illegal marijuana markets, several sources said.

DeAngelo noted that one potential explanation for the lack of business failures is “maybe people are running things out the backdoor, and it’s keeping them afloat. That’s always a possibility.”

Sacramento-based consultant Jackie McGowan agreed, noting in an email to Marijuana Business Daily: “Most businesses are in survival mode, are leaner and meaner than they have ever been, and many may be less inclined to follow all of the rules while facing and weathering extinction events galore.”

Another factor, according to an industry source who requested anonymity to discuss a sensitive topic, is that illicit-market actors have begun buying financially distressed distribution licenses in order to legally buy marijuana product from growers and manufacturers. The illegal operators then turn around and sell the legal product on the underground market.

“That by itself has rescued so many companies from going under, because all of a sudden now they (farmers and manufacturers) have a home to sell their product, where otherwise they wouldn’t have, and they would have been sitting on product they couldn’t sell or had to sell at a loss,” the source said.

More pain still on the way?

The problems that many predicted for the California marijuana sector in late 2019 haven’t disappeared, despite how well the industry has fared thus far in 2020.

Systemic problems such as high tax rates, a thriving illicit market and the lack of access to banking haven’t been solved.

That has some expecting a wave of company failures once the world returns to a post-COVID semblance of normalcy.

“Just as with the economy, there’s an artificial hold,” Epstein said. “We’re currently living in a COVID bubble.”

But the landscape has improved markedly for a lot of California businesses, Hunt and Peterson agreed.

That will likely offer a lifeline to a lot of companies that might not have been able to find one only months earlier.

“I think we see some people fall by the wayside, and I think we see a tremendous amount of combinations that take place over the next 6-12 months.”

Hunt said his optimism stems from a turnaround in investor sentiment, which he chalked up to the solid stock performance since March by several major publicly traded companies.

“I do (think there’s still an extinction wave coming), but I think it’s muted, and it’s muted because of … a systemic change to investor sentiment,” Hunt said.