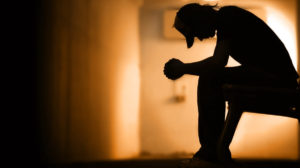 The U.S. Navy veteran and former general contractor had been trying for more than three years to get a 1-acre permit to farm cannabis in his home region of Sonoma County.

But all he’d been able to establish was a small, 6,200-square-foot cultivation area that wasn’t enough to pay the bills or care for his wife and two children.

Drips, the co-owner of Petaluma Hill Farms, was almost $750,000 in debt because of a seemingly endless cycle of government inspections, expert reviews, zoning hearings and attorneys’ fees.

There was no end in sight.

So Drips made a decision.

“I have a pretty good life insurance policy, and if I killed myself, they’d only award 85% of the value. But between that and the Social Security check, at least my son wouldn’t be going hungry anymore. And his mom wouldn’t be living at the poverty level,” Drips recalled thinking.

“After dinner, I picked up the gun and left the house. And I sat in the car and recorded a goodbye story to my son.”

But then, he recalled, “my son’s face flashed in front of my eyes,” spurring Drips to move the gun as it went off, “and the bullet took the hair off the side of my cheek.”

Drips survived that close call, and things have been looking up ever since, he said: Petaluma Hill Farms even turned a modest profit in 2020.

But Drips – and several other industry insiders – say he’s not the only cannabis entrepreneur in California who’s come that close to the edge.

Rather, many small business owners have been struggling for months, if not years, because of:

“It’s a hostile environment to small business,” said Genine Coleman, the executive director of the Mendocino County-based Origins Council. “That’s absolutely a critique of the licensing and regulatory framework.”

Coleman and other industry insiders report that other farmers have taken their own lives, all for similar reasons: depression stemming from the difficult business landscape in California or the thought that family members might be better off collecting life insurance.

That has industry insiders now highlighting the need for mental health and community support services, such as the Hessel Farmers Grange.

The loosely organized group of marijuana farmers and others in the industry meets at a hall in Sebastopol the second Tuesday of every month to share stories and offer whatever help they can to each other.

“It’s a lot harder to be strong alone. And when you can’t find the strength yourself, and somebody else can’t, standing together you can find enough strength by leaning on your fellow man or woman,” Drips said, adding that the Grange community has proved to be a blessing for his family.

Though MJBizDaily could not independently confirm any marijuana business owner suicides, several sources said there have been at least five this year alone. The sources declined to identify any incidents out of respect for their families, who asked for privacy.

California marijuana industry consultant Jackie McGowan said the suicides she’s aware of are one of the reasons she’s running for governor against incumbent Gov. Gavin Newsom, who is facing a recall election next month.

“I do believe this is a crisis. Small businesses and large businesses alike are suffering … to the point where they don’t see any way out,” McGowan said.

If elected, McGowan said, she’d repeal the state cultivation tax and reclassify marijuana as an agricultural crop. She reckons such a move could give small marijuana businesses relief.

Coleman described the mounting number of suicides as a “human crisis,” noting homestead farmers are especially at risk because they’ve got more than their businesses on the line: Their homes are at risk, as are their families’ well-being.

“It’s the whole spectrum of things you experience when you’re in that position,” Coleman said. “And when it starts to be systemic and it starts to be regionwide, then it sort of compounds the fear.

“We’ve got really, really bad situations in a number of the regions we represent.”

Coleman did note that the Emerald Triangle generally has higher suicide rates than many other areas of California.

It’s also the case that farming overall has a higher risk of suicide, depression and mental-health issues than other professions.

In 2019, for instance, there was a rash of hemp farmer suicides after a disappointing harvest season.

And a 2020 study by the U.S. Centers for Disease Control and Prevention found that farmers are among the most likely to die by suicide versus other occupations.

“What people are aware of is how many of them are hanging on for dear life and how many are literally crying themselves to sleep or waking up in the morning feel completely discouraged,” he noted.

“That is well known, and that is constant, from Mendocino County to Sonoma County, from Humboldt County to Trinity County.”

Coleman and others said it’s hard to see when there might be significant relief on the horizon for small farmers such as Drips and other business owners.

She noted it’s tough to predict any policy victories on the legislative front since attempts to lower cannabis tax rates in the Legislature have failed repeatedly.

Also, competition is getting fiercer every month as more large-scale grow operations come online. Moreover, thousands of cannabis farmers have been prevented from joining the legal market because of a restrictive and costly regulatory system.

In addition, the wholesale market for outdoor-grown cannabis flower has been cratering over the summer, De La Paz said.

“This type of market hit, I would absolutely say it’s concerning, especially for the small farms and legacy business community … to the point where we’re seeing an uptick of suicide rates in the Emerald Triangle,” De La Paz said.

He believes there are steps that can be taken to fight the self-inflicted deaths, including:

“If tax reform doesn’t happen soon, then we need to create a fund from tax revenues that goes toward financial support for struggling small operators.”

In the spirit of the Hessel Farmers Grange, Drips pleaded that anyone in the industry who’s struggling with depression can reach out to him directly via social media and he’ll lend an ear or help in whatever way he can.

“If somebody is feeling low, I want anybody in the industry who’s having these thoughts and feelings, reach out to me on social media. I don’t care if it’s Facebook or Instagram.

“Call me before you end things,” Drips said. “I’ve been there.”

If you or someone you know is in crisis, mental health resources are available through the National Suicide Prevention Lifeline (800-273-8255) or National Alliance on Mental Illness (800-950-6264).