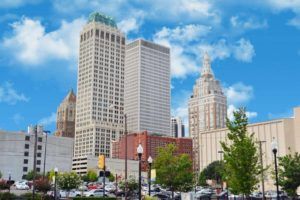 Medical marijuana sales and patient numbers in Oklahoma continue to increase at a staggering rate, indicating the red-hot market has room to grow, although some sectors and parts of the state are saturated with businesses, industry officials say.

The state’s free-market approach so far has proved successful, with April sales topping $60 million. Meanwhile, regulators have issued more than 10,000 licenses, and grower permits account for more than half that total.

“I’m still getting calls from people who want to get into the business … calling me to find property and file applications,” said Sarah Lee Gossett Parrish, an Oklahoma City cannabis attorney. “I think that bodes well for the industry.”

In fact, the state’s lack of license caps and liberal rules for granting patient MMJ cards could serve as a template for companies pushing to open new and existing markets, experts say.

Oklahoma’s medical cannabis program – which launched in October 2018 – is generating nearly $10 million a month in state tax revenue, according to the state Tax Commission, reinforcing the view of industry executives who argue that cannabis programs can help offset declining state revenues during the coronavirus-fueled economic slowdown.

Here’s a look at some key numbers in the state:

Oklahoma helped drive these kinds of numbers by embracing the free market in a way that some industry watchers argue is unprecedented for U.S. marijuana programs. The state has no licensing caps and an easy, fast and affordable licensing process.

Oklahoma, in essence, is letting the market decide how many businesses can survive and thrive.

And regulators are leaving it up to the medical community to determine who should receive MMJ, industry officials note.

“Oklahoma is a testament that you can make a well-functioning cannabis system without making things unduly complicated or unduly burdensome for companies and patients,” said Andrew Livingston, director of economics and research in the Denver office of the Vicente Sederberg cannabis law firm.

It’s the way, Livingston noted, that most other mainstream industries are treated.

The record April sales are equivalent to more than $700 million on an annualized basis, which would double last year’s sales of $345 million.

However, industry experts and dispensary owners suggest the following might have bolstered the April numbers:

“April is always our biggest month, like our Black Friday,” said Keith Laird, co-owner of Okie Kush Club, which has four dispensaries. “Plus, the fact that more people are at home and are looking for relief from stress and pain.”

Also, there are indications that Arkansas residents might be crossing the border to buy lower-priced medical marijuana in Oklahoma.

How many MMJ businesses can the state sustain?

Questions linger about how many growers, processors and dispensaries the Oklahoma market can support.

As of May 1, the state had issued:

What’s uncertain is how many of those are permits are actually being used. That would give a clearer sense of sales per dispensary, what kind of market shakeout might be looming and what kind of opportunities still might exist.

“There’s a big difference between 20% and 50% operating,” Livingston said. “Because we don’t have that information, it’s hard to know (how dispensaries are doing).”

Parrish said her sense is that around 30% are not operating, meaning as many as 70% are. That would still leave a huge number of businesses serving the market.

Laird puts the number of dispensaries in operation at around 60%.

“We didn’t expect saturation on the dispensary side to be as crazy as it was, but it’s starting to slim down,” said Laird, whose Okie Kush has been in operation since January 2019.

Some smaller businesses have folded, some licensees have simply surrendered their permits, industry officials said. Parrish said she also has heard of small growers absorbed into larger operations.

As recently as February, a market glut had driven down prices.

Parrish said she believes that, since then, prices have “firmed up some. The pandemic helped the industry. People wanted to stock up.”

Tax revenues generated from the program are welcome.

“It’s been great for Oklahoma, because oil and gas was a big part of our tax revenue, and, sadly, that industry has really suffered,” Parrish said.

Recognizing the industry’s importance, Oklahoma has declared medical marijuana an “essential business” during the COVID-19 pandemic.

Parrish said she began advising her clients to offer curbside pickup because it wasn’t prohibited by law. State regulators then encouraged the practice.

She hopes that momentum will continue.

Legislation is pending that would legalize home delivery. But it might not happen this year because the Legislature, which is adjourning this month, has been squabbling with the governor over the budget.

Still, Parrish said she’s hopeful that permanent policies such as home delivery will be coming soon.

In the meantime, both Livingston and Parrish said there appears to remain room for further growth.

With some caveats, Parrish said operators are realizing the importance of being vertically integrated, and new businesses need to be savvy in addressing untapped markets and market niches.

For example, Parrish said even a new cultivator could do well if it has a master grower, produces craft strains targeted to particular medical issues and is able to establish a strong brand.

“I always wonder what the ceiling will be in Oklahoma, at what point will growth stop?” Livingston added.