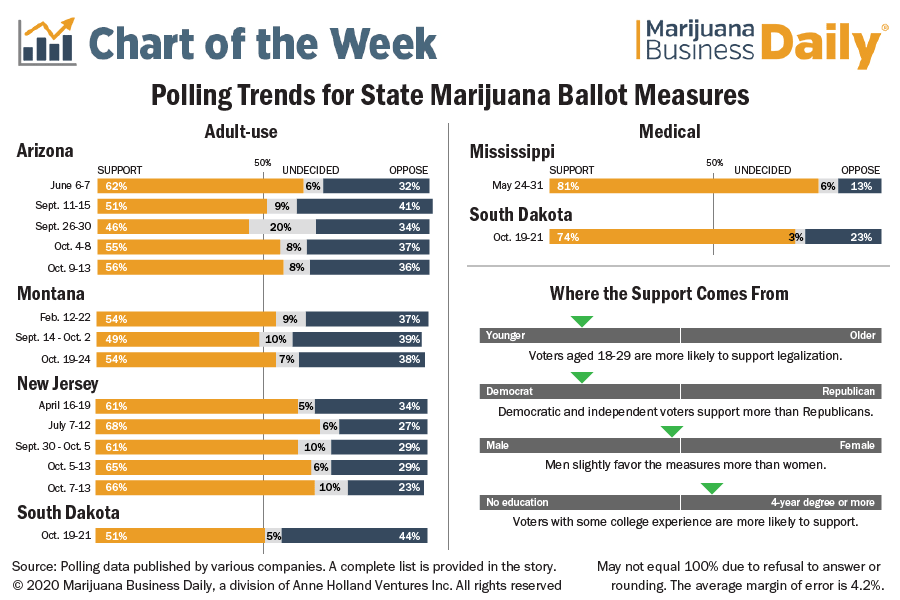 The outlook for marijuana legalization efforts in five states looks positive as voters head to the polls Tuesday, closing out an unusual election season that produced unprecedented early voting and record-setting turnout.

ADVERTISEMENT
South Dakota‘s recreational measure also appears headed for success, but that race is tighter than the others.

If successful, these legalization measures will open new markets that could eventually generate more than $2.5 billion in annual sales within a few years.

Analysis of the demographic data from the polls suggests that 18- to 29-year-old voters are more likely to support legalization, with men favoring the measures slightly more than women do.

Education also seems to play a role, as voters with some college experience are more likely to support marijuana ballot efforts than those without.

Democratic and independent voters, meanwhile, are more supportive than their Republican counterparts.

This could help Democratic candidates in the Republican-leaning states such as Arizona, Mississippi, Montana and South Dakota.

Here’s a look at the polling data for each state:

Recreational marijuana returned to Arizona’s ballot through Proposition 207 after voters narrowly rejected the state’s 2016 measure by less than 3 percentage points.

This year’s sponsor, Smart and Safe Arizona, credits a rewrite of the ballot language for the success in campaign donations and at the polls.

With a lack of serious opposition, the committee easily outraised its opponents by 11-to-1.

While early polls were a bit erratic, October polling by Monmouth University in New Jersey showed support of the measure at 56%, with 36% opposing.

Undecided voters came in at 8%.

If it continues, this turnout pattern bodes well for the measure as Democrats favor marijuana legalization in Arizona more than Republicans do.

In the Monmouth poll, Democratic respondents supported the initiative 69% compared with 38% for Republicans.

Independents showed almost as much support as Democrats, with 63% approving the measure – which could be good news for marijuana advocates in a state where almost a third of registered voters are independent when they turn out to vote.

Legalization advocates in Mississippi finally were able to get a business-friendly measure on the ballot, only to have state lawmakers place a more restrictive alternative in front of the voters.

While polling has been limited, it shows overwhelming support for medical marijuana in the state. In May, California-based FM3 Research asked 602 likely voters if they would support either of the two initiatives; 81% said yes and only 13% said no.

But that doesn’t make MMJ legalization a slam dunk.

The two-step voting process might make it harder for medical marijuana to pass as voters will first be asked if they approve of either measure, then which one they support.

Even then, at least 40% of residents must vote to approve an initiative before it can become law.

According to a recent poll from Montana State University Billings, 54% of respondents approved of the measure, 38% opposed it and 7% were undecided.

This is consistent with polls taken in February and September.

Again, large turnout, especially among young Democrats and independents, would help this measure get through.

Of all the recreational measures on the ballot, New Jersey garners the most support from voters.

A mid-October poll by Stockton University in New Jersey showed 66% of respondents in favor of Public Question 1, the highest of any of the polls Marijuana Business Daily has analyzed this election season.

Only 23% opposed the measure; the rest were undecided.

That support has been consistent since April.

With 8.9 million residents, the state is projected to have recreational sales of $375 million-$400 million in the program’s first year.

Of all the legalization efforts this year, this one might be garnering the most attention as well.

Industry observers expect that legalization in New Jersey could accelerate adoption throughout the Northeast.

South Dakota (adult use and medical)

South Dakota is poised to be the first state to approve both recreational and medical marijuana, but support for the measures is mixed.

Mason-Dixon Polling and Strategy, headquartered in Washington DC, found that while support for the medical marijuana measure was 74%, recreational garnered only 51%.

This makes the state’s adult-use marijuana measure one of the tightest races this year, with 44% opposed. The 5% of undecided voters and a 4% margin of error will most certainly come into play.