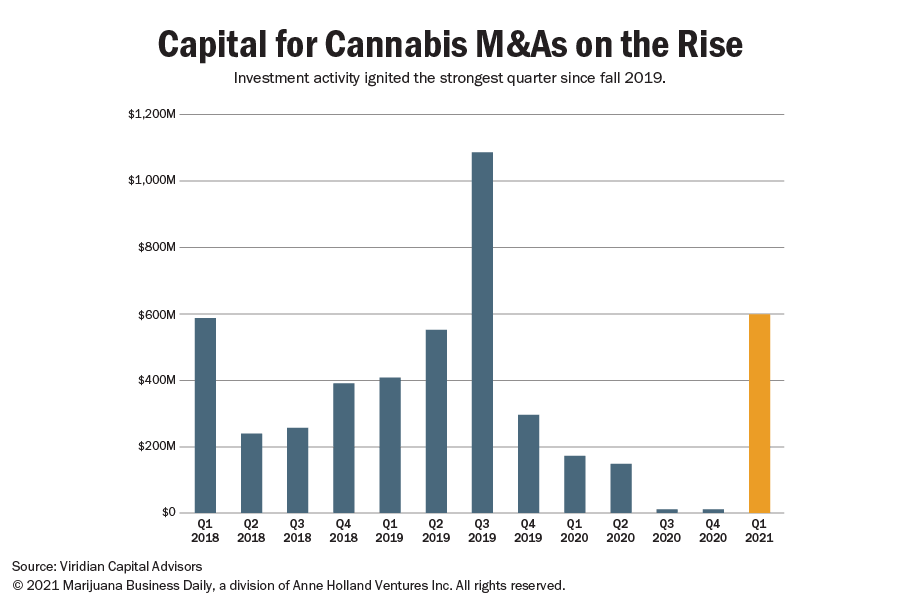 Last quarter’s funding for marijuana M&A amounted to the highest level since the third quarter of 2019 and underscores the flood of recent investments in the cannabis industry after a drought that began in late 2019.

SPACs, or “blank-check” companies, are behind the funding boom. They offer an expedited process for privately held companies to begin trading on public stock exchanges.

The figure for the cannabis M&A funding subsector, published this week by New York-based financial adviser Viridian Capital, was the second-highest quarterly figure since Viridian started tracking the industry in 2015.

The figures don’t include equity and debt financing by marijuana companies, which also is occurring at a strong pace.

The current funding boom is a major turnaround for the cannabis industry.

Investors stopped writing checks in 2019 because many cannabis companies were spending vast amounts of money to gain market share but failed to show a profit. That caused their stock prices to crater.

Three large SPAC initial public offerings have fueled the upswing in the cannabis industry in the first three months of this year, according to Viridian:

The marijuana industry has been lifted by brighter prospects for federal reform as well as stronger fundamentals.

Among other things, investors became even more bullish about the prospects for federal reform when Democrats gained control of the U.S. Senate by winning both seats in Georgia’s Senate runoff races on Jan. 5.

Greiper said during the webinar that the management of publicly held marijuana companies has never been stronger, energized by more predictable growth as markets mature, lower production costs, higher-quality executive teams as well as better financial controls and compliance.

The legalization of a recreational marijuana market in New York might provide another investment impetus, experts said.

Matt Karnes, founder of GreenWave Advisors, which provides financial research, told Marijuana Business Daily that New York City alone would provide a “heightened level of visibility to Wall Street (and Madison Avenue), which could ultimately lead to a surge in invested capital.”

SPACs typically have 18 months to two years to identify targets and complete their transactions.

To date, Viridian said it has tracked about $3.9 billion worth of cannabis SPAC IPOs – capital raised for the purpose of acquiring existing operating companies.

But to date, SPACs have completed only $2.7 billion of transactions. That’s the process of identifying a target, signing a merger or acquisition agreement, completing the deal and taking the business public on a stock exchange.

Hauser listed a number of reasons, including finding the rightsized targets, securing approvals from shareholders and marijuana licensing regulators as well as finding alternative financing if needed.

Viridian noted in its report: “Several SPACs have struggled to find large enough targets to meet their qualifying transaction thresholds and have been forced to put a number of transactions together and attempt tricky simultaneous transaction closes.”

In a deal initially valued at $210 million, the acquired companies include Futureworks (doing business as The Health Center), Shango Holdings, Theraplant and True Harvest.

That deal also reflects a trend in M&A activity in the cannabis industry: While such transactions are up, there are fewer mammoth $500 million-plus deals like the industry was seeing in 2019. Some of those deals were eventually scrapped as market values declined and companies’ fortunes changed.

It “means more of the market is participating on the buyer and seller side,” Greiper said during the webinar which, he added, is a “very, very healthy indicator.”