Though scores of companies seeking dispensary licenses were denied, virtually every application filed by would-be cultivators, processors and testing labs was granted.

Nevada gave applicants the option of keeping their information private, and most chose to do so. But some allowed the state to release their names and scores, providing insight into who won licenses.

Numerous out-of-state companies and business owners from other markets were behind winning applications, capitalizing on opportunities to expand their businesses and develop larger brands.

Another interested trend: Many applicants won licenses for multiple locations, indicating a shift from the mom-and-pop mentality of the past to a big business philosophy. Multiple in-state companies were awarded more than one business license, including:

The next step for those who won preliminary licenses is to get approval from local officials to set up shop, and that process could last up to a year and a half.

What Went Wrong in FL?

The big marijuana story this week was obviously the passage of recreational cannabis sales in Oregon and Alaska, along with adult use in Washington DC. But the near-victory of medical marijuana in Florida also has generated plenty of chatter.

In the days since Amendment 2’s flameout, MMJ proponents have been wondering what went wrong after the measure had been polling astronomically high over the summer.

Some of those proponents, including more than one commenter on Marijuana Business Daily’s website, place dual blame on both campaigns: Drug Free Florida, for running controversial TV ads many called “fear-mongering,” and People United for Medical Marijuana, for not counter-attacking as hard as it could have.

Drug Free ran ads alleging that if Amendment 2 passed, marijuana shops would pop up like pill mills, kids would be able to obtain marijuana without their parents’ consent and felons would be allowed to be caregivers. One memorable spot suggested the measure should be called the “Drug Dealer Protection Act.”

“I would have liked to have seen commercials that dispelled the fear mongering and outright lying the opposition had all over TV,” wrote one Marijuana Business Daily reader in the comments section of a story. “It was shameful – comparing medicinal marijuana dispensaries to pill mills.”

“I was really surprised that United for Care didn’t go after those ads aggressively with their own ads on TV,” Smullen said. “They (Drug Free Florida) clearly got away with something.”

People United did fight Drug Free’s ads, even going so far at one point as to issue a cease-and-desist letter to multiple TV stations running the ads. But it didn’t finance a TV response.

Regardless, MMJ isn’t finished in Florida, Orlando attorney John Morgan promised this week. Morgan, who threw millions of his own fortune into the effort and was the face of the campaign, said the next step is to try to get the state Legislature to act. If that doesn’t work, he vowed to fight to get another measure on the ballot in 2016.

Large investors from outside the industry generally avoid putting money into marijuana businesses because the risks and uncertainty are simply too high.

But that’s changing as the marijuana industry grows and gains wider acceptance.

Case in point: Eaze Solutions LLC, a provider of technology that optimizes medical marijuana delivery, announced this week that it landed $1.5 million from angel and institutional investors in Silicon Valley. Investors financed the project through a syndicate launched by investment vehicles The ArcView Group and Fresh VC via the crowdfunding site AngelList.

The overall amount is peanuts in the VC world. But it’s notable in the cannabis space – where deals tend to be six figures or less. And it could encourage more institutional investors to take a look at the industry.

“I was impressed to see that they attracted institutional investment and Silicon Valley investors,” said Troy Dayton, the CEO of ArcView. “Once they get into this game, investment dollars will really pour in to our sector.”

The deal also shows that investors are eyeing emerging technology for the cannabis industry.

Eaze doesn’t actually handle marijuana. Instead, the company works with dispensaries that employ drivers, charging a lead-generation fee once transactions are complete. The company already has a free application online for users, and it’s negotiating with Apple Inc. and other mobile-technology companies to get on popular app marketplaces, according to the Wall Street Journal.

“(Investors) see huge potential in the intersection between tech and marijuana,” said Keith McCarty, the founder and chief executive officer of Eaze. “As public sentiment has changed to favor marijuana legalization, investors have become more open to funding ventures in the marijuana space.”

Tony Dreibus and John Schroyer contributed to this report 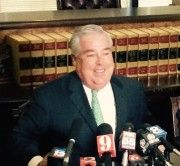