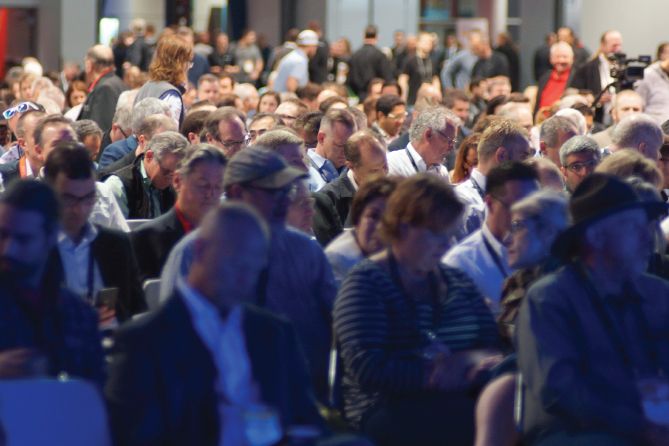 From learning how to start a marijuana company to discovering strategies for expanding an existing business, the 18,000-plus attendees at MJBizCon in November got loads of actionable advice from more than 100 cannabis industry experts.

The event – run by Marijuana Business Daily, which publishes this magazine – was held at the Las Vegas Convention Center and featured 45 sessions focused on cultivation, retail, infused products and concentrates, business strategies, investing, marketing and Canada’s cannabis industry, among other topics.

MJBizCon also hosted pre-conference tracks on the hemp industry, the science of cannabis and the basics of operating a marijuana business.

Marijuana Business Magazine journalists fanned out across the conference to collect business insights and tips from the sessions. Below are 10 takeaways.

Kadens also offered this advice: Be prepared to raise more money than you think you’ll need. Some of your potential investors will no doubt get cold feet for one reason or another.

“I always say that for every $30 million we raised, only $10 million ended up in our bank account after people who committed talked to their lawyers, CPA, financial adviser and spouse,” Kadens said.

In one typical example, he noted, an investor will promise money but then condition it with this caveat: “I have to talk to my spouse,” Kadens said. Translation: “Yeah, he’s out.”

Kadens’ advice: Be prepared for rejection.

“You cannot get upset easily or overly dramatic about people falling out,” he said. “It will happen. You need to build a very robust investor pipeline just like you would a sales pipeline, and you need to track and manage that pipeline methodically.”

2. Get the Right People

With all the demands of getting a marijuana company up and running, it’s easy to overlook the one aspect of your business that’s probably the most important – building your team.

You’ve heard this advice before, but it can’t be stressed enough.

“Surround yourself with people who are experts and trust them to help you build your business,” said Lynn Hondred, CEO of Colorado-based Mary’s Medicinals, a multistate provider of pharmaceutical-grade cannabis products. “Know what you know, and know what you don’t know.”

Shon Williams takes a simple approach to hiring: “I have a no-jerk rule.”

“It’s cancerous to your overall business and can destroy the culture of your business, and culture is key to your success,” added Williams, director of portfolio management and design at MJardin, a Colorado consultancy specializing in cannabis cultivation.

“Position plus personality, character, integrity and overall diversity – including from a background standpoint – is important. … You must trust the people around you.”

And, lest you forget, Williams stressed: “Make sure YOU are not the jerk.”

Up to a third of adults in California, Colorado, Nevada, Oregon and Washington state use marijuana. That’s over 11 million potential customers for marijuana businesses just in those five states, according to an August 2017 study by Ana Hory, the CEO of California-based Enlucem, a wellness community where users share how cannabis has helped them.

Though Hory’s study was specific to those western states, it shows the importance of business intelligence in running a marijuana company.

Among her findings in those states, Hory uncovered these stats about cannabis customers:

Hory’s study also found that the overwhelming preferred product type for heavy cannabis users is loose flower, followed by edibles, pre-rolls and vape cartridges. At the bottom of the list: infused topicals, drinks and tinctures.

She also found that the vast majority of consumers – 78% – are looking for relaxation from their marijuana products, with relief from pain, anxiety and insomnia also comprising purchase motives.

Perhaps one of the more significant findings is that affordability is by far the biggest driver behind retail cannabis purchases. While potency, strains and other considerations still figure into the equation, a whopping 84% of survey respondents said price point was their top priority.

4. Don’t Give Up on Social Media

Natalie Cupps DiBlasi, co-founder of LACED Agency and social media strategist in Redondo Beach, California, said there are plenty of ways cannabis companies can get noticed online. Some of her tips:

Social media companies, including Instagram and Twitter, remove posts that seem to sell “marijuana” or “cannabis” – sometimes even “hemp.” So, don’t use those words. Instead, think about promotions that might escape censors. What about promoting a “Wellness Wednesday” at your dispensary? Or throwing a “Chocolate Week” around Valentine’s Day to move edibles? Get creative with promotions that won’t raise alarms.

Don’t use images of the plant. Period.

Photos and videos are a must. Show people relaxing, or feeling better or having fun. Don’t show cannabis. Show the effects that cannabis has on people.

Don’t stop at Facebook. Pinterest is extremely popular with women, and YouTube reaches more 18-to-49-year-olds than any cable network in the United States. Both platforms are slower to block cannabis posts than some other platforms.

Even if you’re rejected by Facebook, keep trying to market on the platform. “You can’t miss the chance to market to the world’s largest social media audience.”

DeBlasi said it’s also important for cannabis companies to prepare for global legality by establishing brand credibility. So, include language in every single piece of online marketing that your company complies with state and local laws and that cannabis products are intended for adults. “Make it clear that you are a responsible company,” she added.

5. Capitalize on the Potential of Hemp-Derived CBD

There’s a huge untapped cannabis market out there. It’s for cannabidiol, where few brands have any consumer recognition and there is opportunity galore for new producers.

Bethany Gomez – director of research for the cannabis market research firm Brightfield Group – has studied the nation’s hemp-derived CBD market. Her conclusion: No one is yet doing a great job marketing the product.

Of the 200 or so brands selling hemp-derived CBD products, none has more than 7% market share. That’s a shame, Gomez said, because there are so many positives to the product. It doesn’t impair users, and 88% of hemp-derived CBD users surveyed by Brightfield classified it as being “very” or “extremely effective” in treating medical conditions.

CBD makers might not be permitted to make medical claims, but consumers can, and their response level will spread organically, Gomez said. That means getting “earned media,” or coverage from news outlets, which Gomez said CBD makers can do by ensuring customers know how to find them online.

Marijuana growers would be well-served to learn from Big Agriculture practices, according to Hybrid Tek founder Dan Gustafik, whose Oregon company provides design, engineering and consulting services to cannabis cultivators.

Because Big Ag is a giant industry – it represents 5.5% of gross domestic product in the United States – it can, at times, have best-in-class technology, heightened efficiency learned through trial and error, and sustainability practices that cannabis cultivators can apply to their operations.

“Commercial agriculture has been advancing for years with innovations in cultivation methods, design and equipment,” Gustafik said.

If you’re looking to improve your grow operation, it would be a smart move to capitalize on the experience and innovations developed in traditional agriculture, particularly in the organic herb market. These farmers have gained efficiencies by using:

7. Be Aware That Particle Size Matters in Extraction

A number of factors can influence extraction quality, such as the temperature and pressure used in the process, as well as the time and flow rate.

But particle size – or the size of the product put into the extraction system – can also make a difference, said Markus Roggen, vice president of extraction at OutCo, a California cultivation and extraction company.

In short, the smaller or finer a cannabis flower, the better, because it flows more smoothly through the extraction machine and results in a preferred product. For that reason, it’s good to mill your flower before putting it into the extraction machine. “Particle size is really important in extraction, and it also helps with packing,” Roggen added.

8. Take a Chance on Microdosing

Microdosing can be a powerful tool for edibles makers that want to tap a new and growing customer demographic, according to Jordan Tishler, president and chief medical officer at Inhale MD, a Boston medical practice specializing in cannabis therapeutics.

Microdosing is exactly what it sounds like: Consumers seeking the hard-to-define “wellness” benefits ingest relatively small amounts of infused cannabis products containing, say, 1-2 milligrams of THC as opposed to the more common industry standard of 10 milligrams.

These consumers are a burgeoning customer base for the cannabis industry and often include highly educated and wealthy purchasers. They are looking mostly for reliability in their infused products and usually are happy with one of the primary side benefits of microdoses: They don’t come with unwanted side-effects such as intoxication or extra calories from, say, brownies or chocolates.

Daily microdose use, Tishler noted, can lead to daily consumption and potentially bigger sales figures for companies willing to explore this new niche.

9. Be Organized in Planning Your Exit

If you’re the owner or top executive of a marijuana business, leaving the company isn’t just an emotional decision. It’s also a strategic challenge. If done incorrectly, you could leave potential successors and employees in a tough spot, said Darren Weiss, general counsel for Maryland-based Verano Brands, a multi-state cannabis operator and manufacturer of infused products.

The foundation to a good exit is recognizing the different types of strategies – including selling to a bigger company or passing the company on to a family member or friend – and identifying which one is best for you and the company. You want your company to continue to thrive.

Another key factor is being well organized so your business is attractive to potential suitors. What buyer, for example, wouldn’t be deterred by a company’s inability to provide documents – articles of organization, financials, shareholder agreements, etc. – or other information in a timely and organized fashion?

Owners seeking an exit should also seek to maximize the company’s value, which Weiss said is simply done by increasing earnings and reducing risks. Ways to increase earnings include cutting discretionary expenses, systematizing business practices, instituting employee incentive programs and reducing owner compensation. Ways to reduce risk include making sure key employees stay on after you leave so that the company’s management remains stable.

Whether you’re considering the Canadian market or simply looking for new ideas or metrics to apply to your business, you should watch the goings-on as the nation legalizes recreational cannabis this summer. Some key areas to consider, according to Miles Light, founding partner of Marijuana Policy Group (MPG), a Colorado firm that provides analysis, investment and policy advice to private and government clients: