Last week, more than 30 cannabis business leaders from across the country joined several influential lawmakers in the nation’s capital to call on Congress to change federal laws hampering the development of the marijuana industry.

The two days of lobbying, hosted by the National Cannabis Industry Association, focused primarily on reforming Section 280E of the tax code, improving access to banking services and reconciling the conflict between state and federal law – three policy reforms necessary for the industry to become fully sustainable in the years ahead.

This activity allowed cannabis professionals to put the biggest MMJ business issues in front of hundreds of decision-makers on Capitol Hill – likely the only place where these issues will be resolved.

But you don’t have to travel all the way to Washington DC to support reform of the very laws you struggle with every day as a business owner.

Laws don’t change themselves. The only path toward parity for the cannabis industry and a harmonization of state and federal law involves building relationships with elected officials. Every cannabis businessperson should know who represents them at a federal, state and local level.

Phone calls, letters, e-mails and especially in-person meetings with elected representatives and their staff members are very effective ways to raise awareness of the issues affecting your business and to build support for reform.

Believe it or not, donating money to key candidates can also be a big help. Support the elected officials who are behind our industry. Make contributions to their campaign committees and show up to their fundraisers, town hall meetings and other functions to talk about the issues affecting your business. It’s important that elected officials hear the same message from as many constituents as possible.

When meeting with federal lawmakers, one of the most common questions we get is, “how many jobs do you represent?” Elected officials deal with myriad requests from almost every industry and interest area on a daily basis. They must constantly calculate the political benefits (or consequences) of prioritizing one issue over another. The more jobs – and therefore constituents – our advocates represent, the easier it is to get the ear of those who have the power to affect positive change for the industry. This applies to advocacy at every level of government, from your local zoning board to the United States Congress.

Not only does the industry’s message carry much further when we leverage our resources and work together, but it simply makes good economic sense. Effective advocacy, especially at the federal level, is probably too costly for your business to afford on its own – but it is easily done if you combine resources with other businesses that share a common goal.

Don’t be afraid to partner with your competitors when work needs to be done at the local, state or national level, as together you represent a far more powerful constituency than alone.

It’s especially important for “retail” cannabis providers to get to know their neighbors and engage with their communities. It’s one thing to go into City Hall and tell policymakers why you have a right to stay open, but it’s a whole lot better to do so with the vocal support of other business and community leaders.

Making friends with you neighboring businesses is usually not difficult. Find out about local community projects in your area and get involved. Whether you’re participating in food drives, helping to clean up a neighborhood park or donating to major a redevelopment project, this community engagement will win friends and supporters much faster than staying isolated. You might just need their support in a fight with the city, county or federal government.

#4. Turn your patients and customers into advocates

Collectively, cannabis-related businesses across the country are in constant contact with hundreds of thousands – if not millions – of customers who are also voters. Your e-mail contact list, patients and customers have the potential to become an army of activists to make calls to elected officials and organize for change.

Consider sending a weekly political action alert to your email list or incentivizing your patients to make a phone call to Congress.

One of the biggest challenges to legitimization of the cannabis industry is public perception and negative stereotypes. All too often, industry operators perpetuate this negative image rather than work to overcome it.

Advertising that objectifies women, plays to the “thug life” or “stoner” culture, or in any way portrays your business as anything other than a professional operation hurts your bottom line and ultimately drags the industry down. Here’s a good rule of thumb: Don’t release marketing materials you wouldn’t want your mother to see.

Aaron Smith is executive director of the National Cannabis Industry Association, a trade organization that works to defend and advance the industry on a national stage. 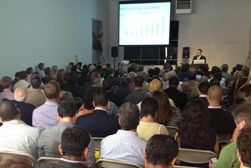