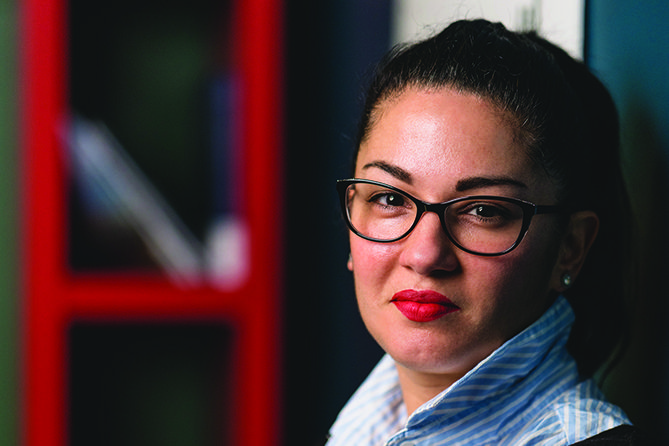 Having a diverse workforce – combining different nationalities, gender, religious backgrounds and more – is a business strategy for Giadha Aguirre de Carcer, the founder and CEO of New Frontier Data.

A wide mix of backgrounds and language skills – from Africa, Asia, Latin America and elsewhere – allows the marijuana data-analytics company to better understand the inner workings of global cannabis markets, according to de Carcer. That includes the mindset of cannabis users here and abroad, potentially giving the Washington DC firm a leg up on rivals.

Thanks to their diverse backgrounds, de Carcer noted, employees are better positioned to grasp how religion, politics and other factors can influence MJ demand – especially in overseas markets such as Latin America, where New Frontier Data plans to expand its market-analysis activities.

“Consumers, both medical and adult use, do not have a profile. They cross age, gender, ethnicity, (global) location and sexual orientation,” de Carcer said. “If you have a team of all-white men between 20 and 40 years old, you may not have it in you to understand what an African-American woman of 60 may want from your product or your services.”

As the company has grown, de Carcer has kept diversity top of mind:

“We cover the globe as far as locations,” said de Carcer, who was born in Italy and raised in France and Spain. “I’m a female, and I’m an immigrant. I’m half-Cuban and half-Italian.”

Also, their ages span from early 20s to early 60s.

“I can’t say this enough: You need diversity in your team,” de Carcer said. “Talk about thinking outside of the box: Nobody knows there is a box.”

A Boon to Business

In fact, workforce diversity has helped the company’s own business endeavors and areas of focus. A few years ago, New Frontier Data began exploring the possibility of analyzing the hemp industry, and one of the company’s interns was from China.

“This little intern popped up and said, ‘China is the largest producer and exporter of hemp today,’” de Carcer recalled.

The intern was soon dispatched on a research project. Using his language skills and knowledge of the country, the young man – who is now a full-time New Frontier Data employee – researched the ins and outs of the Chinese hemp market. He combed through documents written in Chinese, for example, giving New Frontier Data a better understanding of the country’s hemp market.

Since then, the company has gone all-in with hemp. In February, New Frontier Data bought Hemp Business Journal for an undisclosed sum. The company’s foray into hemp is no doubt aimed at boosting New Frontier Data’s bottom line at a time of increasing competition among providers of data analytics in the cannabis industry.
When the Hemp Journal deal was announced, de Carcer said in a statement that adding hemp analysis to the company’s portfolio would offer new business opportunities – not just for analysis of the plant itself, but for its industrial uses, from bioplastics to personal-care products.

New Frontier Data also is turning to its internationally diverse workforce to better understand the social and political factors that can influence marijuana use. The information can potentially benefit the company’s clients angling to do business in international markets.

New Frontier Data recently hired a contractor who speaks fluent Spanish to serve as its Latin American specialist. The man was born in Italy and raised in Spain. He has traveled throughout Latin America for the past 15 years, de Carcer said.

The contractor’s background and language skills allow him to “ask for information in places … they speak the same language,” de Carcer said, adding, “The cultures are nuanced.”

As an example, she pointed to Mexico and Colombia. “The way you should approach business in Mexico is different from how you’d do so in Colombia. Religion is a main driver (in Mexico) and could have an impact. It’s a very strong variable,” she said. The proliferation of Catholicism, for example, may influence Mexican consumers to be less eager users of cannabis.

In Colombia’s case, de Carcer pointed to the country’s history of powerful drug cartels, a factor that could influence Colombians’ attitude toward marijuana today.

“Cartels and concerns about safety could trump religion and may be a main driver,” de Carcer said.