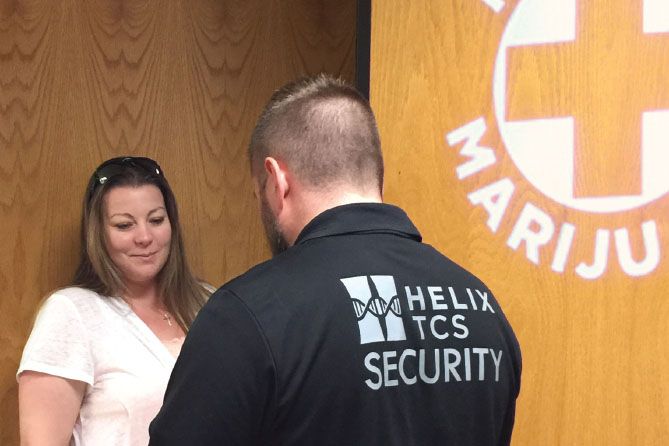 To bolster security, MJ retailers can use everything from motion sensors to ‘mantraps’ and panic buttons

A rash of armed robberies targeting dispensaries and recreational marijuana shops in several states underscores why business owners must diligently safeguard their employees, products and equipment – even if they already comply with heavy security regulations.

Last June, two armed men stormed a cannabis store in Aurora, Colorado, shooting and killing the security guard, a former Marine. Days later, a guard at a marijuana business in San Bernadino, California, was shot in the face and wounded. Robbers have also raided dispensaries and rec stores in many other states, most of which have stringent security rules in place for marijuana retailers.

Blame it on the nature of the cannabis business.

That’s not all: Stolen equipment such as lighting can be sold, and pilfered plants can generate money.

While there’s no way to fully safeguard against crime, owners of retail stores can take some extra steps beyond state requirements to lower the chance of robberies and burglaries and help keep their employees safe as well.

Below are some suggestions from security experts and business owners.

Combining alarms with an electronic keypad or electronic card access control for the door and high-resolution surveillance cameras is a solid strategy for deterring crime.

“These are the three essentials in terms of electronic monitoring,” said Siciliano, adding that a retail operation can install such a system for less than $10,000.

“Our security cameras allow us to see who may have broken into the facility so that we can give that information to law enforcement to follow up on,” he said. “And if we see any suspicious people outside and we have a guard on the premise, he can go outside immediately and investigate what’s going on.”

Canna Security continually monitors the cameras the firm sells to a client and then installs.

Noah Stokes, founder and president of CannaGuard Security in Portland, Oregon, recommends installing a monitor where customers check in so that potential thieves scouting a store ahead of time will see a high-resolution recording of themselves.

“The chances of them doing something are drastically reduced when they know you have a good shot of their face,” said Stokes.

PureLife Alternative Wellness Center, a medical cannabis collective in Los Angeles, has 28 cameras scattered throughout its facility, including outside and on the roof.

“We have cameras all over the place,” said Yamileth Bolanos, PureLife’s president and founder.

CannaGuard Security’s Stokes recommends having redundant internet-based, or “cloud-based,” storage of the video recordings in tandem with on-site cameras. The cloud-based cameras can act as a backup if a crook steals the on-site system during a robbery.

At Colorado Best Budz, a recreational and MMJ shop in Pueblo, Colorado, security cameras can be monitored remotely via cell phone from outside the store.

“We can look at our phones to see if someone is in the store,” said Tommy Giodone, the store’s owner.

PureLife, meanwhile, has motion sensors scattered inside the premises. They’re activated along with the alarm system once the facilities close for the night.

Stationed by the main door, a guard typically checks in customers and examines their patient cards, doctor’s certificates or identity cards.

The guards, hired out by private security firms, often have military or law-enforcement backgrounds.

Some cannabis retailers employ armed guards, a controversial approach that has its fair share of detractors. Those who support such strategies say it’s the ultimate way to protect a storefront.

Grant Whitus, chief operating officer of Helix TCS, a security firm based in the Denver metro area, said his company’s guards are all “drug free,” adding that marijuana use and guns “don’t mix.”

Denver industry officials said the local going rate for an armed security guard is $22-$23 an hour.

But Stokes of CannaGuard Security in Portland said an armed guard who is “tactically trained” in military or police procedures is pricier – more like $28-$32 an hour.

Having a guard on at night after business hours also is an option. Most break-ins occur after hours. Whitus of Helix TCS said having day and night guards has proved “100% successful” for clients.

Helix TCS also offers “night patrols,” where a guard driving a car will check on a storefront every 30-60 minutes. The price: $8-$11 an hour, depending on a business’ size.

“That’s a very efficient way for people to have their businesses checked on at night,” Whitus said.

Guards might not be the best solution for every retailer. Giodone of Best Budz has had negative experiences with security guards, noting they often chatted on their mobile phones or had their back to the front door.

He also said a guard packing a gun didn’t sit well with customers. “The clientele were very, very uncomfortable,” he said.

His solution: Add more cameras, have extra employees on the floor during busy times and train staff to be vigilant.

“You’ve just got to teach employees what to look for and be attentive,” Giodone said.

Colorado Best Budz also has panic buttons deployed throughout the building, including in the grow room and offices. Employees can push a button in an emergency, and the system then rings through to the police.

Instead of paying an on-site guard, Stokes of CannaGuard Security suggested retailers can turn to an outside company to continuously monitor security cameras.

“They can see that somebody is robbing a facility and call the police or a guard company to the scene while describing the number of people, their vehicle information and if they are still there or have left already,” he said.

Such a system also allows the person monitoring the cameras to call over an outside speaker at the store to anybody prowling near the building, a move that can scare off would-be thieves before they ever get in or do damage.

Given the lack of banking options, most cannabis businesses must transport thousands or tens of thousands of dollars to a location for safe keeping.

Experts say marijuana retailers should avoid moving the cash themselves, as it could create a bigger target on a company’s back.

“You should hire a security company to transport money,” said PureLife’s Bolanos. “Don’t go out with a lot of cash by yourself.”

CannaGuard Security, for example, operates a fleet of armored cars manned by two guards, one driving the vehicle and the other inside. The vehicles, manufactured by Mercedes-Benz, are outfitted with GPS tracking and cameras pointed inside and outside.

“We don’t keep much cash in the drawers,” said Best Budz’s Giodone. “We’re keeping the bare minimum, just like a convenience store.”

At Best Budz, cash is stored inside a safe enclosed in a concrete vault. The safe is emptied frequently, Giodone said.

“To protect yourself and your assets, it’s wise to move your cash daily or weekly from off the premises,” said Siciliano, who recommends every business keep cash and product in a safe.

Best Budz, meanwhile, displays products during store hours in small containers. The remaining products are stored behind the counter and kept under lock and key.

7. Be on the Lookout for Inside Jobs

CannaGuard Security’s Stokes said the most likely threat against retail shops will be someone from inside the business – namely an employee.

“They know when to hit you, where the cameras are located, and how the security infrastructure operates,” he said.

One solution: Install a system that can automatically notify the owner, a guard company or trusted employees if the alarm is disarmed outside of normal hours, a certain highly secure room is accessed even if the alarm is deactivated, or on-site camera system is tampered with. An employee could be the culprit.

A mantrap, or security room, is a space customers enter from the outside through the store’s front door. A locked door at the room’s opposite end leads inside to the store. A guard is stationed inside the room and checks customers into the store after examining their documentation.

“If everything is good he allows them to move into that area,” said Whitus of Helix TCS.

“They don’t have to be very large,” Whitus said of the mantrap. “We just recommend they’re large enough so the customer can stay in there with a security guard until they can be vetted.”

Beware, though: It’s possible a mantrap will create an uncomfortable atmosphere for some patients and customers, PureLife’s Bolanos said.

“We don’t want them to feel something is wrong or dangerous,” she said.