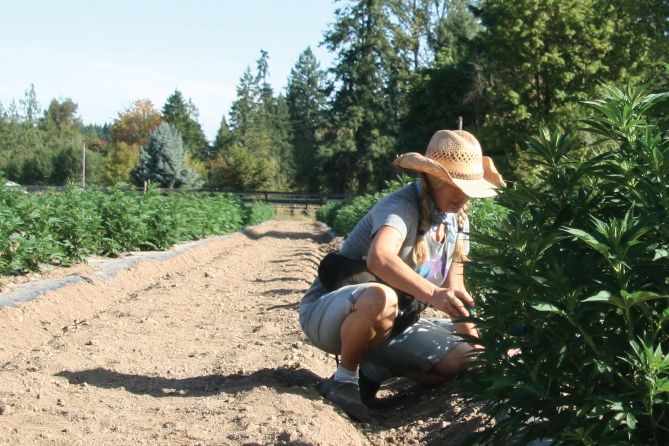 On the surface, it might seem like a no-brainer for a farmer who is growing hemp to cross over to marijuana, given the growing number of medical and recreational MJ products on the market.

Hemp, for starters, is a cousin of marijuana. It’s a distinct variety of the plant species cannabis sativa L that is frequently confused with marijuana. So there must not be much difference when it comes to growing the two plants … right?

Not quite. It’s tough enough navigating the voluminous regulations governing the cultivation of medical or recreational cannabis – to say nothing of understanding the sometimes stark differences between how the two plants are grown.

But tackling the transition is possible.

If a farmer is growing hemp for CBD – versus fiber or seed – there’s not as steep a learning curve to begin growing marijuana. But be aware that the regulations governing each crop are vastly different.

“They’re two different components and are treated differently under the law,” said Michael Bronstein, co-founder of the American Trade Association for Cannabis and Hemp. “You can’t just move one license over to another. There are legal barriers in certain states. Many states have industrial hemp pilot programs. Some have MMJ laws and others do not.”

More than 30 states allow hemp cultivation under provisions spelled out in the federal 2014 Farm Bill. The law authorized production for research purposes and select pilot programs. A handful of states allow farmers to grow both hemp and marijuana, including California, Washington and Maine.

The laws and regulations for growing cannabis also vary greatly by state – and even municipality. Some towns, for example, may ban recreational or medical cannabis in a state where the hemp plant is legal.

“Follow the regulatory guidelines that have been published,” Bronstein said. “Follow the application guidelines, and get yourself familiar with the licensing process in general.”

Similarly, be aware that some areas have regulations that cross over between cannabis and hemp.

In Oregon, for example, hemp and marijuana can be grown on the same property as long as there are separate licenses. But in Pueblo County, in southern Colorado, a hemp crop must be at least 5 miles from a farm that grows marijuana for its THC content, given concerns that the two plants may cross-pollinate.

Finally, be aware that finding banking services can be a bigger issue in cannabis than it is in hemp.

“Make sure you have access to capital. You’re talking about millions of dollars. There’s no access to banking, so it has to be privately raised,” Bronstein said of cannabis.

The ease of transitioning from growing hemp to marijuana depends largely on what your legacy hemp crop is being produced for. If the crop is being cultivated for fiber or seed, there are few similarities between the way the two plants are cultivated. Unlike cannabis, such hemp plants don’t need fertilizer or pesticides and are grown outdoors. Sunlight and water are generally sufficient.

But if you’re growing hemp for CBD, the crops are virtually identical – and should be nurtured in the same way, said Kyle Wagner, co-founder of Queen Bee Bliss, a Sherwood, Oregon-based hemp farm.

Wagner, who relocated from Colorado to Oregon to start the business, studied and trained in Colorado to go into the recreational marijuana industry. But she soon determined she didn’t want to deal with all the regulatory complexities. So she opted to become a hemp farmer. Still, Wagner is also growing several medical marijuana plants; she battled cancer twice and has an MMJ card.

Given the similarity between marijuana and hemp grown for CBD, Wagner is frustrated by the misinformation that surrounds the latter. For example, it’s widely believed that all hemp plants are male and marijuana plants are female. But Wagner spends a lot of time pulling any male plants she finds out of her hemp crop so they can’t pollinate the females.

When her hemp crop reaches its pre-flowering stage, Wagner examines each non-clone plant – not all seeds are feminized, so the ones grown from seed need to be sexed – to ensure there are no males lurking in the rows. If there are, she pulls and destroys them.

“I stop, drop to my knees and look through a magnifying glass,” she said. “With marijuana, it’s possible to find far more feminized seeds than it is with hemp, and thus with hemp we have to sex out the males once they start the pre-flower phase.

“If you wait too long to sex the plants, you can see the boys’ parts … with the naked eye,” she added. “But I like to get them the heck out of there long before that so there’s no chance that the pollen will disperse. Hence, the magnifying glass, which I would use on marijuana plants, too.”

According to Wagner, both plants can be started from seeds or by cloning the mother plants. Germinating plants should be kept in a greenhouse until they’re about 12 inches tall and can then be transplanted to the field.

Wagner puts her hemp plants into planting cups with FoxFarm’s Ocean Forest, a potting soil that’s considered the standard bearer for well-rounded soil, before planting them in the ground. She said the same can be done for cannabis.

As with hemp grown for CBD, high-quality soil is critical to ensure a healthy marijuana crop, Wagner said.

Good soil is dark brown in color, compacts when you squeeze it and easily breaks apart again with a small amount of pressure. The soil should be rich in organic matter with a slightly acidic pH of 5.5 to 7. Cannabis likes a slightly acidic environment at the roots, which is what makes it thrive outdoors. Soil also should be well-drained because waterlogged cannabis can lead to bud rot.

Wagner’s hemp property previously was a horse farm, so she and her crew spread stored manure and slow-release calcitic lime across her field and brought in a special tractor to turn her rows into raised beds with 3 feet between them.

Wagner dug holes a foot deep and augmented the soil with kelp, blood meal and garden-grade lime before dropping the transplants into the ground – the same technique, she said, that can applied to cannabis.

Before transplanting her hemp crop, she picked her favorite plants and put them in the greenhouse so she can clone the mothers for future crops – again, the same can be done for marijuana.

In addition to such similarities, Wagner said a benefit of growing marijuana is the plant effectively telegraphs its condition. So it’s easier to nurture the plants.

“The great thing about cannabis is that it tells you what it needs,” she said. “What kind of bugs, whether it’s dehydrated – it shows itself amazingly readily.”