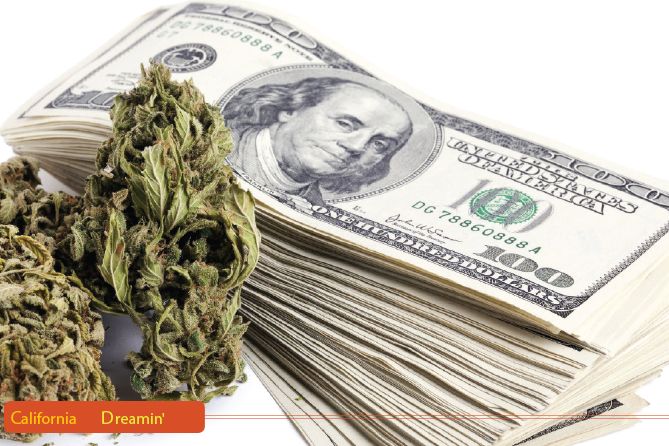 Thousands of longtime medical marijuana business owners in California are about to undergo a major jolt as the state moves from a largely unregulated market to one governed by a new comprehensive regulatory framework.

These businesses have operated for years in an unofficial gray market in which regulatory standards were lax or nonexistent in places such as Los Angeles. Regulators were few and far between. And many MMJ company owners did not pay taxes or keep meticulous records of their business dealings.

That’s set to change – and many businesses are unlikely to survive the transition unless they take all the steps necessary to comply with the new regulatory regimen.

“The attrition rate will be higher in California than in most states – you’ll get 70%-80% attrition,” said Avis Bulbulyan, CEO of Siva Enterprises, an L.A.-based marijuana consultancy. “Many of the operators have been operating with blinders on for the last decade and not really understanding what the rest of the country is going through.”

The changes will affect growers, infused product makers and retailers differently. Below are tips and advice for how existing MMJ business owners can tackle the transition.

Recordkeeping will be indispensable in a regulated market.

The war on drugs left its mark on California growers, who remain wary of federal crackdowns and for whom transparency represents risk, not compliance. But cultivators who want to survive will have to adapt to the new market reality.

For growers, this means tracking and recording how many plants they are cultivating and the stage they’re in – seedling, vegetative or flowering.

“This shift in culture is one of the most challenging and most important ones as well,” said Hezekiah Allen, executive director of the California Growers Association.

Marketing will be important to build a brand.

Because growers previously were underground, they couldn’t build brands, which help bring value to a company, Allen said.

“Adding value is key to survival,” he added. “So the ability to build brands, that’s one of the real opportunities this transparency is bringing to the marketplace.”

To build a brand, Allen advised, growers can hire a brand consultant or attend workshops sponsored by industry organizations across the state, including his.

Data crunching will be crucial to improve sales and other metrics.

Good recordkeeping and seed-to-sale tracking will provide a trove of data that can help marijuana growers boost their performance.

“Growers are going to need data on what happens to their product if they’re going to be able to cultivate as efficiently as possible. They’ll need to start asking those questions,” Allen said.

“Producers are going to be able to track their product all the way through the supply chain now,” he added. “That means that if it’s being sold on the top shelf, the grower should be seeing some of that premium at the wholesale level.”

Prepare for a major change in the regulatory landscape that could result in fewer edibles being allowed for sale.

While edibles regulations have yet to be finalized, Julianna Carella – the CEO of Auntie Dolores’ edibles company in Oakland, California – believes regulators will automatically disqualify some products.

As a result, Carella anticipates having to reduce the number of products her firm will manufacture. She also will put greater focus on her CBD products, because those face fewer constraints and therefore lower costs.

Carella also believes regulators could ban perishable items from being infused – possibly items that contain caffeine and other products.

While it’s hard to anticipate what rules on edibles may or may not allow, edibles makers should at least be aware that they will likely have to adjust and be ready to do so when the time comes. “Many companies will have to adjust their offerings because not all of them will be allowed,” Carella noted.

Determine which products will pass muster with regulators – and which will not.

Carella anticipates having to remove two-thirds of the items on her menu.

“Now is the time to figure out which of your products are going to be compliant,” advised Carella. “Many companies will have to go back to the drawing board to create products that are compliant.”

For example, the current edibles market includes products that may have a few hundred milligrams of THC. But new state regulations may prohibit such highly potent edibles, forcing manufacturers to revamp their product lines.

Be ready to deploy capital and adjust when regulations become clear.

When the regulations are finalized, business owners will need to be able to act quickly to adjust, and they should expect to shell out significant capital, potentially on equipment and appliances that produce products in compliance with the new rules.

New packaging, labeling and employees could suck up money, too.

Carella also expects costs to go up, especially with testing. She estimates that samples that generally cost her $80 to test will cost about $800 to test in the new market.

Determine whether you want to co-locate your medical and adult-use operations in one store – or two distinct locations.

Under a bill approved by the California Legislature this year, retail business owners will be allowed to operate both medical and recreational stores. They will also be allowed to have adult-use and medical activities licensed on the same property – provided they obtain two separate licenses and follow all the compliance requirements for each track.

Branding. Van Roo says he plans to have his medical and recreational stores at different locations because the medical brand is already so well established, and he wants to develop a new brand for the rec business.

“We want our medical store to retain a medical, clinical feel versus an adult-use environment, which is a much different scenario,” Van Roo said. “One’s more tailored to creating a pathway for medical solutions, while the other is adult use.”

Know you’ll be targeting two different demographics if you enter both the medical and adult-use markets.

Van Roo said most of his medical patients are 50 and older and very distinct from the rec customers he wants to woo to his recreational store.

“The adult-use shop will be an attempt to capture a whole different market that has been frequenting the medical shops and may be done going through the headache of getting a medical recommendation,” he said.

Creating a rec brand from scratch, Van Roo said, requires “a lot of bouncing ideas off of creative directors and marketing pros,” as well as focus groups. “It’s a long-term process.”

Make sure you have enough capital to survive what could be a very long transition period.

That’s the advice of Cary Carrigan, executive director of the Alaska Marijuana Industry Association. His state is still dealing with the rollout of a new rec market, and there have been plenty of growing pains.

“Part of what we’re going up against here is that people go and find a place to do their business and then they sit on that lease for more than a year, but still haven’t been able to open their doors,” Carrigan said.

Why? Because government regulators hadn’t yet acted on their business license applications, leaving the owners to keep paying rent without any revenue. He knows growers who have spent well over $1 million in rent and other expenses and are still waiting for their licenses to be approved.

“These prospective businesses spend a lot of money and time, and it’s broken people,” Carrigan said.

Start off small and slow.

Avoid starting off too big or growing too quickly, Carrigan advised, otherwise you’ll incur more costs than anticipated while lacking the experience to bring in sales.

“Many people who are successful now started small. They started with small cultivations and didn’t overextend themselves,” Carrigan said. “They just anticipated being out of money for a certain amount of time, and living modestly.”