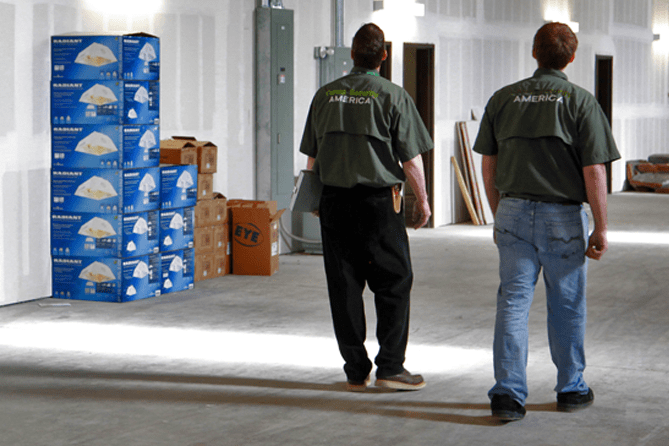 WHEN COLORADO WAS crafting regulations to govern its medical marijuana program in 2009, the state needed guidance on what types of security protocols dispensaries should have in place. State officials called on Dan Williams, who at the time was designing security systems and writing security standards for restaurants and had previously provided similar services for other mainstream businesses such as car dealerships.

After helping the state, Williams saw a prime business opportunity. Surely companies in the burgeoning medical cannabis industry would need the help of a security firm to implement the new regulations, he thought. So Williams launched Canna Security America (CSA) to cater specifically to the marijuana industry in Colorado.

Although he was optimistic, Williams didn’t think the industry or his company would become as large as they are today.

“We thought it’d only be Colorado,” he said. “We figured the market would become saturated (with security companies) and we’d move on to other things.”

Six years since its launch, CSA has accounts in 12 states, employs 150 to 200 people at any given time and provides security services to more than 400 dispensaries, recreational shops, testing labs and cultivation sites, according to Williams, who also acts as a consultant to states considering medical or recreational legalization. What’s more, the firm also provides security services to numerous ancillary companies in the cannabis space.

Canna Security America started with alarm, closed-circuit camera and controlled-entry systems but earlier this year branched out into the realm of physical security – armed guards and armored vehicles to transport cash and other valuable items. CSA plans to go public in July in a bid to raise capital for vehicles, personnel and systems improvements.

Here are some of the key strategies Williams employed to build a successful ancillary company in the cannabis industry.

Get – and Stay – Heavily Involved in Politics

After he helped Colorado write its security regulations for medical cannabis dispensaries, Williams wanted to stay involved in politics – both because he enjoyed it but also because he felt it could help his business. For the past several years, he’s worked as a pro-bono consultant to lawmakers in states attempting to craft cannabis laws, and he has helped with lobbying efforts in Washington DC.

Staying involved politically is particularly important for a business like CSA, Williams said, because most regulators developing rules around this controversial and new industry don’t know the first thing about securing a cannabis business, even though security is often top-of-mind to them.

Helping lawmakers and regulators understand that security can be comprehensive without forcing business owners to invest their life savings in just one aspect of a security system certainly helps his company – but it also benefits the industry as a whole.

Just as importantly, staying politically active legitimizes the cannabis space and helps Williams understand the laws in other states, which in turn helps the company expand into new markets.

“We understand who’s involved in the regulatory process,” Williams said. “If there’s a question about the regulations we can call that person directly. That happens quite a bit in Washington (State), for instance.”

He added that most lawmakers not only want legalization to work, they also want to understand how it will work. “Being from Colorado has helped us show that it has been working for years, and that makes (legislators) a lot more comfortable,” he said.

Williams also said it’s important to stay apprised of any new laws or regulations – and there are a lot of new laws and regulations to understand – so he can provide timely information to existing and prospective customers.

But it’s not just geographic expansion on which CSA is focused. Earlier this year, the company branched out to the physical security market, creating an offshoot called The Cloverton Group to provide armed security, armored vehicles to transport cash, risk assessment and background checks.

Williams brought on Josh Ray – a former deputy sheriff and SWAT team member – as director of security for the new venture, helping to set the company apart from competitors.

“There are a lot of companies going out there and showing up on time, but not all of them are meeting the needs of this industry,” Williams said. “I hired Josh, and he’s already written an 80-page book on the uniqueness of the cannabis industry and how security concerns need to be addressed.”

Canna Security America also expects to go public this month after a year of planning to raise much-needed capital to fund its expansion into the physical security market. It will buy Mercedes-Benz Sprinter vans, armor them and equip the vehicles with advanced communications technology that relays GPS data back to the company’s headquarters in Denver. Guards also will wear body cameras to prove they’re acting in accordance with state and local laws, should a question ever arise.

“The idea is that every point from pickup to drop off is recorded in high definition and stored on servers so if federal agents want to conduct an audit, we can literally pull up the transaction on a monitor,” Williams said. “Everything is going to be recorded from start to finish to ensure traceability.”

That type of technical planning and foresight is paramount in an industry that changes as rapidly and is as volatile as the cannabis space. With new states expected to legalize medical and recreational marijuana in coming years, staying ahead is key to a company’s survival, Williams said.

CSA has a dedicated researcher who stays on top of each state’s new cannabis security laws so the company can provide insight and information to clients and potential customers. While knowing every aspect of every law in every state is nearly impossible, it’s something CSA strives for, Williams said.

“It’s important to really do that research and do it daily before you’re asked about it,” he said. “Each state really is working in its own bubble, so that becomes the biggest priority, to understand what’s happening in each state.”

Believe in What You’re Doing

Working in the cannabis industry isn’t easy. Long hours, ever-changing regulations and the constant threat of government intervention can make for some sleepless nights, so those seeking to enter the space need to be all-in, Williams said.

Even ancillary companies need to be sure it’s something about which they’re passionate, or it will take a toll on them eventually.

“If you don’t believe in cannabis and the benefits of it at all levels, don’t get into the industry,” he said. “Unless you have that belief that it will work and it’s a benefit, it’s hard to maintain the energy you need to make it a success.”