The liberalization of marijuana laws across the United States has led to increased tax revenue at the state and local level, but the amount generated so far is just the tip of the iceberg.

The financial site NerdWallet projects that marijuana sales would lead to more than $3 billion a year in state and local taxes if cannabis is legalized across the country. The figures are based on a previous estimate by a Harvard University economist of $14 billion in annual sales if the entire nation legalizes marijuana.

Topping the list – not surprisingly – is California, which could rake in almost $520 million a year in taxes if it legalizes marijuana sales, according to NerdWallet.

At the low end of the spectrum is North Dakota, which would generate an estimated $4 million in state and local tax revenue.

The estimates are very thorough, complete with a chart that includes projections and other data – such as the percentage of the population over the age of 25 that has smoked marijuana in the past month – for each state.

The estimates assume an average 15% excise tax and include state-specific sales tax rates. 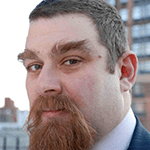