A rivalry has emerged between the two largest trade associations in the cannabis industry.

On one side, the legacy group, the National Cannabis Industry Association (NCIA), counts more than 1,000 members – this after losing roughly 200 since the COVID-19 pandemic began in early 2000 as well as dropping its annual trade show.

The NCIA, which was founded in 2010, calls itself the “oldest” and “most inclusive” cannabis trade association. Its members include small and medium-sized businesses.

“We’re able to tell Congress that we represent tens of thousands of employees from across the country, not just the top 50 businesses that make up groups like USCC, or these others that come and go and rebrand,” noted Aaron Smith, the NCIA’s executive director.

Smith was referring to the group on the other side, the U.S. Cannabis Council (USCC), which includes on its roster of around 50 members some of the biggest marijuana multistate operators in the country as well as large Canadian producers.

Launched last year, the USCC says it “combines the collective resources of many of the largest cannabis companies, prominent advocacy organizations and hundreds of thousands of individuals.”

The USCC’s board chair, Jessica Billingsley, was a founding member of the NCIA and served on the board for several years before joining the USCC.

“They (the NCIA) have this three-legged stool focus on a few different areas, including events and education.

“But I think (the USCC is) far more focused on bringing together the businesses who are working in cannabis today as a trade association, to advocate for the best interests of the industry as a whole.”

Both groups are focused on federal cannabis reform, targeting the same familiar sticking points that have existed for years: access to banking for the marijuana sector as well as reforming Section 280E of the federal tax code, which prevents cannabis companies from getting the same tax breaks and exemptions as mainstream businesses.

But a comparison of their membership appears to reflect the growing stratification of the nationwide cannabis industry.

Small, independent businesses currently make up the bulk of the more than 100,00 ancillary and plant-touching companies that comprise the U.S. marijuana industry.

All the while, larger, publicly traded MSOs continue to consolidate and expand, snatching up licenses in emerging markets and buying out struggling businesses in states suffering from oversupply and saturation.

There’s a “massive galvanization” among those big companies because they share the same self interests in the event of federal legalization, said Nic Easley, the CEO of Colorado-based 3C Cannabis Consulting.

“USCC is catering a lot more to the MSOs that have that mentality of, once free trade opens up, where’s mass production going to be?” he added.

“NCIA has a lot of the same goals but not based on any larger interests.”

Founded more than a decade ago, the NCIA has been the biggest trade association in the industry for years.

At one point, it was the main trade group and included annual conferences and trade shows as well as roughly 1,200 members.

That membership is hovering around 1,000 now, according to Smith.

“We’re not back to where we were pre-pandemic,” he said. “But we’re slowly getting there.”

The organization is still hosting its annual Lobby Days this month, when NCIA members will trek to Washington DC and meet with members of Congress.

But Smith said in-person events have struggled to regain their momentum since COVID-19 hit.

“We’re rethinking our whole event strategy,” he said. “It’s going to be more of a local approach and doing smaller events in multiple cities versus the trade show.”

The organization’s focus is more on representing the independent, little guys in the industry, according to Smith.

“We’re proud to be representing the boutique businesses and the smaller, medium-sized businesses that make up Main Street cannabis business in this country,” he added.

However, as the industry struggles, so too does its trade associations.

Smith pointed out that the economic pressures from inflation, overregulation and taxation that are hurting businesses are also affecting his organization.

Despite that, he said, the NCIA still has a broad membership base with enough members to garner some sway in Washington DC.

It’s not the first time Smith and the NCIA have faced rough sledding.

Both have come under fire previously. In 2018, for example, the NCIA experienced board resignations and the group was called ineffective.

The USCC formally launched in February 2021, after aligning the Cannabis Trade Federation and Marijuana Policy Project.

Board members from both organizations formed a committee to create the national trade association.

Khadijah Tribble was recently appointed as interim CEO of the USCC after Steven Hawkins abruptly departed last month without explanation from Hawkins or the group.

Hawkins’ departure also shed light on complaints by some that the USCC is too focused on corporate interests, with the Association for Cannabis Health Equity and Medicine (ACHEM) announcing its resignation from the USCC’s board of directors.

The USCC said Hawkins’ departure and ACHEM’s exit were unrelated.

The USCC doesn’t hold conferences, instead focusing on lobbying and advocacy efforts.

On that point, Avis Bulbulyan, a Los Angeles-based marijuana consultant, said he believes the USCC is more focused on its purpose as an organization.

“I see in them a lot more of a hyper focus on federal reform,” he added. “More strategic and a lot more pinpointed in their approach. NCIA is more of a broader, umbrella association.”

Billingsley said her organization tries its best to coordinate messages with NCIA.

“Where we overwhelmingly agree on different topics we try to present a unified voice,” she said.

Both groups are focused on the SAFE Banking Act and 280E reform.

“It’s the same two things that we’ve been talking about for over a decade,” Billingsley said.

For the NCIA, the immediate priority is the SAFE Banking Act.

“That’s the one policy change that we likely have the votes for in the Senate,” Smith said. “It affects the smaller businesses, the equity operators, those who don’t have access to private capital or deep pockets.”

“Just making sure that members of Congress hear from all of the issues that affect businesses in the industry,” Smith said.

He went on to add that 280E remains “very crippling” for the industry, noting how the NCIA is taking a different approach.

The group has worked unsuccessfully in the past to get 280E reform passed as a stand-alone piece of legislation.

“I really think that the key to getting 280E relief at this point is a broader bill like CAOA that deschedules (marijuana),” Smith said.

Unfortunately, he added, the industry doesn’t have the 60 votes in the Senate it needs for that right now.

Billingsley, for her part, said the USCC believes the expungement and equity provisions of legal and regulatory reform should go “hand-in-hand” with 280E and banking reform.

Amid growing criticism, NCIA chief Aaron Smith admits missteps and hopes to move the trade group in a new direction 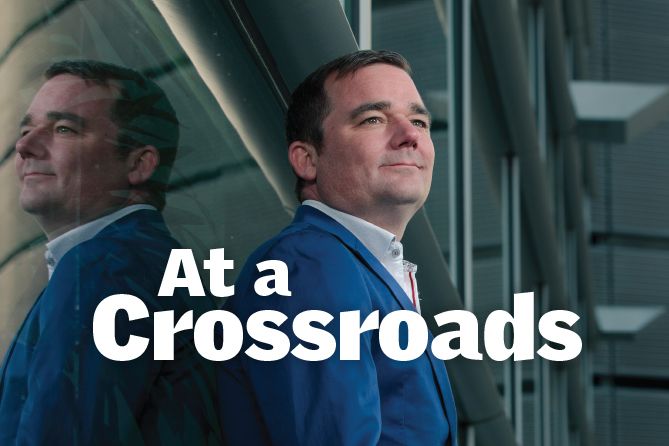