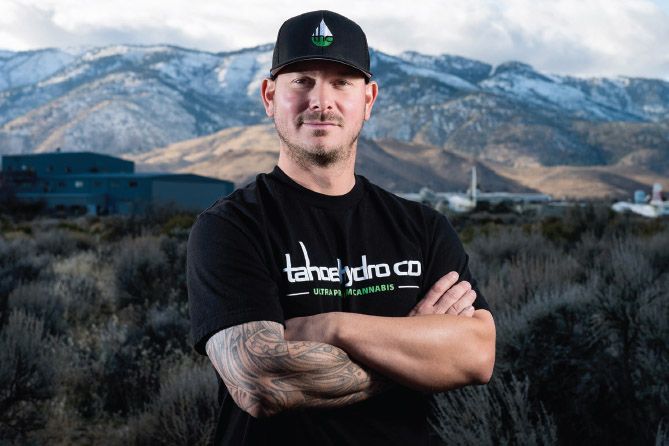 The co-founder and chief operating officer of the licensed cultivation company Tahoe Hydroponics in Carson City, Nevada, prefers to trim cannabis flower by hand rather than use machines. He also takes steps to ensure he doesn’t rush through the drying process, and he maintains strict standards for quality.

His methods are more costly than other options — automating his process could reduce his costs by half. But he’s seen results that show his approach is worth it.

In November, Tahoe Hydro scored a three-award sweep at the Jack Herer Cup in Las Vegas. The company won first place in the sativa, indica and hybrid flower categories.

“We are definitely spending more money than other folks, but I believe in that process and it shows in our product,” Bruno said. “I look at ourselves more as a microbrewery versus Bud Light.”

Through extensive trial and error, Bruno has found cutting down the entire marijuana plant at the base and hanging it to dry yields the best results.

Other cultivators might pre-trim their plants wet or break the plant into small sections to flash dry, a process that dries the plant in three to five days. According to Bruno, the sectioning process traps too much chlorophyll in the flower and makes the plant taste the same, no matter the strain.

“We do not believe in that in our process,” Bruno said. “We do not touch the plant like other groups do.”

He refers to hanging the entire plant as “vine curing,” which takes about 15 days to dry. The plant is hung in a room at 66-68 degrees with 50% humidity before it’s handed over to the trimmer. The plant experiences no pre-work until the final trimming stage.

Bruno believes this slower process on the front end creates a more explosive nose, or aroma, profile to the trimmed flower. The goal is to develop a “loud” enough aroma so the customer can distinguish the strain by smell alone.

The slower process on the front end also means he and his team don’t have to “burp” the buds, a time-intensive method where someone opens jars of trimmed flower as frequently as once an hour for several days, if not weeks, as part of the curing process.

In his 15 years in the industry, Bruno has seen all kinds of machines come about to accelerate the trimming process, including motorized scissors.

To Bruno, none have replaced the human hand. It’s difficult to automate a process that benefits from the care a person can take.

“Hand care is so important because we’re able to train the eye of our trimming crew,” he said. “We can dedicate how we want each flower to look.”

Bruno explains to his trimmers how the flower of each strain should appear.

“They know that the OG Kush is going to trim the way I want it to look,” he said. “They’re going to trim it a different way than they would Blue Dream.”

And the difference is clear. Bruno says he can walk into a dispensary or retail store and tell right away if the bud has been trimmed by machine or by hand.

“Each strain possesses its own profile, its own visual look that we’re after and the way a customer should see it,” he said, adding that with machines “you get a very symmetrical, rounded bud. Everything looks the same.”

That eliminates the uniqueness and beauty of each strain.

Plus, a machine can’t often catch all the leaves that are embedded in a flower. If the leaves aren’t extracted, it has a negative impact on flavor. To Bruno, a hand-trimmed flower offers a smoother, finer taste profile.

To ensure his trimmers’ cuts match his vision, Bruno has built in two layers of quality control.

His first piece of advice to new trimmers: Speed is their enemy. In his operation, trimmers get paid by the pound, so they’re pushing to produce as much as they can.

To keep trimmers from rushing, trimmed buds are submitted to a quality-control manager for visual inspection. The manager will either hand back individual buds for touching up or hand back the entire bin. It’s common for trimmers to have their buds rejected multiple times.

Bruno said people who have trimmed in other operations often become frustrated with Tahoe Hydro’s methods.

“In some respects, what we have found is that it’s better to take someone who has no experience than somebody that has experience,” he said. “Folks are either going to make it in our process or go somewhere else because of how tedious everything is.”

Once the first stage reaches completion, a second quality-control manager touches up the final buds again by hand before they’re packaged.

The other major expense comes in the space that hanging whole plants takes up. Bruno’s company has had to build a room almost half the size of the flower room to dry the plants. The employees don’t cram the plants together. That helps provide good, even airflow. The plants also are spaced out to avoid mold.

“It actually takes up quite a bit of space,” Bruno added.

So is it worth it?

“One hundred percent,” he said. “We believe in it. That’s what’s been separating us in the marketplace.”

Bruno admits his company spends more money by paying for hand-trimmed plant versus having someone operate a machine.

“However, we’re in a position where quality overrules timing,” he said.

Common practice dictates trimmers are paid a set amount per pound regardless of how much the cultivator produces. However, Tahoe Hydro adjusted its payment schedule for trimmers to a sliding scale based on daily production.

As a ballpark, the company’s average price for a pound of trimmed flower is $2,300 wholesale. With the sliding scale, Tahoe Hydro pays out about $135 per pound on average to a trimmer, or about 6% of the company’s wholesale price per pound.

An hourly worker running a trimming machine can produce far more pounds per hour than a hand-trimmer, a combination that is cheaper than Tahoe Hydro’s approach. The cost of the machine operator would be around 3% per pound, or possibly even lower. That would be half the cost, or less, that Tahoe Hydro incurs.

“On the business side of things, a lot of people would say it’s not worth it,” Bruno said, comparing hand-trimming to automation. “We are definitely spending more money than other folks, but I believe in that process and it shows in our product.”

Yet that model might not be sustainable for outdoor grows.

Bruno is also involved with greenhouse operations in California. Those companies look to produce 2,000-3,000 pounds a month. For that, they might be forced to use machines to trim flower.

Bruno’s ceiling for trimming by hand on an indoor grow operation is a total of about 600 pounds per month. Anything beyond that would require some rethinking.

Bruno, for his part, isn’t in a hurry to scale up his own operation.

“I’m not in this business to do mass production,” he said.