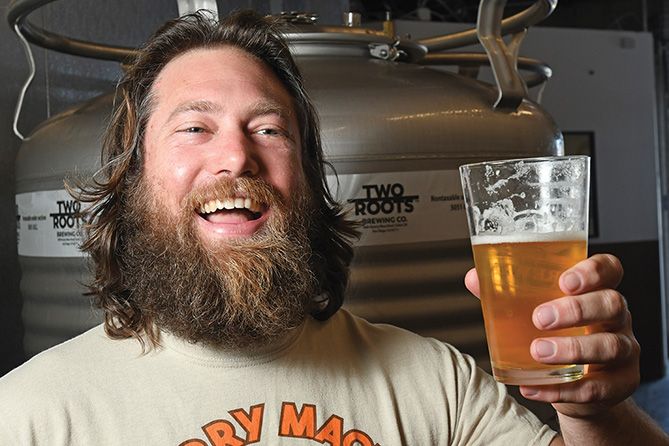 Convincing a regular beer drinker to choose a nonalcoholic, THC-infused ale over a traditional brew is no easy task. The same goes for a cannabis consumer who’s more comfortable with smoking, vaping or ingesting edibles than drinking an infused ale.

So, when San Diego-based Cannabiniers unveiled its CBD- and THC-infused craft beer under the Two Roots Brewing Co. label in August 2018, it immediately began an aggressive strategy to convert cannabis and beer enthusiasts away from old habits in favor of a new way to consume.

The company executed that strategy by:

Technology Behind the Beer

Two Roots offers a handful of different styles of canned craft beers—lager, blonde, wheat, stout and IPA—infused with 5 milligrams of THC. Its brewers make the beer in the typical manner, then de-alcoholize it before infusing it with cannabis. The beers are available at dispensaries in California and Nevada.

According to the company, the technology used to infuse the beer—nanoemulsion—breaks the cannabinoids into smaller particles. That speeds up the absorption process, evenly distributes the THC and CBD and helps to mimic the effect of drinking alcohol.

“Beer is a product that everyone is familiar and comfortable with, and as smoking begins to decline in popularity, (consumers) are looking for healthier experiences, ideally those that don’t carry social stigmas,” said Maikel van de Mortel, Cannabiniers’ executive vice president of marketing. “Two Roots can be consumed both discreetly and in social settings, which captures the interest of both the beer consumer and cannabis consumer.”

Rather than dissecting and segmenting target customers based on demographics, Van de Mortel prefers to view Two Roots’ core consumers as those who consider themselves “cannabis curious.”

He describes “cannabis curious” as people “who want to try cannabis but might be hesitant based on past experiences or the negative social stigmas they may be fearful about.”

Two Roots has identified that its customers favor craft beer, but they’re also seeking alternatives to the downsides of alcohol—think hangovers and extra calories.

According to Van de Mortel, market research and careful observation led his team to home in on an audience that’s health conscious and wants to consume an infused product while still meeting daily responsibilities and maintaining a balanced life.

“Consumers are looking for products and companies that hold these traits, and we ensure that all of our offerings match our ethos,” he said.

“We’re always looking to find engaging ways to connect with our consumer,” Van de Mortel said. “This allows consumers to taste our product and to personally sample.”

The company is aware that craft beer connoisseurs are interested in specific aspects of the drinking experience, including the mouthfeel, taste and ingredients, so getting samples to the consumers is important.

Aside from offering samples at events and conferences, Two Roots also created a “speakeasy” tasting room at Cannabiniers’ dispensary Las Vegas ReLeaf, allowing consumers to try the nonalcoholic, non-infused beer while they sit in the waiting room.

According to Van de Mortel, beverages have been met with some distrust and hesitation in the cannabis industry, so consumer education is essential.

The sampling sessions help with that by allowing Two Roots representatives to educate potential customers, budtenders and anyone else who is curious.

The goal: Convince those sampling the brews that Two Roots emulates the effects of alcohol.

“Instead of the alcohol negatives, we’ve replaced these with microdosed cannabis that allows for a quick and elevated experience,” Van de Mortel said. “We offer a more mindful, healthier option for the craft beer consumers who want to get away from its negative effects, as well as the current cannabis user.”

As Two Roots expands from Nevada and throughout California, Van de Mortel said each market comes with its own set of regulatory and compliance challenges—from packaging to distribution.

“Adhering to stringent standards is important to us, determining our path to integrate within each state vertically,” he said. “It has been a long but worthwhile process, and we couldn’t be more excited to expand throughout California and bring our broader beverage portfolio to market.”