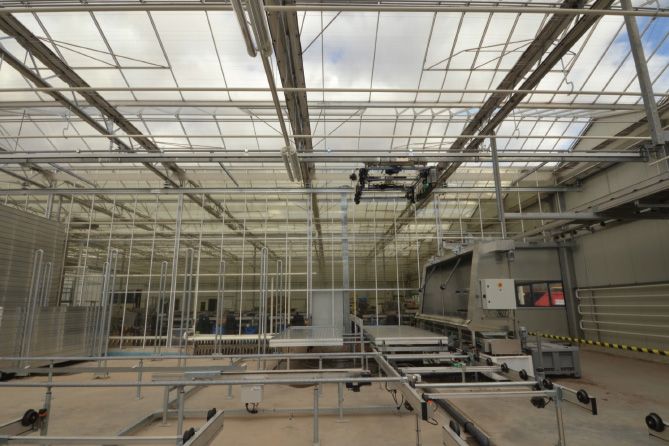 “Benches” usually don’t come to mind when one thinks of cannabis cultivation.

But while they have been increasing efficiency, maximizing space and reducing labor costs in the flower and produce industries for years, automated rolling benches are just now beginning to make their way into marijuana.

The benches are actually large metal tables on which to place your plants, and they can come in a variety of sizes. Some may have flat or sunken surfaces to accommodate plant trays, while others have surfaces consisting of rolling pins that make it easy to push heavy plants along the table. More advanced models can be outfitted with crane or shuttle systems that can move whole tabletops of plants around a facility.

But the most important feature common to all versions is that they can retract and separate to create aisles at multiple points along the table.

Here’s a closer look at how cannabis cultivators can use benches to take their grow sites to the next level.

A key advantage that automated rolling benches give growers is eliminating many or almost all of the aisles that are found in typical grow sites. Growers can then put plants where the aisles once were.

When growers need to review the plants, they can pull sections of bench apart to create an aisle to walk down so that they can inspect each individual plant on either side of the newly created path.

Put another way, conventional tables mean an aisle every other table. Automated benches essentially let you work with just one aisle that you can create anywhere in your room.

Thereby, rolling benches can maximize your canopy space, especially in large rooms, because what used to be aisle space is now filled with plants.

“The more rooms you have, the more aisle space you’re going to need. So these rolling benches allow people to go into a larger space and maximize it, and they have a catwalk on two or three sides and then all the aisles are floating,” Mattord said. “It allows people to go up in size, which brings all kind of different issues when you get bigger.”

Mattord estimated that a grower can gain up to 20%-30% of canopy in a room using these benches, depending on their experience, methods and other factors.

The benches also reduce the possibility of human error, Mattord said, because they can be retracted anywhere in the canopy to create an aisle for the grower to walk down and take a close look at the plants. When a grow team has more access to the plants, they can better spot problems like pests or if a plant is getting too little or too much water.

Some rolling bench companies also manufacture overhead cranes that are specifically tailored to transport the benches across facilities, a measure that greatly improves efficiency, cuts labor costs and reduces the strain on cultivation employees.

“You can either have an employee walking with a plant under each arm through an acre facility,” Mattord said, “or you have a whole table loaded up with plants, already trellised, and then a crane brings it to where it needs to go. That’s the type of automation we haven’t seen yet in cannabis, but it is coming soon.”

Imagine, for example, a bench that is 20 feet long, 5 feet wide and, depending on the strain, contains 30-45 plants that are supported with a built-in trellis system. The crane travels along tracks on the ceiling of the facility until it gets above the bench that needs to be moved. It then lowers grabbers that pick up the table with the plants on board before traveling along the ceiling tracks to the destination in the facility that it needs to get to.

The benches and cranes also come with accessories that can improve efficiency. For example, the overhead cranes can have hoses attached to them for cleaning empty plant benches from above. The benches can also be outfitted with irrigation and drainage systems that Mattord describes as low pressure but high flow. The systems are designed so that water will not spill when the tables are moved by crane within a facility.

“They have a lot of liquid moving through them, and if you ever have an issue, you can flood your facility,” Mattord said.

All in all, Mattord said, the bench and crane systems are particularly helpful when you’re moving plants from a vegetation room to a flowering room.

“You can turn your rooms over a lot more efficiently and lot more quickly, and with less labor,” Mattord said.

While Mattord said such bench and crane systems are new to cannabis, there are companies that are manufacturing them for cannabis growers.

“The Bentley” of these bench and crane systems and Mattord’s favorite is Hove, a German company, but he also believes GGS Structures in Ontario produces a good system. Less high-end but decent systems are also manufactured by Conley Greenhouses in California and Midwest Growers in Missouri, he said.

There are also many greenhouse manufacturing companies that are producing these kinds of benches, Mattord said, but they are the “Walmart” version of benches that may not be as durable and long-lasting as the more established names.

But Mattord notes that for some smaller and more cash-strapped grows, even the lower-end versions can be good options, providing efficiencies and savings that the companies wouldn’t enjoy without a bench system. You can also phase into the different bench systems, Mattord said, opting for less expensive models first and then upgrading when you feel the need or have the capital.

If you have a hard time deciding which bench variety might be best for a grow environment, greenhouse suppliers are a good resource, Mattord said.

Whatever brand a grower decides to go with, the benches can be built to any size that the grower needs for their cultivation site.

The cost of installing a basic roll bench starts at $3-$5 per square foot, Mattord said, and then increases as you incorporate accessories like cranes and specialized irrigation and drainage systems. A top-of-the-line model with those accessories would be closer to between $6-$12 per square foot.

“It pays for itself because you gain canopy space and because it reduces error,” Mattord said.