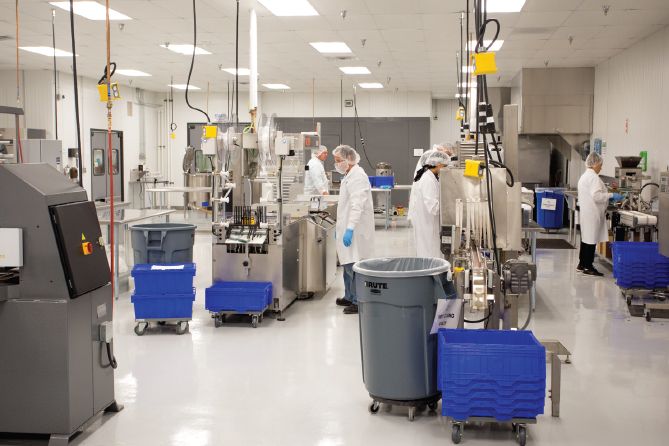 The brothers behind the Seattle-based Zoots brand initially considered taking their lozenges, baked goods and other cannabis-infused products national by getting licensed in each state and setting up shop. But then the three siblings did an about-face and decided to get other companies to do the work for them.

The Devlin brothers – Patrick, Michael and Dan – founded Natural Extractions in 2015 to hold the trademarks, copyrights, recipes and other proprietary information involved with Zoots. The Seattle company used licensing deals to expand the cannabis brand from its home state of Washington to Colorado and Massachusetts.

Under the company’s business model, Natural Extractions gets paid a fee from licensees that want to make and sell Zoots products. The edibles manufacturers help Zoots reach new markets and transform the label into a national cannabis brand – without Natural Extractions having to shell out big bucks to establish manufacturing and marketing operations in each state. In return, the licensees consult with Natural Extractions’ staff on how to set up production facilities, what equipment to buy and how to create Zoots brand products.

“What licensing a brand does is bring instant expertise to a manufacturer,” said Patrick Devlin, co-founder and president of Natural Extractions.

“A state manufacturer can be well situated and well financed to be able to get a license, but then they need products, so by licensing they don’t have to do all the product development it’s going to take. They can come to Zoots, and we can give them a full package to be able to manufacture and get to market quickly.”

Natural Extractions has enjoyed notable growth, and the Devlin brothers have set their sights on transforming the company into an edibles powerhouse.

The co-founders initially gained attention in the summer of 2014, when their firm, Db3, became the first manufacturer in Washington state licensed to produce edible forms of marijuana. The brothers still own Db3, but today the Seattle-based manufacturer operates as another licensee of Natural Extractions and is responsible for manufacturing and marketing Zoots in Washington.

The brothers then turned to other companies to expand the brand.

In the spring of 2016, Natural Extractions signed a license agreement with Denver-based Bronnor Corp. to get Zoots into Colorado. The following spring, the company announced a partnership with Cambridge, Massachusetts-based Sira Naturals (formerly known as Sage Cannabis) to expand Zoots into the Bay State.

Another partnership is close to being announced in Southern California – although Patrick Devlin declined to disclose the licensee. And Natural Extractions is tentatively eyeing four other states to enter in 2018 or 2019, Devlin said, although he declined to be specific.

“Our licensing revenue grew approximately 45% from 2016 to 2017,” Devlin said, although he declined to specify a number for last year. “I hate to make a projection on near-term growth, because it depends on our licensees – when they open and the regulations they operate under. Our long-term goal is to have total sales in excess of $300 million by 2024.”

Natural Extractions employs 34 people and temporarily sends its staff to states where it’s expanding the Zoots brand. Members of the team, including engineers, system operators and manufacturers, typically arrive after the licensee has selected a location for its manufacturing plant and received the necessary regulatory approval to make cannabis products. Staffers consult with the licensee on various stages of the manufacturing process, from setting up a facility to packaging products.

Licensees are provided with the Natural Extractions’ proprietary Cypress Extraction System, which utilizes a cryogenic, alcohol-based method to distill cannabis oil for use in edibles products. Partner companies are also set up with a bottling line for ZootDrops concentrates and a packaging line for a wide array of products.

“It’s basically a turnkey system. We call it ‘MIPs in the box,’” Devlin said, referring to marijuana-infused products.

Not every MIP facility that produces Zoots has the same layout. The manufacturing facilities in Seattle and Denver – owned by Db3 and Bronnor, respectively – are about 25,000 square feet. Sira Naturals’ facility in Massachusetts is much smaller, closer to 3,000 square feet.

“That’s a problem with being a legacy brand,” Devlin said. “You make a lot of mistakes as you go along, but you learn from the mistakes, which is good and a benefit to the licensee.”

Sira Naturals’ smaller Massachusetts facility is a case in point.

Devlin said newer facilities can consolidate, cutting down on building and maintenance costs, because Natural Extractions has learned to be more efficient. For example, instead of keeping extra space for dry ingredients such as flour and chocolate as well as packaging material, Natural Extractions ships the materials from its larger operations on more of an as-needed basis.

“When our licensees place an order, we send them a kit that comes to them with all the basic ingredients except for the THC and water. We also send our packaging that works well with our manufacturing design, so they are able to quickly get the products on the shelves (of retailers),” Devlin said.

Natural Extractions’ licensees are not restricted to making only Zoots products. Sira Naturals, for example, manufactures Zoots edibles as well as its own line of products, including Honey Stix in jars and Microdose and Macrodose Caramels.

“This is one of the advantages of licensing: Our licensees learn from our expertise and then they’re able to do a white-label brand with their own name on it,” Devlin said. “We think that the most successful manufacturers out there will be manufacturing other brands.”

Within the cannabis industry, an edibles brand is only as good as the number of dispensaries that want to carry the products and the number of customers who want to consume them. That’s why Natural Extractions dedicates 5%-7% percent of gross revenue to marketing Zoots each year, Devlin said.

“That’s our part,” he said. “We expect our licensees to contribute a significant amount to marketing as well.”

Licensees spend thousands of dollars to market Zoots. Marketing regulations vary from state to state. But for the most part, traditional forms of advertising are limited. Licensees assist in marketing the Zoots brand by keeping budtenders educated about the benefits of the products, asking retailers for highly visible shelf space and using in-store advertising on video monitors, posters and countertop flyers.

From the company’s early days, Zoots advertisements in print publications suggested the brand was “the Johnny Walker of pot” and included “normal-looking people like you’d see in a stock photo,” Devlin told Forbes in 2015.

The hope was that featuring ordinary (and sometimes older) people using cannabis would suggest quality marijuana could be used in daily life.

Natural Extractions keeps details close to the vest about where it spends its marketing dollars. But Devlin said the budget is intended to reach its three customer types: dispensary managers, marijuana customers and budtenders.

“You can do non-infused samplings and product displays. Most stores will have ‘meet the vendor’ days, where people come and set up. That’s all a part of it. But it has to be a total package, and you can’t rely on just one thing,” he said.