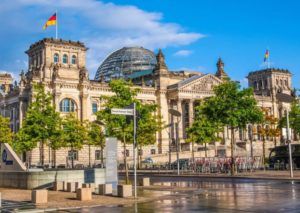 One of the German government coalition parties clarified its stance on recreational marijuana last week in favor of decriminalizing possession and allowing pilot programs involving the legal distribution of adult-use cannabis.

With the Social Democratic Party of Germany (SPD)’s new position, a majority of the members of the German parliament represent a political party in favor of some type of recreational marijuana reform.

It’s also the first time that one of Germany’s major parties and part of the government coalition officially favors reform.

The move is seen as a positive because it represents a step forward. But a long and uncertain path remains before any material adult-use cannabis reform takes place in Germany.

So does the Alternative for Germany, although those two political groups are unlikely to combine forces for a federal government coalition.

The SPD’s position was received with criticism by members of its Union partner.

For example, Daniela Ludwig, the government’s drug commissioner, was critical of the SPD’s new position, tweeting that “prevention is the answer” and linking to a website named “quit the (expletive).”

But he regrets that the SPD faction in the parliament health commission previously voted against an FDP motion that would’ve allowed experiments with controlled distribution to adults.

“The SPD did not put forward any substantive arguments when they voted against the proposal,” Schinnenburg said.

“The government has so far blocked all attempts to liberalize cannabis policy,” he continued.

“We must therefore continue to do a great deal of persuasion, although I often have the feeling that many members of the Union have a hard time accepting factual arguments on the subject of cannabis.”

“It brings further movement into the necessary discussion about the German cannabis policy,” it said in a statement.

But he believes it’s a positive development that Germany’s political situation is more favorable than ever for recreational marijuana reform.

However, parties that want some reform differ on how to do it.

According to Witte, “It would be unlikely that the ruling SPD would support any motion by the opposition parties that goes against their own coalition partner the Union. This would postpone or push any decision towards the next general election.

“But we can be certain that cannabis policy liberalization will be addressed during the next government’s coalition negotiations.”

In a position paper, the SPD parliamentary group announced a move away from prohibition, calling for:

“We see the regulated distribution of cannabis to adults in Germany as a good chance for a successful policy, ideally supported by simultaneous strengthening prevention and early intervention as well as counseling and treatment,” the SPD paper noted.

“Model projects, which allow different ways of regulated cannabis distribution beyond medical use, can help to find the right way.”

According to the SPD paper, “Neither prohibition nor prosecution has so far led to a decline in cannabis use.”

The party argues that “cannabis use is increasing without break” and that “repressive measures” cause stigmatization and social exclusion.

Prohibition also causes an “enormous financial and personnel” burden on the justice and the police, according to the paper.

Several municipalities have sought permission to experiment with legal recreational marijuana in the past. But they all failed after objections from the Federal Institute for Drugs and Medical Devices (BfArM).

“We are convinced that local authorities must be free to decide whether or not they want to enable such model projects,” the SPD stated.

“We want to give the States the opportunity to transfer the responsibility for licensing to the local authorities, so that nothing more stands in the way of model projects for controlled cannabis distribution at local level.”

How distribution would work, and whether it would include private companies, is uncertain.

The SPD also wants the Narcotics Law to be amended so that possession of small quantities of marijuana is treated as an administrative, instead of criminal, offense.

The SPD paper concluded by acknowledging that the party would have to negotiate any potential reform with its coalition partner, the Union.

Saskia Esken and Norbert Walter-Borjans – leaders of Germany’s SPD since December – and other members of the party previously hinted that they were in favor of a new marijuana policy, but the official position expressed by the government party last week marked an important step toward reform.

Three of the four opposition parties with parliamentary representation – The Greens, the Left and the FDP – have supported cannabis reform in one way or another for years.

Kirsten Kappert-Gonther, the spokeswoman for drug policy of the opposition Greens, told MJBizDaily that “we have a majority across government and opposition parties on this issue, with the liberal and leftist parties favoring cannabis liberalization.

“The conservatives, by contrast, hold up the dangerous prohibition as a symbol, like they held up nuclear power or the ban on same sex marriage.”

She added that Germany “can learn from the experience in Canada. I am confident that we can change the law soon.”

The next German elections are expected in 2021, although the current turmoil engulfing the country’s politics means elections sooner cannot be ruled out.