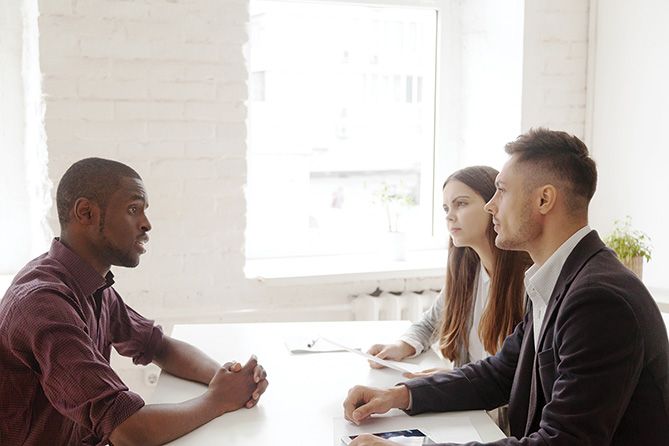 You’ve been offered the job. But can you get the salary you want? Of course—provided you know the fundamentals of negotiating, said Tony Perzow, CEO of You Suck at Negotiating, his negotiation training and consulting firm in Venice Beach, California.

ADVERTISEMENT
Perzow, who’s trained executives in negotiations at Apple, Google, Microsoft and other major companies, ticked off the following four factors to keep in mind when negotiating your salary:

1. Establish what you want

Many people enter negotiations without having defined what they want and where to draw the line.

“Before anyone goes into a negotiation, they need to get some clarity,” Perzow said. “Most people go into negotiations having smoked a little ‘hopium.’ They just hope they’ll get what they want. You need to be prepared.”

A good way to prepare is the following short exercise—it takes maybe 15 minutes—to establish your compensation priorities in terms of:

“Most people go into negotiations with a single-point objective, a single number they hope to earn,” Perzow said. “But you also have to know at what number you’ll walk away from an offer.”

2. Determine how much leverage you have

Another short but important exercise to do before the negotiation is to see how much leverage you and your prospective employer have. Perzow suggests candidates take a sheet of paper and create a “leverage ledger” that asks questions such as:

“Anybody going into a negotiation for salary needs to understand their leverage. Interviewees often assume the company has all the cards, but when they do this exercise, they’ll see they have more leverage than they think,” Perzow said.

3. Set the Reference Point for Your Salary

Once you know your compensation parameters and how much leverage you have, you’ll be better able to execute a third key salary negotiating strategy, one that Perzow calls “anchoring.” The anchor is the first number a person sees and makes decisions based on. So, if you want a $100,000 salary, don’t ask for $100,000; ask for $110,000 or $120,000, because the hiring manager will likely try to negotiate your salary downward.

“When you’re talking about negotiations, you always want to be the first one out of the gate to set the reference point in that negotiation,” Perzow said. “Oftentimes, companies will say, ‘What kind of salary are you looking for?’ That’s a great opportunity for you to anchor them to a number that is more beneficial to you.”

But don’t propose a ridiculously high anchor that risks turning off your interviewer. That means you need to research what comparable posts in different industries pay.

4. Ask for Things in Return

It’s important to do some trading during the negotiating process. “You need to be ready to ask for things in return. One of the most important things that we do in a negotiation is trading,” Perzow said.

Most people make concessions for free, Perzow said. They want $90,000 and four weeks of vacation per year, but they take $70,000 and two weeks. If an offer is less than what you expected, then ask for something else.

To do that, Perzow said, candidates need to exercise what he calls the “if you” rule. That means, if an interviewer offers you something less than what you expected, you don’t reply, “I’ll take it.” Rather, counter with “I’ll take the offer if you…” and then finish the sentence with something you want, like “pay for a professional development class” or “let me work from home once a week.”

“People need to understand if they’re going to make concessions in a negotiation, they should always ask for something in return,” Perzow said. “Don’t ever make a concession without saying ‘if you.’”