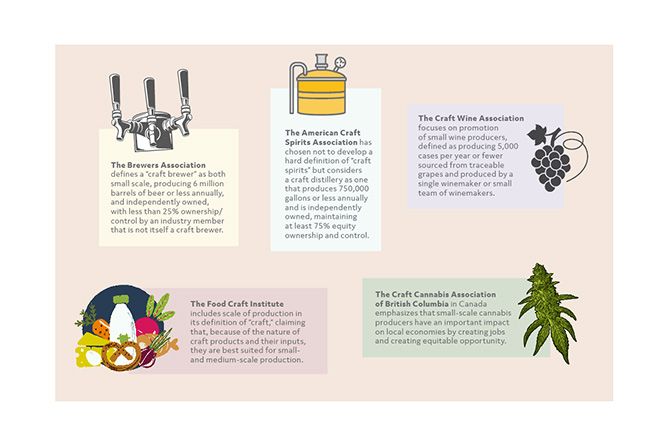 While “craft cannabis” remains an undefined marketing term, experts from other agricultural industries have attempted to include scale as part of their definition of craft production. In some cases, the nexus of scale of production, independent ownership and economic impact are included in this definition:

The Brewers Association defines a “craft brewer” as both small scale, producing 6 million barrels of beer or less annually, and independently owned, with less than 25% ownership/control by an industry member that is not itself a craft brewer.

The American Craft Spirits Association has chosen not to develop a hard definition of “craft spirits” but considers a craft distillery as one that produces 750,000 gallons or less annually and is independently owned, maintaining at least 75% equity ownership and control.

The Craft Wine Association focuses on promotion of small wine producers, defined as producing 5,000 cases per year or fewer sourced from traceable grapes and produced by a single winemaker or small team of winemakers.

The Food Craft Institute includes scale of production in its definition of “craft,” claiming that, because of the nature of craft products and their inputs, they are best suited for small- and medium-scale production.

The Craft Cannabis Association of British Columbia in Canada emphasizes that small-scale cannabis producers have an important impact on local economies by creating jobs and creating equitable opportunity.

A handful of U.S. states have developed cultivation licenses aimed toward small-scale production—often defined as less than 5,000 or 10,000 square feet of production. In some cases, states have done this to encourage industry involvement by less-capitalized entrepreneurs.

Other states have hampered the development of craft-scale marijuana production through their licensing regulations. Vertical integration, caps on the number of licenses available and high licensing fees encourage license holders to produce their maximum canopy allotment to meet consumer demand and/or recoup their licensing fees.