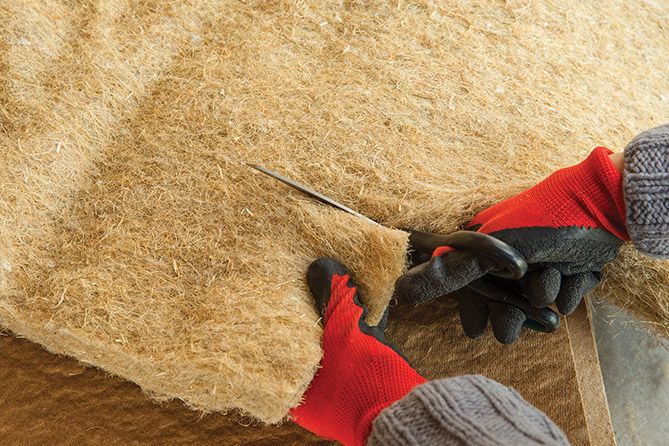 Attentive shoppers walking through a Macy’s department store last winter might have spotted a rarity in the bedding department: hemp sheets, advertised as being 100% made from the plant’s fibers.

The sheets were a rarity because such textiles are “a brand-new category” in the market, according to Michael Twer, who founded Delilah Home, the Weddington, North Carolina-based company that makes the product.

Currently, 100% hemp textiles cannot be made in the United States because of a lack of equipment. “There is no American hemp fabric yet made from American-grown hemp,” said Guy Carpenter, president of Bear Fiber, a Wilmington, North Carolina-based supplier of fiber produced from hemp and other sources.

Getting hemp from a farm to Macy’s or any other store is a time-intensive process that requires patience and a bit of luck. It doesn’t hurt to have connections with overseas factories that have machinery and technology for hemp spinning.

In the United States, the technology is nearly nonexistent because growing hemp commercially has been illegal for decades and textile manufacturing largely moved overseas years ago. So Twer, who lives in Matthews, North Carolina, has had to make his products at a family-run factory in Portugal.

“The U.S. does not have the machines or the technology yet to produce the high-quality textiles that I want to produce,” said Twer, who also serves as chair of the Fiber Council at the Organic Trade Association.

Twer developed connections with factories overseas through his previous job as general manager and vice president for a European company that made organic cotton. But by January 2019, the company was sold and his position was eliminated.

His idea for hemp sheets was born shortly after the family dog, Delilah, went missing for 62 days in the North Carolina mountains before neighbors helped find her. As a tip of the hat to the dog’s rescuers, and to give back to the community, he named his company Delilah Home and decided to donate a portion of profits to organizations such as Beds for Kids in Charlotte, North Carolina, and 1% For the Planet in Burlington, Vermont, which donates to environmental nonprofits worldwide. The company also has donated sheets and fabric bags to Love to Sew Studio in Pennsylvania to make face masks for hospitals, care facilities, veterinarians and police during the COVID-19 pandemic.

Sales were sluggish to start in November, when Deliah Home launched, but the few hundred sets of bedsheets Twer had at Macy’s sold out by the end of March. Twer also sells the sheets through Amazon, Zola and on the Delilah Home website.

The sheets aren’t cheap: A king-size set sells for as much as $800. So why would consumers buy hemp bedsheets?

“It’s one of the most durable fibers there is in the marketplace,” Twer said. “It’s breathable, so when you’re putting (hemp) into bedsheets, it allows the heat to be released … versus a microfiber, where you get in the sheets and you sweat because the heat doesn’t have a chance to release.”

Twer and others say it’s possible prices for hemp textiles will come down eventually. The demand is there, he said, but there isn’t enough processed hemp fiber. That’s because making hemp textiles is an arduous and expensive process, especially when the right machinery isn’t readily available.

“Everybody wants to buy something that’s made out of hemp, and that’s great,” said Jeffrey Silberman, a professor at the New York-based Fashion Institute of Technology. “They see that farmers are growing hemp, and they see that all of a sudden hemp products are available. And on some level, I think that they’re missing the fact that between the farm and the finished products on the shelves, there’s a whole world … of processing fiber—processing for yarn spinning, in particular—that isn’t being done here.”

Other Countries Ahead in Hemp Textiles

Countries outside the United States have been using hemp for decades.

“China is one of the largest suppliers of finished hemp textiles, even though their processes are not environmentally friendly. Europe is the second-largest producer, where France has had a stable industry and hemp supply chain,” said Geoff Whaling, chair of the National Hemp Association. “They are one of the only countries to have never banned hemp.”

Markets in India, Poland, Portugal and Romania are growing, which Whaling said “speaks to the growing consumer demand.” A U.S. company that wants to mass-produce a hemp textile line globally would have to be assured a continuous supply of “cottonized” hemp, he said. “That does not exist today.”

To cottonize hemp is to cut the fibers short enough—to about the same length as cotton, 1 to 2 inches—so that the hemp can be spun on cotton machinery.

Carpenter, whose company specializes in cottonization, has been making and selling clothes for other brands for 35 years and has spent 20 of those years working with a partner in China to develop different blends of hemp and other fibers to make yarns for textiles. China is the No. 1 source of textile-grade fiber—not the type of hemp fiber used for composites or for paper, Carpenter said.

The challenge of developing hemp fibers from U.S. hemp, Carpenter said, doesn’t begin with machinery; it begins with growing the plant differently than the way it’s done for CBD.

“We have to encourage farmers to grow hemp for fiber,” Carpenter said. “When you grow (for) CBD … you’re growing it like a Christmas tree, so that it has lots of branches and flowers.”

“For us,” he continued, “the only thing we care about is the stalk. We’d like it to be no thicker than a chopstick usually, or a No. 2 pencil, and usually that means it’s about 6 to 8 feet high.”

Hemp grown for long fibers, which can be as tall as 12 feet, are planted extremely close together so the plant doesn’t grow branches and instead uses all its “energy to grow up, up and straight, to create long, parallel fibers in the plant,” Carpenter said. That, he said, is how you make textile-grade fibers.

Once those are cottonized, the “fiber can be utilized in 99% of the world’s yarn-spinning industries, which are all designed to process fiber from a general length of cotton fiber,” he said.

Carpenter said his company is working with a cotton gin manufacturer, the Lummus Corp. in Savannah, Georgia, to develop an affordable hemp decorticator. Decorticators, which can cost more than $2 million, separate hemp components using hammermill technology, through which the plant is hammered, rolled or crushed into its components.

“We’re going to make sure farmers get a seat at the table in the fashion industry with hemp,” Carpenter said. Farmers can “extend their business life” by planting hemp when they’re not cultivating cotton, he said.

In fact, a Dallas company called Panda Biotech, for which Carpenter is a consultant, plans to build a processing center with two large decorticators in Shallowater, Texas. The company also is giving interested farmers 60 tons of seeds for hemp fiber.

Ty Stukenholtz, a farmer and agricultural engineer in Auburn, Nebraska, said he believes research into plant genetics for hemp plants that produce the best fiber would go a long away—as would some ingenuity when it comes to processing equipment. Stukenholtz and his brother, Jay, are planning to plant 20 acres of hemp this year, including a hybrid called “Abound,” which Stukenholtz said has been bred for multiple uses, including fiber, seed and oil. Made by New West Genetics in Fort Collins, Colorado, the plant grows shorter, about 6 feet—or around half as much as some plants.

“A farmer would have choices now,” he said.

Ty and Jay Stukenholtz developed their own version of a decorticator by connecting a John Deere S Series model with equipment they call the “Interceptor Hemp Harvesting System,” which is designed to perform some of the same tasks as a decorticator and is “capable of processing large volumes” of hemp.

The brothers are doing a limited production run to sell the equipment this fall, with the Interceptor priced
at $70,000.

“It may not be the finished product needed, but it certainly has the potential to aid in the process of breaking down the hemp fiber into its components, bringing it a step closer to mass production for textiles and other uses,” he said.

Ultimately, the goal is to be able to produce hemp fiber affordably, at a large scale.

“The textile market is already established at a low cost, so to be competitive, all the equipment involved needs to be large scale,” Stukenholtz said.

For Twer’s sheets to be 100% hemp, they weren’t cottonized but rather spun on traditional hemp line spinning, Silberman said.

“I don’t know of anybody that’s putting in a new, long-line hemp spinning, but I do know that people are converting all of their cotton spinning to a cotton and hemp blend,” he said.

Silberman said it is possible for hemp textiles to catch on, but with some caveats—No. 1 being “if the investment in infrastructure and time were put into it,” he said.

The bigger questions, he said, are whether American hemp can be successful, and whether U.S. companies can participate profitably, including the farmers. “The growing is not a problem, but the fiber processing through yarn-spinning equipment is,” Silberman said.

Hemp textiles also have a lot of competition, he said, adding that global production of cotton is roughly 25 million metric tons a year. Polyester is much more than that, Silberman said.

“You have a market where you can get market share, but you can’t possibly get your production to 25 million metric tons to truly compete with cotton,” he said.

Sarah Harf, CEO and founder of San Francisco-based MoonCloth Designs, which supplies hemp products and textiles to luxury hotels such as Soho House and Casetta Group, said educating farmers and the public is a big part of the challenge in advancing the industry.

“People think hemp is CBD; it’s not,” she said. “CBD is one very tiny element of the hemp industry. Europe and Asia have been doing industrial hemp for decades, so there’s a lot we can learn from them, and we just need to be able to adapt out here and be able to start investing in these larger supply chains.”

Twer, for his part, remains encouraged by his business.

But he’s also realistic about how long the industry has to go to master producing hemp textiles on a massive scale.

“There’s obviously a science, and we’re just not there yet,” he said.