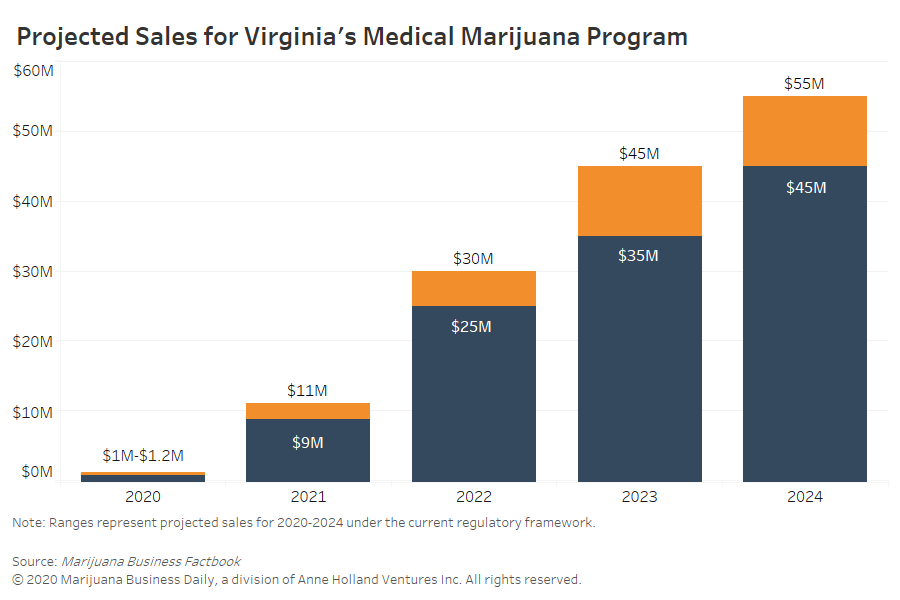 Virginia’s limited commercial medical cannabis program will be met with modest expectations when it launches, possibly within weeks.

ADVERTISEMENT
But proponents of the new MMJ market have lofty hopes for high growth and strong business opportunities – thanks to the possible rollout of flower sales in the next year or two.

For now, products are limited to cannabis oils, edibles such as lozenges and lollipops as well as vape cartridges with single doses capped at 10 milligrams of THC.

Despite the market restrictions and projections it will reach only $50 million in sales by 2024, Virginia is seen as a gem by licensees because:

The new Marijuana Business Factbook projects medical cannabis sales in Virginia will reach only $9 million-$11 million in the first full year in 2021, growing to $45 million-$55 million by 2024.

Those projections would be blown out of the water, however, if Virginia lawmakers allow flower. Such a move would open up the market to tremendous sales growth: Florida’s MMJ sales, for example, doubled once flower was allowed.

Erich Mauff, founder and co-president of Florida-based multistate operator Jushi Holdings, recently characterized Virginia as “nothing but a home run.”

He indicated during an interview with Marijuana Business Daily that Virginia plays into Jushi’s strategy to be in potentially high-growth markets that have limited licensing schemes so operators can establish dominant positions.

“There’s a good chance of flower and adult use in the next year or two,” Mauff said.

New York-based MSO Columbia Care, another license holder, is also bullish about adult use being legalized as soon as 2021 and has a similar take about the future of Virginia’s MMJ market.

The company said in a statement to MJBizDaily that it is “preparing for a dynamic market with high potential growth.”

Both Jushi and Columbia Care said they plan to open the maximum six dispensaries allowed.

The vertical license holders have created the Virginia Medical Cannabis Coalition to protect their interests.

But a separate industry group – the Virginia Cannabis Industry Association – has formed from Round One applicants that didn’t secure one of the five permits as well as others that want to get into the business.

The group is fighting to open up the market to additional business opportunities such as stand-alone cultivation and retail licenses.

“We think limiting the availability (of the market) to five companies doesn’t encourage the type of competition that would be helpful to consumers,” said Rebecca Gwilt, executive director of the industry association.

Jushi, which operates dispensaries under its Beyond/Hello brand, also agreed to loan up to $15 million to build out the operation.

The other active licensees and their regions are:

In June, the state stripped financially troubled MedMen of its license for not moving forward on its Staunton-based location. MedMen had acquired the license from Illinois-based MSO PharmaCann as part of a collapsed merger.

Jenn Michelle Pedini, executive director of Virginia NORML, said the state Board of Pharmacy confirmed last week during a medical cannabis legislative work group that it will open up applications for MedMen’s vacant license before year-end.

Lawmakers have slowly improved the business opportunities for Virginia’s medical cannabis program since enacting a 2017 law that permitted patients suffering from intractable epilepsy to use some types of cannabis oil with a doctor’s certification.

But industry officials and advocates want more licensing opportunities than what was provided in the first MMJ permit round.

The process of selecting the five MMJ licensees didn’t go over well with many of the 51 applicants.

“The process by and large was closed-door and lacked transparency, which led to litigation,” Gwilt said.

She said the licensing round had no explicit component to encourage industry diversity or give preference to in-state applicants.

“Virginia has a thriving agricultural industry, and many were disappointed to find out there was not a place for them in the current (marijuana market),” she said.

“We want the state to do some hard thinking about how best to structure the program, even if that means changing its philosophy from full vertical integration to having a more diverse set of licensing opportunities available.”

Simply put, Gwilt said, a vertical operation requires tens of millions of dollars of investments and “does not allow for a great diversity of participants.”

Pedini said Virginia’s lawmakers have directed the Joint Legislative Audit and Review Commission to make recommendations about regulating and legalizing adult-use marijuana, a necessary step toward a possible commercial program.

Both Pedini and Gwilt noted that the Virginia Legislature became Democratic-controlled in 2019 for the first time in many years.

That could bode well for more rapid progress. But Gwilt said the new lawmakers are getting educated on marijuana, and the current focus is on criminal justice reform, not commercial recreational marijuana.

In the meantime, existing medical marijuana operators are getting closer to launching the market.

Columbia Care, for example, announced with its second-quarter results Monday that it recently started growing marijuana in a new 62,000-square-foot facility. The company expects to open its first dispensary later this year.

Dharma, though, is expected to be the first out of the gate, perhaps selling MMJ products within weeks.

The company has harvested its first grow, finished its first extraction run and is putting together its first product batch for approval, Pedini said.

All of which means Virginia is finally on the verge of launching a commercial, albeit limited, medical cannabis program.

As Pedini noted: “We started the process in 2015, and here we are in 2020 and finally going to see the first store open.”