The legalization of cannabis in Washington could trigger huge changes in the state’s medical marijuana laws and policies this year.

Case in point: Two state lawmakers have introduced a bill that would slap a 25% tax on medical cannabis sales at dispensaries. The proposed tax rate is similar to the one Washington will levy on recreational marijuana sales at retail cannabis shops under Initiative-502. If the bill passes, existing dispensaries would have to charge patients significantly more for medical marijuana, and that could ultimately limit growth.

“My concern is that if we have an identical product being sold with two different tax schemes we are likely to have significant leakage of recreational use into the medical channel,” State Rep. Ross Hunter, who spearheaded the legislation with Rep. Reuven Carlyle, said in a release. “This will create a black market and put us at serious risk of federal intervention.”

Expect more of these types of proposals throughout the year. Even though the medical and recreational programs are two different beasts, officials will try to align the two programs closely together. In fact, the state could very well restructure its medical marijuana regulations based on the new program covering retail cannabis sales, not the other way around.

That’s a different scenario than the one playing out in Colorado, where officials are relying heavily on the current regulatory structure covering medical marijuana as they craft rules for the sale of cannabis for adult use.

The reason for the different approaches is clear. Colorado has tight, comprehensive and effective regulations on the production and sale of medical marijuana. Washington’s medical marijuana program, on the other hand, is somewhat of a mess. The state’s MMJ law technically doesn’t provide for dispensaries, allowing only community gardens where patients can share cannabis. Yet roughly 125 centers currently exist – including a fair share of for-profit dispensaries – because some cities have taken a lenient approach to enforcement.

That means there are virtually no MMJ-specific regulations on these businesses. So it’s not surprising that the state would avoid modeling its retail marijuana industry after its medical one.

But Washington is in a bit of a quandary. Introducing regulations on dispensaries piecemeal essentially legitimizes them even though they are technically illegal. A broader solution is needed to clear up the situation for good. Eventually, we could see the two programs merge into one that would cover all marijuana operations, medical or otherwise. 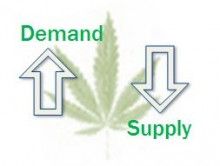