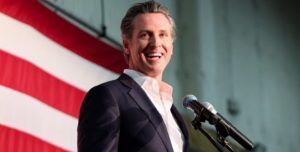 California Gov. Gavin Newsom swept into office in 2018 just two years after he was the most high-profile politician to champion adult-use cannabis legalization in the state.

With that history of support for the legal marijuana industry, many in the sector had hoped that soon after Newsom was elected he’d quickly take up some tough issues facing licensed California cannabis firms, including:

How has he done so far, according to MJ industry representatives?

Not nearly as well as many had hoped is the short answer.

Newsom’s connections to marijuana reform date to 2013, when, as lieutenant governor, he led a Blue Ribbon Commission on Marijuana Policy to craft recommendations on how to implement cannabis legalization.

He wrote an op-ed in 2016 calling for recreational MJ legalization, and during one visit to the Emerald Triangle in 2015, Newsom was cheered when he said he wanted to help protect the interests of small MJ farmers.

Newsom spent at least three years developing relationships and learning about California’s marijuana businesses, and he fostered a political image suggesting to many he would be a “warrior” – as one cannabis businesswoman put it – for marijuana industry interests.

But in recent months, conversations among MJ industry advocates in the California Capitol have turned more toward what they haven’t seen from Newsom: bold action to help stabilize a flailing legal market.

“I don’t feel like he’s failing, and I don’t think he’s getting an A+,” said Kristin Nevedal, chair of the International Cannabis Farmers Association, when asked to give Newsom a grade on MJ business issues.

Nevedal was also one of the stakeholders who worked closely with Newsom’s Blue Ribbon Commission.

Josh Drayton, communications director for the California Cannabis Industry Association (CCIA), said the Newsom administration has fallen short of what many of its members were hoping for, including support for issues such as lowering state cannabis taxes and persuading more municipalities to opt into the legal MJ industry.

“This is not the administration that we necessarily expected,” Drayton said.

Since taking office in January, Newsom has largely remained mum on marijuana in general.

During that time, his press office issued three statements that included the word “cannabis” or “marijuana”:

Drayton, Nevedal and others emphasized there’s only so much that can be expected from a new governor, especially in his first year.

They also hailed the hiring of Elliott, an industry-friendly regulator from San Francisco, and said Lori Ajax, the chief of the Bureau of Cannabis Control, has done great work in developing relationships with the industry.

“Have I lost hope that (Newsom will) be an ally down the road? Absolutely not,” Nevedal said.

“But it’s a sticky wicket to step in with a brand-new administration. … I’m kind of feeling like this has more to do with a first-year administration (finding its footing) versus a failure to be an ally.”

Nevedal did acknowledge, however, there’s a feeling among many of her small farmer colleagues in Northern California that Newsom neglected to follow up on pledges made during the Blue Ribbon Commission years.

To live up to those promises immediately, he would have had to come “out of the gate swinging – which would have been really, really hard (politically),” Nevedal noted.

Others in the marijuana industry also had varying takes on Newsom’s performance to date on cannabis industry priorities, with some saying he’s doing as well as can be expected and others expressing serious disappointment.

“For me to be disappointed in Gavin Newsom’s approach to cannabis, I would have had to have a high expectation for him going into office. I never did,” said industry attorney Matt Kumin, who has worked on cannabis social justice issues for years.

He gave Newsom a “B” when asked to grade the governor on MJ industry issues.

Industry consultant Ben Bradley echoed Drayton’s sentiment by saying: “He has not been the champion we were expecting.”

“I’m curious to hear, not just talking points, but what is their plan?” Bradley said, noting that Newsom’s administration hasn’t laid out much in the way of specifics on how it intends to replace the gray and black markets with a new, fully legal market.

But longtime political consultant Sean Donahoe said Newsom inherited a complicated and flawed regulatory system for which he’s not to blame.

“To say that he hasn’t delivered on expectations because he hasn’t fixed the unfixable is a lot of sour grapes,” Donahoe said.

“Perhaps we have false expectations of what’s achievable in politics.”

Elliott, the governor’s industry czar, was quick to push back on the idea that Newsom hasn’t performed the way a full-fledged MJ industry ally would.

“If the governor was not an ally, we would not be having this conversation,” Elliott said during a recent interview with Marijuana Business Daily.

She noted that Newsom created the job she holds because he wants to ensure legalization is implemented properly.

“The governor reflected his commitment to address so many of these issues simply by creating this position and by putting it in a space of economic development,” Elliott said.

She added in an email: “It’s unfortunate that CCIA feels the governor hasn’t done enough to show his support for this industry … As (he) has always indicated, getting to that end goal is a process that will take time.”

Elliott also pointed to Assembly Bill 97 as a major legislative victory for both Newsom and the industry, since the measure: