American Indian communities are increasingly collaborating to get a piece of the explosive growth of the cannabis industry by offering products based on tribal medicine from their ancestral origins.

The partnerships are helping break down longstanding barriers to Indigenous entrepreneurship in the marijuana and hemp industries.

“When we all are doing this together, we all win,” said Chenae Bullock, managing director of New York’s Little Beach Harvest and the Shinnecock Nation cannabis division, which has joined with Tilt Holdings, a Massachusetts-based multistate cannabis operator, to establish a vertically integrated marijuana business on Shinnecock tribal lands.

“I call them ancient trade routes,” she said. “We’ve been doing commerce with tribes since before colonialism.”

“In order for us to be competitive, we had to make it a collaborative, inclusive, sustainable ecosystem,” said Jeff Sampson, CEO at Everscore, an online marijuana marketplace working with the Native American Cannabis Alliance (NACA).

Three American Indian tribes – the Mohawk Nation and Cheyenne and Arapaho Tribes – announced this fall an agreement to dedicate 500,000 acres of land to cannabis cultivation.

The NACA was established in 2020, when the partners were working to develop a fulfillment center in Oklahoma as a way to get tribes involved in the cannabis industry, said the organization’s creator, Tim Houseberg of Stilwell, Oklahoma.

Because the supply chain was so fragmented, the effort turned into something much bigger.

“We just heard story after story about farmers who had the experience and wanted to participate, but they felt like the risk to actually commit to planting was too great because they couldn’t access markets,” Sampson said.

Now the alliance is working to establish connections between tribal nations and a network of commercial businesses to build a string of campuses that offer integrated solutions for cultivation, processing, manufacturing, testing and distribution as well as workforce development.

Farmers and tribes within the alliance will dictate what they want to grow based on their experience, knowledge and needs of the consumer.

“We’re going to be doing some modeling with various (partners) that are hemp fiber-specific, grain, flower and medical. Now they have a real easy platform to engage with,” Houseberg said.

Branded manufactured products will be sold directly to consumers through the Everscore e-commerce platform, which will provide Indigenous farmers with access to off-take agreements.

“What we wanted to do was … give these brands access to customers, access to technology, access to data (with) technology very similar to the way Amazon does it for their third-party sellers marketplace,” Sampson said.

Transparency throughout the supply chain was the name of the game to secure partnerships with multiple tribal nations, Sampson said.

“The industry is organized vertically, and it’s really hard to compete with the MSOs because it’s their grow, it’s their supply chain, it’s their retail storefront,” Sampson said.

NACA expects to begin discussions between Indigenous farmers and commercial brands this fall with the goal of being ready for the 2022 growing season.

When the Shinnecock Nation, a federally recognized tribe located on Long Island in New York, approved medical cannabis production in 2016, tribal leaders got to work and developed a relationship with Conor Green, a Chicago-based cannabis consulting firm.

Tilt also offered planning and design help and some $18 million in capital expenditures.

The deal allows a Tilt subsidiary to receive 11.25% of the Shinnecock Nation’s gross revenue, along with 18.75% of free cash flow from all Shinnecock cannabis operations for up to nine years.

The Little Beach Harvest facility is under construction in Southampton, New York, and will include:

The partnership is a “step forward” to promote equity for Indigenous people, according to Gary Santo, CEO of Tilt Holdings.

“To date, Indigenous people have been largely excluded from the social equity conversation across the country,” Santo said in the partnership announcement. 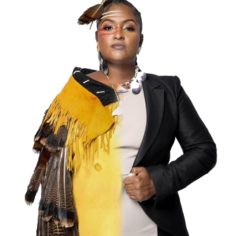 Bullock said the Shinnecock Nation hopes to have its dispensary completed in 2022. The team has been working with Brooklyn, New York-based public relations agency GVM Communications to tell the story behind the business and the products.

“There is a big responsibility that we, as a nation, have in this partnership to ensure that this comes through the product,” she said.

“The land, the hands that cultivated and the prayers that are put into it … that’s the background of all of our products.”

In addition to Little Beach Harvest, the tribe has the ability to license tribal members for cultivation, processing and manufacturing businesses of their own.

Not all business has been good business in the past, as some companies have tried to take advantage of tribal leaders. But that is changing, Bullock said.

“Within the last recent years, people are now becoming more culturally sensitive, so there’s been a little bit more of a stop-and-think sometimes,” she said.

“I think the best thing for people in my position to do is be cognitive of the stop-and-think and turn that into an educational experience in the industry, as opposed to being … belligerent and immature about it, understanding that (we’re) creating a humanitarian change.”

“The unfortunate part is our trade routes were interrupted and we were forced to be set on different sides, so now that we’re in an industry, those ancient trade routes can continue.”