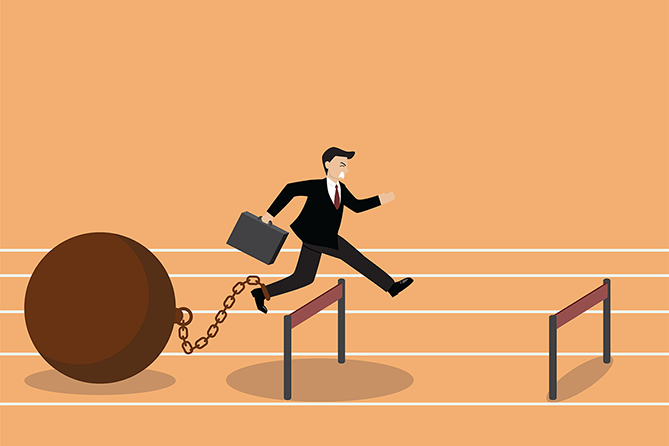 To improve their odds of securing a banking relationship, ancillary operators can work exclusively with licensed cannabis companies, create a professional presence and be upfront about their needs, according to industry executives. Ancillary businesses can also take steps, such as banking at multiple institutions, to ensure they’re not left without access to deposit accounts.

There’s a myth that banks and credit unions absolutely won’t work with the cannabis industry. But ancillary companies that don’t touch the cannabis plant or products often can access accounts from financial institutions, said Tyler Beuerlein, executive vice president of business development for Hypur, an Arizona firm that provides services and technology to banks that want to work with cannabis companies.

“Ancillary companies have a number of options throughout the country that will take accounts,” said Beuerlein, who also serves as chair of the National Cannabis Industry Association’s banking and financial services committee. “Some larger regional institutions are actually targeting those (ancillary) operators. They don’t want to bank plant-touching operators, but they’re actively looking to increase their deposits, so this is an attractive way for them to do that.”

Finding a banking partner isn’t without its challenges for businesses that supply cannabis companies with equipment such as grow lights, software, legal advice and other goods and services.

Data released by the U.S. Treasury’s Financial Crimes Enforcement Network (FinCEN) shows the number of banks and credit unions actively banking marijuana-related businesses has increased steadily, reaching 715 institutions at the end of the second quarter of 2019, up from about 400 in early 2018. (See chart on page 152.)

But Beuerlein believes those statistics overstate the true number of depository institutions openly banking cannabis businesses. He estimates that fewer than 100 of the more than 4,000 commercial banks and 5,000 credit unions in the United States are set up to work with ancillary companies.

Financial institutions might be averse to banking cannabis companies for a variety of reasons. Perhaps the biggest consideration is the risk banks and credit unions could expose themselves to with an industry that is still illegal in the eyes of the federal government. The Federal Deposit Insurance Corp., the Federal Reserve, the National Credit Union Administration and state regulators are among those overseeing financial institutions. Those agencies can issue penalties or disciplinary actions when banks and credit unions run afoul of the rules.

FinCEN issued guidance in 2014 for how financial institutions can provide services to marijuana-related businesses and comply with their duty to detect and prevent money laundering. Federal lawmakers have discussed a legal framework that would enable financial institutions to serve state-authorized marijuana businesses without fear of federal interference. The full U.S. House of Representatives passed the Secure and Fair Enforcement (SAFE) Banking Act in late September. Its prospects are less certain in the Senate.

While cannabis is still not approved on a federal level, many institutions have regulations around the percentage of revenue that can be derived directly from the cannabis industry, said Christy Kline, managing partner of Denver-based Merritt Strategies.

“For an ancillary company wanting financing, the institutions that would be willing to lend will most likely set a concentration limit of 20% or less of revenue derived from the cannabis industry,” Kline said.

Operators with more than 20% of their business linked to the industry can probably rule out getting banked by national financial institutions. They should instead try to identify a small or regional bank or credit union willing to establish a relationship.

Companies can share whether they’re going to need wire transfer services, automated clearing house (ACH) payments or other tools to see if those services will be available and at what prices.

Every state has at least one option; you just have to know who it is, Beuerlein said.

“Something we’ve done for years is, anytime an operator calls us, we will pair them with the appropriate institution even if they’re not our client. I’ve sent hundreds—if not thousands—of operators to the bank or credit union that they’re banking with today,” Beuerlein said.

In some areas, ancillary businesses will be able to decide between multiple financial institutions based on location, costs and offerings, he said.

After a company identifies financial institutions within its state that are willing to work with ancillary businesses—either by getting referrals from those in the industry or calling various banks and credit unions directly—there are several steps it can take to secure banking services.

Be transparent about the nature of your business, said Dan Roda, co-founder and CEO of Abaca, an Arkansas-based firm that facilitates banking services for underbanked and nontraditional industries.

In addition to corporate documents, such as licenses, Abaca recommends ancillary companies provide banks with proof of identity for every owner of the business, proof of their residence—and, in some cases, background checks for those people.

“It varies, but we tell our cannabis customers to expect a much more involved and high-touch banking relationship than they might be used to because of the level of information that the bank is required to have is so much greater in this industry,” Roda said.

Banks will also look at companies’ websites and digital footprints for evidence the business is operating within compliance of state laws and as a normal, respectable enterprise with a track record and that it is “not just a front to launder money,” he said.

KushCo Holdings, a diversified ancillary company specializing in packaging and other goods and services including vaporizers, still encounters problems when working with the banking industry, said Nick Kovacevich, the California company’s CEO.

KushCo tries to abate some of the risk of losing access to financial services by banking with more than one institution.

“You always have to have irons in the fire. We’re set up with credit unions that will bank us and are openly banking the cannabis sector, so we haven’t had as many issues with those guys. And then we have gone through our series of national accounts,” Kovacevich said.

In early August, Kovacevich said KushCo had “two accounts set up with national banks, and we’re always living in fear one of those is going to get shut down.” By late September, the company said it was down to only one national banking partner.

“That’s just the nature of our industry,” Kovacevich said.

KushCo has developed several “know your client” policies to give its financial institutions and others confidence the company is not engaging in illegal activities or working with others who are not playing by the rules. For example, the company requires proof that its customers are properly licensed, tracks that deliveries are sent to licensed locations and has its website access blocked in states that don’t have a legal cannabis program.

“I like to keep my little list of banks that have turned us down and turned me down personally. Presumably, one day they’re going to come crawling back,” Kovacevich said.